In October, we spent time traveling in Ireland via a tour from Wild West Irish Tours in October, a prize for winning last spring's "The Wild West of Ireland: You Won't Forget Your First Time" competition produced by TheWildGeese.Irish. 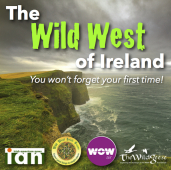 Dr. Michael Roberts of the Sligo Myths & Legends Summer School came to fetch us. He spoke about Carrowmore, the megalithic cemetery dating to about 5700 B.C., mentioning that, from the beginning, man has sensed a presence of a God who created all of creation, and that that worship has followed the cycles of nature: winter to spring to summer to fall, day to night, birth, childhood, youth, young adulthood, maturity, old age and eventually death.

Dr. Roberts explained how sacred spaces and living spaces were laid out in similar fashion.  He noted that sacred spaces often started at a source of water, typically a spring stream.  A circle was cleared around that spring by stripping the bark, causing the nearby trees to fall and clear that circle, creating a sacred grove at the heart of the new community.  The settlement was laid out in concentric circles that approached an oval shape as they grew larger.  The remnants of these are the basis for what are known as the fairy forts.

On our way up the hill to the stone circle and the large tomb, the sky turned dark, a strong wind whipped up sideways, followed by rain, and then ice, again, falling sideways. This lasted for about 10 minutes, and then the sun came out again.

From Carrowmore, Dr. Roberts took us to Tobernalt, a holy well.  The spring was created, according to legend, from the tears of a young woman for her dead lover, killed by a rival for her affections. She died of grief, and her tears, supplemented with father's, flowed into the spring, with the resultant stream filling Lough Gill. Meanwhile, her funeral pyre became lodged in the lough, becoming one of its islands.

Tobernalt has been a holy place from long before Christianity and is now a shrine to the Blessed Virgin Mary.  The site holds a plain stone pillar that served as an altar in the days when the Catholic Mass was outlawed. Dr. Roberts told us that we could lean into a hollow in the altar, or fit our fingers into a set of holes to ask for any physical ailment to be removed.

This place was the quietest, most still place I have ever been, despite numerous people there to pray.  I cannot describe the experience in words. It was one of the most meaningful moments of the tour.

The legend is related in more detail in Dr. Robert's book "The Cailleach of Sligo: Stories and Myths from the Northwest of Ireland," in the chapter "The Lake of Tears."  He tells it much more meaningfully than I ever could.

This sounds so wonderful! What an amazing time you must have had on your trip! I am so happy for you!

Have you read my article on the Holy Wells in Ireland, ??

Ah, but you've told your story well here! Thank you! I enjoyed this and learned something.