Doctor Arthur Price, Archbishop of Cashel, left 100 pounds in his will, for his godson Arthur Guinness advising that he "use the money wisely." Arthur Guinness did indeed use his inheritance wisely and he purchased a small brewery in Leixlip, County Kildare. In 1759, at the age of 34, he left the brewery to his younger brother and moved to Dublin City.

There, Guinness (pictured) decided to acquire what was then a small, disused and ill-equipped brewery at St. James's Gate, Dublin. The lease, signed on December 31, 1759, was for 9,000 years at an annual rent of £45. With diligence, clever business acumen and hard work, the Guinness brewery grew and prospered.

The steadily increasing output from Guinness’ Dublin Brewery in the Victorian era had reached such proportions by the 1870s that the movement of large quantities of heavy and bulky raw materials and waste products within the brewery was proving to be a serious obstruction to any future expansion. The existing methods (horse tramway, and horse and cart) were both slow and cumbersome and very inefficient. An observant employee named Samuel Geoghegan recognized the difficulties at the brewery and set about solving this major problem.

Knowing that the era of the horse and cart was over, he felt that speed and efficiency would be the answer. Using his skills and foresight, the young man designed and built a system of transportation that would revolutionize the movement of goods. The solution to the transport problem lay in the construction of a narrow gauge railway network serving the entire brewery. Much of the basic system was laid between 1873 and 1877 under his supervision. 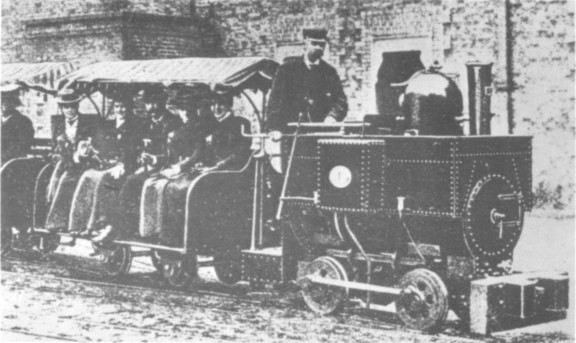 With the acquisition of land between the existing brewery and the River Liffey, further expansion was able to take place, and some activities previously carried out in the old brewery were transferred there. Moreover, as this land was situated near the Kingsbridge terminus (Great Southern & Western Railway), a direct connection with the Irish railway network could be created, with barges working to and from a quay on the River Liffey.

Geoghegan, a draughtsman and mechanical engineer, was born in Dublin in 1844 or 1845. In 1861, according to the English census of that year. He was a pupil of a schoolmaster named Richard Biggs in Devizes, Wiltshire and excelled in all subjects taught there. After leaving school he served a four-year apprenticeship in England with a mechanical engineer. Work as a draughtsman and mechanical engineer in both England and Scotland followed; in the English census for 1871 he appears as a fitter in Doncaster. He then spent 18 months in Turkey as a locomotive engineer and three years on bridge work in India.

He was appointed to the engineering staff of Guinness's Brewery in 1872. By 1899, he had become head of the company's electrical and mechanical engineering staff. He retired on July 9, 1901, at the age of 56, but was retained as a consultant until February 11, 1905. After his retirement, he ran a private practice from 17 Westland Row. He got married in 1876 and had five children. Samuel Geoghegan died in 1928 or 1929.

I find it very interesting  to read your articles pertaining  to Irish establishment or People who woudl ahve been on my Radar when I was growing up in Ireland.

This article and specifically the Miami Showband  ;  spoke to me of my youth.

Two of my Uncles worked  Guinness Brewery and several of my cousins still work for Guinness . It was and to my knowledge , still is, one of the best company's any person could work for.

They provided housing, health care and much more for all their employees ; in an ere when health care was  practically non existent. When one of my Uncles died following a very short illness ; the company provide ; private Hospital acre ; Flew one of my cousins home off the Guinness Merchant ship that he was working on ; Paid for the funeral and had a job line u p for my maternal aunt ; when she was fit enough to think about working. A pension to boot. Although it was one of these company's; that had a closed shop i.e sons of the man working in Guinness . They had a very good reputation .

At the moment I am doing a lot of research for the follow up to my book ; researching Guinness Brewery ; has given me a greater understanding of why my Grandmother  so badly wanted all of her children to work for a company like Guinness . Unfortunately, emigration had the bigger pull , as there was no work available

They are a great company and from such humble beginnings..........Their product doesn't taste half bad either......LOL

John, with no disrespect to yourself as the Guinness firm are nothing but very effective marketeers and I know you are quoting other published sources.  However, Arthur Guinness was hardly the Horation Alger that Guinness would like us to believe.  While much is made in Guinness Marketing literature of Arthur Guinness being a “daring entrepreneur” a man who  “  in 1759, took a chance and signed a 9000 year lease (on the Brewery at St. James’s Gate), at an annual rent of £45, on a disused brewery in Dublin…The Brewery then consisted of a copper, a kieve, a mill, two malthouses, stables for 12 horses and a loft which could hold 200 tons of hay.”   They neglect to mention that Arthur had received a considerable inheritance for the time with which he made the purchase and that the lease also covered a "comodious" house with a substantial garden and fish pond.  Certainly one does not have to be a bold gambler to take a “chance” on a business that comes with a mansion.

But you must agree that Sam Geoghegan was a fine engineer.

No disrespect to either you nor Mr. Geoghegan intended, he does seem to have been quiet an engineer.  I just marvel how Guinness has been able to market itself into being a "national symbol" surplanting the Book of Kells and the Ardagh Chalice.

Hello Neil F. Cosgrove ........... in my humble opinion , my research shows, that it is because Guinness did actually care for, and look after the welfare of their employees and their families  . They provided accommodation ; Health Care ; and other supplements, to aid ,support all the family to live a better quality of life.

Why am I doing this research = two of my uncles worked for Guinness !! .

Here is my research

Hello Neil ........... your research is excellent . all credit to you. However what I woudl say to you is, that in the face of mass unemployed, mass emigration,  poverty and deprivation, people living in tenements and squalor ;  Guinness was one of the best companies to work for. Most other companies did not have heath care , or provide accommodation for their employees...

Bearing in mind that for the most part, any man working for Guinness jumped at the chance of getting a job in Guinness Brewery  for their son's , that it was self preserving and a closed shop , did little to deter these men from applying for a job for their sons .

And bearing in mind too, most ordinary people were not politically aware . and that is why so many people were so opposed to the Leaders of the 1916 Easter Rising and the War of Independence.. They were afraid of change , afraid of what the British could do, afraid of war ........... all they wanted was a job and a roof over their heads.

Happy Christmas to you and yours

Geoghegan was, you must admit, a very fine engineer.

Merry Christmas to all.