You can imagine my surprise when I saw a large piece of wood washed up on Streedagh Strand recently. (For more information on the ongoing discoveries at Streedagh Strand go to Grange Armada Development Association Facebook page, or to the musicals page The Last Torch). If you have no clue what I'm banging on about you can peruse my Wild Geese Blog and/or my about me page to find out. In short, I wrote a musical called The Last Torch about my ancestors the O'Rourkes which centres around the shipwreck of Spanish ships off the west coast of Ireland in 1588. The shipwreck happened during the Anglo-Spanish War (1585 - 1604) when a great storm struck King Philip II of Spain's fleet which Queen Elizabeth I believed to be divine intervention. "Jehovah blew with His winds, and they were scattered" is a famous phrase about this fateful night. The storm was also called 'The Protestant Wind'. The phrase seems to have had its origin in an inscription on one of the many commemorative medals made in celebration (see image at right). 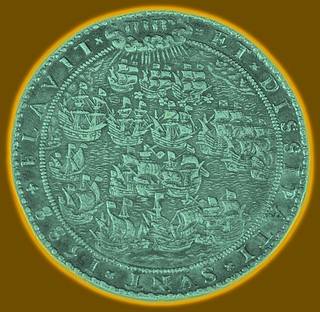 Captain Francisco De Cuellar was on the San Juan de Sicilian, when the storm struck. This was not on his own ship because he was sentenced to death for disobedience and thats where they did all the hanging. Anyway, a huge storm rips a few ships to pieces and Francisco survives leaving a fascinating account of his time in Ireland. Captain Cuellar's adventures in Connacht and Ulster

Last year the musical went to stage as part of the Melbourne Fringe Festival. The intention was to workshop it, to see it on stage so then I could polish up bits as needed.  It was the most challenging thing I have done in my entire life. With a cast of 19 I had to have the patience of a saint at times, but I won't elaborate here. The musical was rehearsed for 6 weeks and the pressure was immense. As if the pressure wasn't enough one of the leads broke his arm and another had his appendix out. The process was fraught with challenges. The band didn't come in till the last two weeks and boy was I grateful when they did. The kind encouraging words I received from the band, the cast members who supported me, my family's involvement in art design, costume making and bringing my family food as well as support from friends world wide spurred me on. I focussed on getting the musical to stage, so I kept my head down and kept pushing. There was a time when I felt so heavy it  felt like I was dragging a ship across the sand. Eventually she sailed and we had solid crowds and a sold-out final night.

I have been in limbo since last October when I witnessed the birth of my musical. My father, inspired by the story has painted a series of magnificent images and has continued to paint but his painting have changed. The paintings suddenly have a purple hue, capturing the energetic stillness, the twilight of this time. Waiting to see what this musical is meant to do. When I saw this painting my breath left me. There I am standing on the shore. The animals in the painting have a fascinating symbolism which if you look into makes for interesting interpretations. For me the symbolism is profound. This musical is about healing first and foremost. It has always been bigger than me and my intent is not for fortune or fame. This is what is good about it, this is what made it so easy to focus so long with so much passion and conviction. Now I wait and hope that I can faithfully represent those whose voices came out of the past and spoke to me at the outset of this seven year journey.

What a brave and tenacious person you are ; In the face of  adversity - you nailed it . Well done ; Just wish I had -have been in the audience .. As the Irish would say 'good on ya'

What a brave and tenacious person you are ; In the face of  adversity - you nailed it . Well done ; Just wish I had -have been in the audience .. As the Irish would say 'good on ya'

Thanks Mary! It was so challenging.Maybe one day you can vein the audience when we get to the west end!!

Would certainly love that ; just keep me in mind when you do get there OK

Inspiring. Best of luck with the musical and may your limbo bring out more of your exceptional talents. Also love the painting!