In doing some research for the follow-up book to "The Foundling," I needed to find out more about convict ships. I bought a few books and interviewed my Australian cousin, Keiran Hannon, who knows a lot about convict ships and is currently writing a book about them.

The books I bought were quite helpful. Bound for Botany Bay by Alan Brooke and David Brandon, The Great Shame by Thomas Keneally, and The Fatal Shore by Robert Hughes.

All convict ships were fitted out in Deptford, England. The ships were barks (or barques) that were converted to transport convicts. These ships had three or more masts. Between the deck and bulkhead was the prison, with prison bars. There were no hammocks for convicts to sleep on, they slept instead on benches.

The reason for the need for a penal colony was that the crime rate in the British Empire during the late 1700’s and 1800’s had skyrocketed. Petty crimes such as stealing clothes, clothing was scarce and people were so cold they stole it, were punishable with transportation to a penal colony.

Although laws in New South Wales in Australia were passed in 1841 to stop convict ships arriving from Europe, the ships continued to make the journey to Van Diemen’s Land until 1851. The reason for the NSW parliament making the law was that settlers were unhappy with the convicts being shipped to their lands.

A hulk was essentially a ship that was docked and used as a floating prison. Convicts were imprisoned on hulks until they were transported to either Botany Bay or Van Diemen’s Land. The condition of the hulks was often worse than the convict ships themselves. In Ireland in particular the hulk ships were very bad.

Convict ships transported male or female prisoners separately. This resulted in some ships with female convicts becoming notoriously known as "The Brothel Ships."

Female convicts were put in the coal hold if they didn’t obey orders. The biggest insult for women was getting their heads shaved as a punishment for misbehaving.

Lobscouse, a watery vegetable stew, and burgoo, a cheap porridge, were two meals that were born on the convict ships. Provisions were contracted by producers who often cheated with the amount of food provided by making false bottoms for casks or lacing provisions with large bones , nails, dead rodents, and horse’s hooves. This resulted in a shortage of food for the prisoners which then caused disease outbreaks.

Dysentery, pneumonia and scurvy were common on-board convict ships. Bark solution was used to treat scurvy, it was a mixture of lime juice and other juices. Sometimes the convict ships would stop at Cape Town in South Africa to collect more provisions such as oranges.

There were three main routes taken by convict ships; a direct route from England and or Ireland to Tasmania, England to Rio de Janerio, England/Ireland to Cape Town (summer) Simon’s Town South Africa (winter), and the final destinations were Tasmania, Botany Bay or Van Diemen’s Land in Australia. 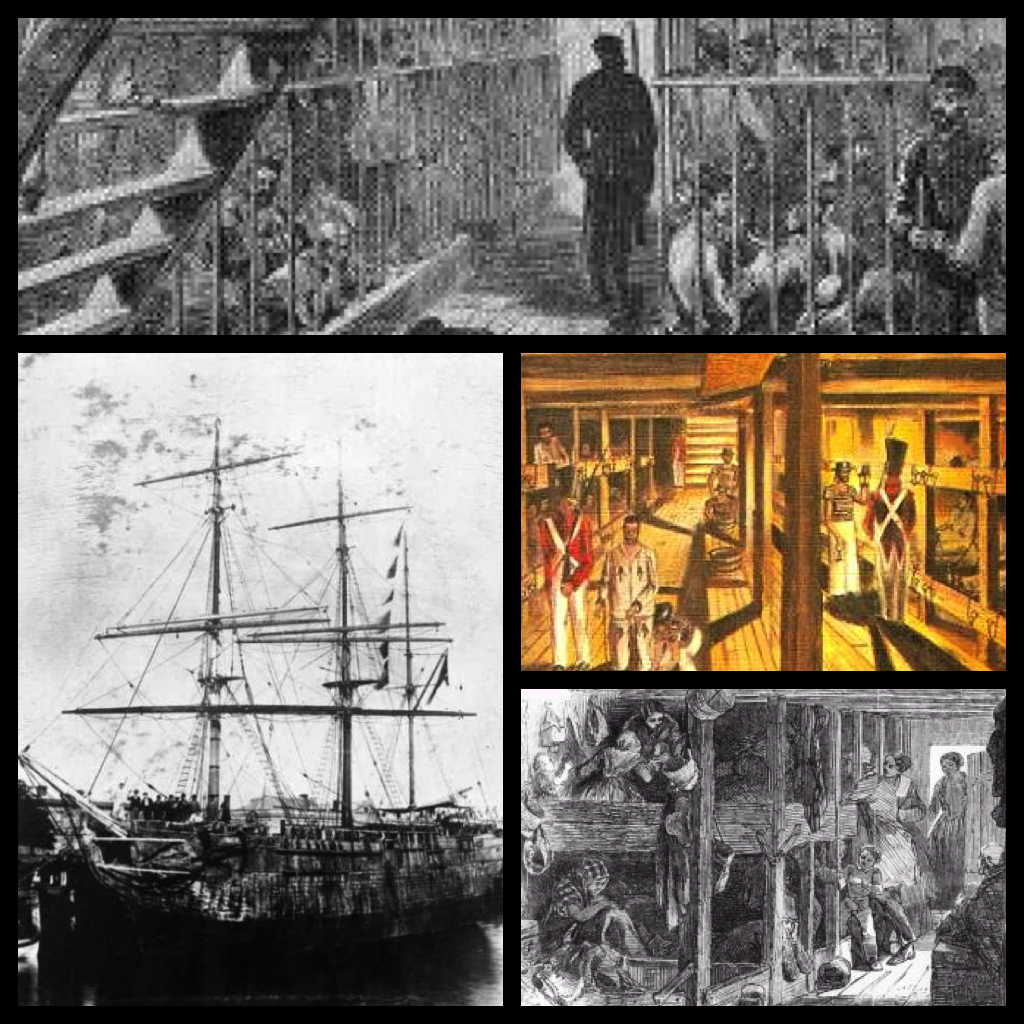 The most concise history of Convict ships can be attained from "The Convict Ships," by Charles Bateson. Here is a sample of some of the exact details about specific ships that Bateson provides in that book:

The most amazing thing I have read so far in my research about convict ships is that the most common crime committed was stealing clothing and that the coffin ships that left Ireland during the years of the great hunger had worse conditions than convict ships.

Where can I learn more about your book, "The Foundling," Lonnie?

Comment by Patricia Magiollo on January 20, 2015 at 7:55pm
Very interesting indeed. I know my great- grandfather sailed to Argentina( South América) in one of those so called "coffins" when the Irish famine.Very sad to remember.....

I remember researching Van Diemen’s Land after hearing (or so I thought) "Bandyman's Land" in a Tommy Makem and the Clancy Brothers rendition of "Black Velvet Band". This article is fantastic, full of history that's connected to you - I love it! I really got to start researching my family tree, I know so little of my Irish roots. Thanks for the share Lonnie!

Thank you Lonnie: You may perhaps be familiar with the text "Famine Diary" Journey to a New World by Gerald Keegan published in Dublin by Wolfhound Press, 1991 as a contribution to the AFrl Great Famine project. I read this vivid narraitive of conditions in Ireland in 1847 which was based on the diary kept by Sligo schoolteacher Gerald Keegan. Keegen with his young spouse Eileen immigrated to Canada under grave and deadly conditions of a coffin ship. I have read Famine Diary only once through over twenty years past, and afterwards did seldom lend it but once or twice to friends because the reading of it and the contemplation of the privation people endured on and after the ocean crossing was such a sorrow to bring back to life. There are two other Canadian books based on the Keegen diary: one under the title Summer of Sorrow 1895, and a fictionalized version Voyage of the Naparima,1982 both published in Quebec. I sometimes believe more than what I read. Our bodies then inherit and conceal in consciousness such hardships having lived through before still retains the deeper sorrow of what might have been to this very day. Only art and music, poetry and dance can address this desire to be connected to God and his creation. I plan to read the diary once more thinking all the while that Mr.Keegen wrote it intending that I would read it some hundred and sixty eight years later. Still it will be difficult to look back on it again.Blessings to all who remember a soul who went missing.

Thanks for the comments folks. And whoever did the layout of the article, Thank You, it looks great here. Hi Gerry, Thanks for your interest in my books. You may locate my book The Foundling by clicking on the link to my blog at the top. Larry I do own a copy of Famine Diary. I am using it to do research for a follow-up book to The Foundling, called Stained Glass. It is because of Coffin and Convict ships that Ireland, Australia, Canada and America are connected, and I wanted to delve into that more. Thanks again for reading and commenting. Lonnie

1. There had been a reduction in the number of crimes which were considered capital ( one can argue if hanging or exile where you likely would die on the ship or as part of a work gang is more merciful)

2. This was a time of great want as you allude to. Not only was there the great hunger, but the beginning of the Industrial revolution displaced many families with no support coming from the British Government. It was also a period of political unrest.

It was not so much an uptick in lawlessness but how the law was applied and the economic backdrop. Perhaps the most famous transportee was Jack Donahue who was the inspiration (though his name is often corrupted) for the song "The Wild Colonial Boy". He was transported for the crime of "INTENT to commit a felony".

Thanks very much for the extra information Neil. Imagine that? Being sent to a penal colony because you intended to commit a crime!

My GGGG-Grandfather, a respectable and wealthy Dublin brewer named John Murphy, was convicted of passing a forged bank draft and was transported to Van Diemen’s Land (Tasmania) on was the Waverley, which was a 436 ton barque built in Whitby in 1838. The Master of the ship was James Morgan, the Surgeon was Thomas R. Dunn, and it sailed from Kingstown on 25 April1841, arriving in Hobart 140 days later. 175 other convicts embarked in Dublin with John Murphy and 2 died on the journey.

Detailed ships' surgeon reports relating to the voyages of the convict ships are available from either the British Library, or the National Archives (sorry, I can't remember which). If you look on the Tasmanian governments website you can also find scanned images of the Conduct Record, Indent Record, a Description List and an Appropriation list that were compiled for each convict who was transported to Tasmania (I don't believe these are available online for any of the other Australian states). These provide wonderful information about the convicts, including a physical description, details about the crime they were convicted of, details of their family, work they may be suited for etc. Here is some of the information these reports gave about my GGGG-Grandfather:

Murphy served as Schoolmaster on board ship during journey

Should be employed – Schoolmaster

The "Waverley" appeared on the first Australian $5 banknote (now out of circulation).The bank note celebrated Caroline Chisholm, the "Emigrants Friend". (You could just make out the ship's name on the pennant atop the mast; it used to be a test of one's eyesight to see if you could read it. I very much doubt if I could read it these days!

Thanks for all the comments folks. All very interesting and I love to learn more about the details recorded for each person.