In France, during the reign of King Henry IV (1589-1610), a series of recurring religious conflicts erupted and grew so violent they became known as the Wars of Religion. The war was between the ruling Catholics and a group of French Protestant reformers, who became known as Huguenots.

The Huguenots, adhering to the tenets laid down by Protestant reformer John Calvin, demanded equal rights, political and military autonomy and tolerance of their religion. As they grew in numbers, and became more insistent, the French government issued the Edict of Nantes. The edict granted their demands and the conflicts subsided. During the reign of King Louis XIV (1643-1715), renewed religious warfare prompted the abolishment of the political and military privileges of the Huguenots. Louis progressively increased persecution of them until he issued the Edict of Fontainebleau (1685), which abolished all legal recognition of Protestantism in France, and forced the Huguenots to convert. While nearly three-quarters eventually were killed or submitted, roughly 500,000 Huguenots had fled France by the early 18th century.

In 1788, a young boy, the son of a Huguenot family who had fled the conflicts in France, left school at age 14 and ran off to sea. On one of his voyages, the ship ran aground and sank due to incorrect guidance information. Many of the sailors drowned, and the survivors, including the young boy, were shipwrecked. This life-altering incident left the boy with a keen, and lifelong, awareness of the value of accurate maps and charts for those risking their lives traveling the open seas, and prompted him to devote the greater part of his life to compiling detailed maps and charts still in use today. 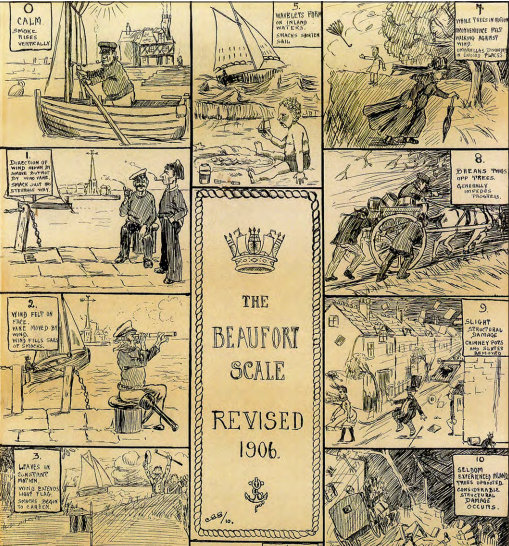 Yet again John Anthony Brennan , you have brought to life, another Irish man who does not get any iconic status .

Indeed there are many Irishmen and women who were never given their fair dues in their time. My aim with this series is to hopefully inspire the reader to learn more about them and their world changing ideas and inventions.

It seems I'm forever learning Irish names that have a mark on America. I'm wondering if Francis Beaufort has anything to do with the town of Beaufort, South Carolina? Thank you for this, Mr. Brennan. I'm enjoying your series!

We Irish continue to leave our mark on the world. Always with the intention of making it a better place.

I know the site likes to pride its self on historical accuracy but regretfully you have published a picture of the wrong Henry IV. Your picture is King Henry IV of England father of Henry V victor of Azincourt in 1415. You need Henry IV of France see below. Hes from the 16th Century and it was he that said 'Paris is well worth a Yes I forgot to add he had survived the St Bartholomew's Day Massacure, when most of the protestants in Paris and also many 1,000s thourghout France were murdered.

Thanks for the heads up Cameron. I will double check it.

You mention Azincourt in 1415. Did you mean Agincourt?

Wasn't it Henry iv that said "I want there to be no peasant in my realm so poor that he will not have a chicken in his pot every Sunday," Later adopted by President Hoover?

Two in one: Azincourt is the French version of Agincourt and is being increasingly used among historians here in UK. The 'chicken in every pot' was said by Henry IV of France. Its not the kind of remark Henry Bollingbrooke (Henry IV of England) would have used, he had userpted the throne from Richard II. It was this that would lead to the Wars of the Roses.

Yes, I knew it was French Henry that said it. So Azincourt and Agincourt are the same. Thanks for making me aware of that Cameron. Another reason to love this Wildgeese website as we learn so much here.