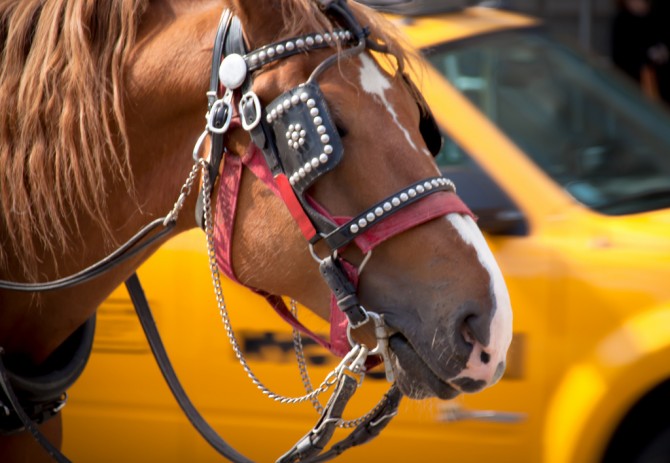 Yup, loony. If they can be "enslaved", then they also have an inherent right to the vote. It's that simple.

Permalink Reply by Virginia Purcell JImenez on March 9, 2014 at 7:53pm

Why the animosity?  Most people on this site do not want the horses to suffer at all.  Stating that Irishmen (in general) love and care about horses is a valid statement.  Are there idiots who happen to be Irish that don't?  Yes. Suggesting alternatives to what is currently in place is part of the discussion........ not something that should be shot down.  Suggesting that they hate horses because they don't want to give up having horses in Central Park is not valid either.  Figuring out a way to do this harmoniously is the reason for the discussion.

You sound as if you just don't want horses there at all?  Do you feel the same about police horses?  How about riding stables in general?  Maybe you just don't like horses?  Am I beginning to sound like you?  Cut out the cynicism and stop the diatribe.  Give your opinion and defend it but don't attack everything that's said.

Well said Virginia, Nobody is trying to "mistreat animals". I applaud your comments and I'm open to discussion on the real debate here in NYC.

The citizens of New York City voted for a mayor after he promised to end the abusive carriage horse trade.  These American citizens see the conditions these horses are forced to work in every day.  And they are sick of seeing the horses suffer.  So, Mr. Dulligan's cousin, owns one of these businesses?  Therefore, he comes here to use sentimental, romantic, but really financial reasons to continue this abuse.  Living in N.Y. I saw exhausted, battered horses struggling amid trucks, exhaust, buses, cars, horns, flashing lights, rain, snow, sleet.  It is no "walk in the park" for the horses.  The fresh coat of paint on the outside of the 3 story cement "stable" is to fool New York council members.  It does not fool the horses.  Take off your blinders!  N.Y. city residents don't want any more horses abused.  Marshalling the forces of the Irish diaspora to support the Northern Irish Carriage owner$ against the welfare of the horses, and the wishes citizens of N.Y. is foreign intervention.

I found your argument above a healthy one unlike the nasty attacking responses you had previous submitted.  Again though, I disagree with it.

It is difficult to believe that the mayor was voted into office just  because he promised to end the "abusive" carriage horse trade......during the campaign this was hardly mentioned.  He may have garnered some votes because of his stance but more than likely they were from his political cronies who are looking to make money off the property that is currently used for the carriage trade horses.  On the whole, the citizenry of the city go about their days rarely thinking of the horses and the other "touristy" aspects of the park.  I would even venture to say that the majority of the populace haven't even seen them at work.

A majority did vote in the mayor because of his views about "stop and search', education and his attitudes toward police, firefighters and the more day to day operation of safety and security within the city....choosing him over his opponent because the majority of  his policies agreed with theirs.  I don't believe that his election was in anyway a mandate to close down the stables.

What I have seen of the horses differs from yours.......I have never seen "exhausted, battered horses" walking through the park. I have been witness to them working in light snow and rain....but never in unreasonable conditions.  I have seen the difficulties manuvering through traffic around Columbus Circle /59th St. and the rude insensitive drivers {in the cars} hitting their horns and cutting off the path of the carriages to the park entrance.  This not the fault of the carriage drivers.  I would like to see the elimination of the necessity to enter onto the city streets......and that they be limited to stay within the park on the cart paths.

I agree that outside interests should not be marshalled in support or in protest to a city problem..  That is my feeling on all matters whether it be the carriage horses or neighborhood school issues.

The carriage horses in Central Park are obviously a contentious issue as shown in the responses. I have only ever left my hometown in Pietermaritzburg, South Africa once! I did so for three weeks in 1997, when our then 23 year old daughter au paired for a year in a small place called Cabin John, just outside Washington DC. At the end of my stay, we took a bus (never again), to New York, where we explored the city for three days. Although we did not ride in a carriage, we did see them regularly, and despite it being 16 years ago, they appeared unstressed and in good health. I firmly believe that horses are sentient beings, and the concept of them as a 'working animal' can be difficult to accept, but the pace at which they move could be described as 'a walk in the park'.

So, an African  kid on vacation thinks the horses "appeared unstressed".  Any other experts?  https://www.facebook.com/CarriageHorseCruelty

The vitriol in every response is remarkable, Gael.

Ryan, a personal thank you to for your moderating efforts at what amounted to a personal attack on myself, and the likes of which I have never before encountered on TWG. I do need to clarify a few facts, after which I shall exit this particular discussion permanently.

My daughter, at age 23, had already been awarded 3 University Degrees, and was, as I mentioned au pairing in the USA. The description of her as 'an African kid' is racist and degrading - I wrote the comment, as a 40 year old Psychologist with 5 University Degrees - two of which are Master's Degrees, in Psychology and Law respectively. I make mention of our respective levels of education in support of an innocent observation which I posted.

Heritage PartnerPermalink Reply by That's Just How It Was on November 20, 2014 at 8:50am

I do not know the history of your argument about racism. What I would like to say is that - in my role as a Social Worker in many different Departments in the Social Service sin England ; I found Racism to be endemic util I w as bold enough to challenge it .

You're doing it again............You lose all credibility when you go on the attack instead of just attempting to make your points.