finance.  He has been writing historical fiction for the past 10 years, starting with “Western Civilization,” a collection of short stories. He has gone on to write “Druids, Celts and Romans,” “The Last of the Fenians: Ireland 1910-1923,” “The Life and Times of Liam O’Donnell,” “Robert Kennedy Befriends Rory O’Donnell,” and “Unholy Conspiracies.” Smith grew up in Philadelphia's Incarnation Parish, and married a local gal, Elizabeth McGinty, in the city. He and his wife have two adult children, Joseph Connell Smith and Mary Eileen Barr.

TheWildGeese.com:  Jim, you've clearly got a lot of Irish interests. Tell us a bit about the genesis of them.

James Francis Smith:  I took an interest in reading; lately the Internet is my major source.  I look for stuff that others overlook.  For example, JFK on PT-59 [the future Irish-American president’s second command during World War II].

TheWildGeese.com:  Are you yourself of Irish ancestry?

Smith: My grandparents were from Cavan, Mayo, Sligo and Galway; my wife's parents are from Donegal and Skibbereen [County Cork].

TheWildGeese.com:  How did this ancestry come to shape your writing focuses, or not?

Smith:  My writing took form when I retired from Weyerhaeuser Co. and went into financial planning.  I wrote a book "The Path to a Successful Retirement." Writing became more interesting than selling stocks, so I meandered over to Irish history.

TheWildGeese.com:  Have you done any significant research into your family's Irish antecedents, their Irish experience, if you will?

Smith: Some -- I have an article from The Anglo-Celt, a Cavan paper, which states my grandfather Matthew Smith lived within 200 yards of where [U.S. Army commander] Phil Sheridan was born.  I can't get records from that time period, but my uncles claim their grandmother was a Sheridan. … I've been to Ireland 5 times.

TheWildGeese.com:  What's the date of the Anglo-Celt article, Jim?

Smith: 1928. It began with a girl from Cavan, who entered the Franciscans, then went on to my Aunt Kitty, who received her veil the same day, then they brought up my grandfather returning to the old homestead.

TheWildGeese.com:  So the focus of the article is about your Cavan family, then?

Smith: The Smiths of Cavan, upper Killenkere, Virginia. The focus of the article was about the nuns; my grandfather being in Ireland at the time was an add-on.

TheWildGeese.com:  Sort of a news story about local women entering the convent?

Smith: Yes, the Smiths were blacksmiths for the O’Neill’s in County Down, migrated during the plantation. The ones in Cavan anglicized their name to Smith; the ones who went down [Ireland's] west coast took Gowan or McGowan.

TheWildGeese.com:  What are the other three Irish surnames among your grandparents then? Perhaps some of our readers might be relatives.

Smith: Meehan from Sligo, Munnelly from Mayo and Keane from Galway.

TheWildGeese.com: So Jim, tell us about your muse. How do you go about a new project, for example, your current manuscript, "Irish Slaughtered Irish"? Where did the idea come from?

Smith: I begin by choosing my characters, I write in 3rd party limited [a writing convention that dictates that characters present that which they experience]. Among the characters are Phil Sheridan, Patrick Ronayne Cleburne, O'Kane and a number of Scots-Irish, like Jeb Stuart.  This enables me to cover all the [American Civil War’s] battles. I also included three characters from Skibbereen and a pair of Smiths from Cavan, fictional characters, of course. This enables me to put a human face onto history.

TheWildGeese.com:  So having populated the story, how do you go about creating the plot line? 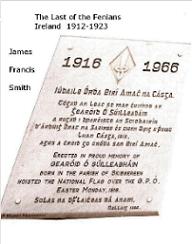 Smith: I begin with a book from [U.S. Military Academy] West Point to outline the battle, then [draw] from some 50 other books and the Internet to flesh it out. The fictional part comes from my imagination.

TheWildGeese.com:  All your books, to date, have Irish major characters. Have you determined why that is? Is this a conscious choice?

Smith: Since my retirement, I intended to highlight the Irish contributions.  My book "Druids, Celts, &amp; Romans" gave me the opportunity to tell about the contributions of the ancient Celts.  They brought iron and steel to Europe.

TheWildGeese.com: What have your Irish characters taught you about the Irish experience? What do they say to you, as they take life on your pages?

Smith: I try to be realistic. My books on the O’Donnell’s include all their good points and some of their bad traits …  WG