Wild garlic season is just finishing up in Ireland, and as a farewell to Erin's green shore it blossoms profusely in white flowerings throughout the land. Thanks to this wonderful plant I've eaten a lot of beautiful wild garlic pesto and wild garlic soup the last couple of months, as well as going on some lovely walks in the woods! On one of said walks, I made this music video for "The Wine Dark Sea," an extra track from the newest musical endeavour of mine "Hy Brasil, Songs of the Irish in Latin America." I've released the song as a pay as you please single on Bandcamp.

Wild garlic (creamh in Irish) has been known for its curative properties for millennia. In Ireland it was known particularly for the treatment of fevers. Creamh has illustrious and wildly expansive Indo-European roots. In Russian it is called ceremsa, krémuon in Greek, In old Irish it was crem and in middle Irish crim. It was used as a flavouring for butter in Gaelic times and every year there was a garlic festival. This part of the year was called Crimmess (Crim feis) meaning, literally, garlic festival. The word is found in place-names across the country, for example, Achadh Creamhchoille (Aghacramphill) in Fermanagh, Gleann Creamha (Glencrew) in Tyrone, and Inis Creamha on Loch Coirb in Galway. Wild garlic is associated with bitterness too, and the 17th century harper, Tadgh Rua Ó Conchuair, described a fellow musician's bad playing as like seirbhe an creamha "the bitterness of wild garlic." 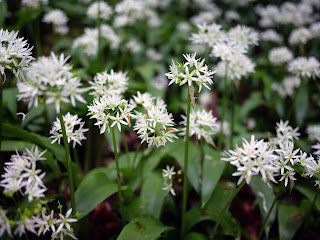 A fiery tempered blade in his talons

As claws fumbling with wild garlic

A terror ensnared on his tomb

Another interesting aside regarding garlic comes in what was called "Garlic Sunday." Garland's are associated with festivals in general in the English tradition, and according to the book "The Festival of Lughnasa" the English settlers in Ireland brought this term to Ireland, and the Irish in turn translated it to "Garlic Sunday." The Irish language festival on this day (the last Sunday of July) was Domhnach Crom Dubh. Cruiach Dubh (Crom Dubh) was the pre-Christian fertility God of Ireland who continued to be celebrated (often unbeknownst to the worshippers/merrymakers) until the modern era. In Lahinch in County Clare it was a religious festival and general mad melee until at least the 1920s. Loch Uachtar in Cavan also had a similar festival that died out too in the early 20th century. The book "The Festival of Lughnasa" says "the gathering there was very large and people came to it from long distances if the day was fine."

Garlic was found in Egyptian tombs dating from the 18th century B.C. and wild garlic adorns the lifestyle supplements of our daily papers in our own era each season, here is a recipe I made my own from one such publication. I read that wild garlic can be substituted or supplemented with nettle, another fine local ingredient to try out.

The Festival of Lughnasa

Thanks a mil Gerry, glad you enjoyed it!