It’s hard to believe that it’s now been 23 years since we participated in one of our most memorable St. Patrick’s Day celebrations. It was actually more a St. Patrick’s 'Week' celebration, which began with our participation in the parade in Dublin. This was part of a week-long tour of Ireland organized by the sadly defunct New York City-based Irish Brigade Association in March 1992. In the Wicklow Mountains the engine of our tour bus caught fire.

While we were there to celebrate all of the several hundred thousand Irish-born soldiers who fought in the US Civil War, our Cleburne’s Brigade Confederate reenactor friends, from Tennessee, also had a specific Irish-born figure they wanted to honor: Cork-born Patrick Cleburne, who attained the highest rank of any Irish-born officer in the war. He was killed at the Battle of Franklin in 1864.

We arrived at Dublin Airport on the 15th, and got more than a little attention from the customs folks when we informed them that the Confederate reenactors period-correct rifle cases did, indeed, contain rifles. Our paper work being in order, we were allowed to pass, but only after “the lads” from customs had some fun looking over the period weapons. Sagged though we may have been, we didn’t come to Ireland to sleep, except for perhaps Gerry, the tour organizer, who shortly after arriving collapsed on his hotel bed. Even Gerry's 70-year-old Dad held up better that afternoon.

So, after checking in to our hotel, it was off to St. Patrick’s Cathedral, a beautiful 13th century Anglican cathedral where Confederate reenactors had their flags blessed, then directly over to the Dáil Éireann. There we got a guided tour of the building, presented proclamations to government officials from our state governments in honor of the Irish who fought in our Civil War, and viewed the 69th New York’s Civil War regimental flag, which had been donated to the Irish people in 1963 by President Kennedy.

The following morning we were ready for the main event of our trip, the parade down O’Connell Street in Dublin. Irish weather in March is generally gray and damp, but St. Patrick’s Day in 1992 was sunny and warm. We had wondered if people in Ireland would understand whom we were portraying without an explanation, but it turned out that RTE had recently run Ken Burns' series on the war, and many people were quite well informed on America's Civil War.

With the Old Bethpage band playing period music behind us, our 69th New York and Cleburne’s Brigade color guard flags flying, two of our commanders atop Irish horses, the sun shining, and hundreds of thousands of Irish people cheering us up O’Connell Street in Dublin, right up to and beyond the GPO, it really can’t get much better than that for those of us involved with honoring our Irish heritage. And the lads of the Old Bethpage Village Brass Band won the first-place trophy for best small marching band in the parade.

The following day, after a tour of Dublin with Irish republican activist and historian Eamonn Mac Thomais, we headed south toward Waterford, where we were scheduled to have a dinner hosted by city officials at the Granville Hotel, childhood home of Irish Brigade commanding general Thomas Francis Meagher.


Some highlights from The Irish Brigade Association's 1992 tour of Ireland.

The trip would prove rather more eventful than we would have liked, however, as somewhere in the Wicklow Mountains the engine of our tour bus caught fire. Luckily we got everything off it before it burned to a charcoal-colored hulk. Our arrival in Waterford proved to be very late as a result, but the folks there graciously waited for us.

From there we traveled across to western Ireland, stopping in County Tipperary at Fethard, the birthplace of Fenian and 69th New York founder Michael Doheny. We also stopped at the Fenian monument at Ballyhurst. Firing a volley in honor of the Fenians there, with U.S. and Confederate flags flying, we may have scared a few of the locals. We finished that up quickly before the local Garda could show up.

In the next few days we hit some of the major tourist attractions of west-central Ireland: the Rock of Cashel; Cliffs of Moher, where the wind nearly sent Joe and the flag he was holding sailing over the countryside like a kite; the Burren; and Galway City. And the Cleburne’s Brigade reenactors made a side trip to County Cork one day to visit the boyhood home of Patrick Cleburne.

When the week was over we all headed home with memories of an incredible trip, memories certain to endure.

Postscript: Two years later, encouraged by meeting the family now living in Cleburne’s home, Bride Park cottage in Ovens Township, Cleburne’s Brigade would return for another tour of the island and place a plaque (below) on the wall of the home commemorating its history. 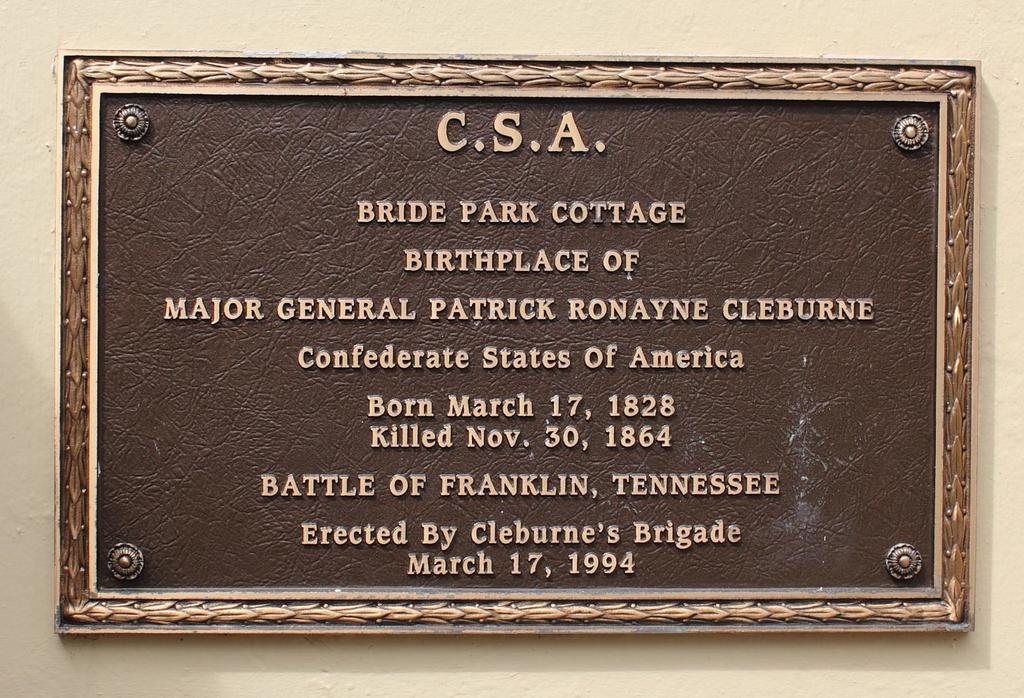 What wonderful memories!  Thanks for sharing.