See what the Emerald Isle has offer on foot. Walk along gigantic cliff faces, sandy dunes and beaches, historic ruins and buildings, breathtaking hills and mountains and see the captivating beauty of Ireland.  From half hour loop walks to week long trails, there’s something for everyone to enjoy.  We’ve rounded up our top five favourite routes located all around the country.

This trail spans out over 22 miles. The route is in place through permission of landowners. It is mostly off-road through fields which are usually grazed with sheep or cows.  Along the way you’ll be blown away by the Antrim coastline, the Giant’s Causeway, Rathlin Island, Dunluce Castle ruins and the spectacular views of Carnlough Beach. The trail begins at Glenarm Village and ends at Slemish.

4. The Glen of Aherlow

The Glen of Aherlow loop walks in Co Tipperary offer something for everyone. Choose from 8 stunning looped trails ranging from a half hour to four hours. Pass through low lyings hills, along stunning river banks to high level hikes through the GalteeMountains. Take in superb views of corrie lakes, wooded foothills, mountain streams and more and see the true beauty that Co Tipperary has to offer.

The captivating charm of the Sheep’s Head Peninsula is one of Ireland’s best kept secrets. Sheep’s Head is the narrowest of the peninsulas that extend from mainland of Ireland out into the Atlantic, between Bantry Bay and Dunmanus Bay. The Sheep’s Head Way is an 88km circular walking route beginning in the town of Bantry in Co Cork and running out along the north coast of the peninsula to the scenic lighthouse at the very tip before returning along the south side, passing through the beautiful villages of Kilcrohane, Ahakista and Durrus. As the peninsula is so narrow it means you are never far from the mesmorizing Atlantic Ocean. Along the way enjoy views of standing stones, stone circles, gigantic cliffs, a blow hole, churches and more.

The greenway follows the 42km trail of the renowned Westport to Achill railway line in Co Mayo which closed down back in 1937. Between passing from Westport to Achill you go through the very picturesque and quaint villages of Newport and Mulranny. The route also passes by some of the West of Ireland’s most dramatic mountains and offers magnificent views of Clew Bay and its many islands. This route has become extremely popular with walkers and cyclists and is the longest off-road trail in Ireland. With no traffic or cars to worry about you can truly enjoy and take in the beauty of the breathtaking surroundings the West of Ireland has to offer.

The Wicklow Way is a 129 km long-distance trail that crosses the Wicklow Mountains in Ireland. It runs from Marlay Park in the southern suburbs of Dublin through Co Wicklow and ends in the village of Clonegal in Co Carlow. It combines the beauty and tranquility of the Wicklow Mountains with the culture, history and heritage of Dublin city. En route the Wicklow Way passes mountain lakes, ruined buildings  and remains of the early Christian monastic settlement in the beautiful Glendalough valley. Due to its proximity to Dublin and the beauty of the walk itself it remains one of the most popular walking routes in Ireland.

This article was originally posted on TheIrishStore.com

I may have added the Blackwater Way. There are some beautiful vistas to be seen along it! 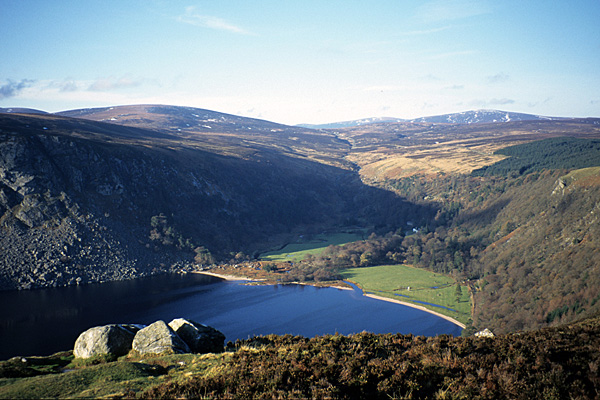 I love your top ten choices! There are so many beautiful walking trails across the whole of the isle. One of my favorites is the Cavan Way. It is like walking into a time machine of sorts. It runs from Dowra to Blacklion