By Gerald A. Regan Still, the Republic is peaceful, except . . . at moments when someone (either British secret service or Protestant Loyalist) has decided that the South should be reminded that the terrorist shouldn't have any sympathizers anywhere. Bloody Friday, May 17, 1974. Terrorist bombers turned the center of Dublin into a bloodbath. . . . I'll always remember that night distinctly as my first brush with death."

I studied Modern British and Irish history in Trinity College, Dublin, from October 1973 to June 1974, taking a year of study abroad before returning to Duke University to finish my bachelor's degree. During my nine months in Dublin, I spent as much time in wandering as I did in studying, taking delight in walking the city's time-worn streets. On May 17, 1974, a day I hazily remember as overcast, I spent some time in Trinity's Lecky Library, I suspect finishing up research papers. I can't recall if I had my bicycle with me that day, though I may well have since a citywide strike had shut down bus service. 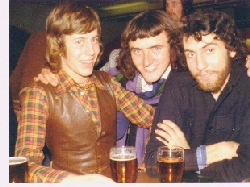 After emerging from the library, perhaps to head home to my digs in Glasnevin, I must have passed through the common and through the dark portal of the western gate about 5:20 p.m., and made my way up College Green, past the Bank of Ireland and its faded grandeur, and then up Westmoreland Street to O'Connell Bridge. I had crossed the bridge and entered Bachelor's Walk, heading toward the GPO, when I heard a boom behind me. I turned to see smoke emerging as if from Trinity, forming a distinct mushroom-shaped cloud, reminiscent, I thought immediately, of those given off by the nuclear explosions I'd seen in pictures, but much, much smaller. I thought, still oblivious to its portent, the cloud seemed remarkably similar to those.

The possibility of being injured or killed by a car bomb in Dublin hadn't occurred to me in my prior 7½ months in Dublin. I was aware of the ongoing conflict festering in the North. I was studying its roots with J.G. Simms, perhaps the last of Trinity's Dickensian professors, who lectured in front of their classes wearing black robes that I imagine have long since vanished from the TCD scene. I had, in virtually all my time in Ireland, a sense that I was living in an extended parish -- surrounded by friends (or, at least, harmless cranks) that, as the Bord Failte commercial stated, I had yet to meet. I felt this from my first extended view of the city in October, from the upper deck of the #19A bus (or was it the #11 bus, which also ran to city center from Glasnevin). I had no concern for my personal safety while traveling in Dublin, and in fact had walked back to my accommodations on St. Mobhi Road numerous times in the dusk and dark, times when I particularly felt at one with the city's brooding past.

As I pondered the cloud emerging from near Trinity, my attention was again drawn up O'Connell Street, toward the GPO, by the sight of people moving quickly down toward me. I initially thought these must be curiousity seekers, looking to see what happened near Trinity. But I quickly learned that there were explosions ahead of me as well. These people, I wager now, were fleeing city center in fear of additional bombs. That prospect never occurred to me, showing, I believe, how oblivious I was then.

I moved further up O'Connell Street, and I vaguely remember a crescendo of sirens and the sight of emergency vehicles speeding by. As I learned from an online chronology, the two bombs north of the Liffey – on Talbot Street and Parnell Street -- exploded at 5:27 p.m., and the South Leinster Street bomb, alongside Trinity, at 5:33 p.m. I do not believe I heard the first two car bombs explode, nor did I see any of the chaos they caused until after the South Leinster Street bomb detonated. By that time, I was crossing O'Connell Bridge. I'm not sure why I hadn't heard the earlier explosions. 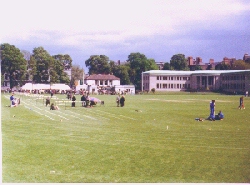 Trinity College's pastoral College Park on May 24, 1974, a week after one of three no-warning car bombs in Dublin killed or wounded more than a dozen bystanders a few dozen yards away, on Leinster Street (to the right, out of the camera's view).Photo by Gerald A. Regan

By the time of the bombings, I had already come to feel very much a Dubliner, as I daily walked or rode the city's streets, waited on its bus and movie queues, and drank in its pubs. That night back in my room in Glasnevin, it struck me: I had walked Talbot Street and Parnell Street and South Leinster Street. Lecky Library couldn't have been more than 200 meters from the Leinster Street bomb. Like in some perverse "Alice in Wonderland," the centuries-old Troubles had climbed out of my textbooks and nearly devoured me.

The next day I wrote in my diary :

We, the community of Dublin, my community, have been assaulted in a most vile and cowardly manner. To be forced to acquire the realization that an unseen enemy stalks your streets, ready to rain indiscriminate death and destruction in a flash on an unsuspecting populous means our lives in this city can never be what they were. We have lost 23 of our number (Editor's Note: 26 were to die in the three Dublin explosions), who died because they were were we

have had occasion to be in the past and could be tomorrow and only for God's grace weren't there yesterday. How can we ever be the same?

Gerald A. Regan (ger@thewildgeese.irish), a resident of Astoria, N.Y., is the editorial director of TheWildGeese.Irish and was a founding member of the New York-based Irish Brigade Association.

The experience of the bereaved and maimed of The Dublin and Monaghan Bombings by author and activist Don Mullan.

Interesting to hear your perspective as someone who was there, Gerry.  Thanks for that.

Go raibh maith agat, Ryan. Have you seen the monument in Dublin to those slain? The bombings remain unsolved, as far as I know.

Not sure, Gerry.  I may have passed the monument without even realising it.  I'll have to look it up next time I'm "within the pale."

You have 'the way with words' haven't you? Makes you interesting reading - thank you.

I live here though, that day, my friend's sister was close to the bomb, she came home 'dusted'.  My Dad, he used to travel a lot between England and Ireland and that time frame had a very negative affect on people who travelled the two places.

When I was in school, the sister of one of the Hunger Strikers who died was my teacher, we didn't know this until his death.

The things we don't know until the people involved in them are long gone.  It's sad.

Re The sister of the Hunger Striker, Jane: The Irish can be very good at keeping things in, even though they're emotions are roiling them.

In some ways Ger, those words you've just said might seem to make us all calculating BUT my mother died 4 years ago, this last year, I've met a man from another county, my Mam was his first girlfriend - my Mam, she was born in Belfast, her parents were from Tyrone and Donegal............he told me that my Granfather's pup was a right IRA place.  I know now that my Granny as an educated woman had a job teaching in a Protestant school, that she had a car, that shde helped breakouts from the prison

None of us Ger, not one of us even has one idea of what those Irish were capable of

In 1975 I was 10 years old and this incident was still fresh in everyone's minds. My mom was from Monaghan and my dad was from Donegal. Normally we would just cut through the north to Omagh then down to Strabane in Tyrone and back across the border into Donegal when we visited our families. But this time around I distinctly remembering asking my dad why we had to go the "long way" around and up the west coast through Leitrim / Roscommon / etc ? I can still see the look on his face and telling me " its too dangerous to go our normal way son". He was so scared something random would happen that he decided to go 3 hours out of the way to make sure we were safe. That would turn out to be my last time in Ireland with my parents as they both died of illness a few years later. Because of that this incident is a moment in my life I will never forget. Not to mention being kept away from my other family in Belfast for almost ten years. I wasn't "allowed" there because they were afraid something would happen to me being an "American" .. Thank you for this story Gerry