MÁIRT -- On September 13, 1803, John Barry (left), of Ballysampson, Co.Wexford, considered by many to be the 'Father of the U.S. Navy,' died in Philadelphia. At a young age, Barry went to sea as a fisherman; by age 20, he had a master's licensee. He emigrated to Philadelphia in 1760 and worked his way up to ownership of a merchant vessel. In 1775, he offered his services when the Continental Congress first formed the Navy. Given command of the sloop Lexington, Barry engaged and captured the British sloop Edward on April 7, 1776. It was the first capture of a British warship by a commissioned U.S. ship. Later, commanding the frigate Alliance, he would capture two more British ships, but he was severely wounded during those actions. After the war, Barry oversaw much of the building and improvement of the Navy and was promoted to commodore in 1794. Statues commemorate John Barry's life in his adopted home of Philadelphia and near his birthplace in County Wexford.

MÁIRT -- On September 13, 1836 John McCausland, Confederate General, and son of an Irish immigrant, was born in St. Louis, Missouri. McCausland grew up in the western part of Virginia and graduated from Virginia Military Institute in 1857. He taught there following graduation and served in the cadet detachment that was on guard during the hanging of John Brown. Though many people in western Virginia remained loyal to the Union when the Civil War began, McCausland did not. He recruited a Confederate regiment, the 36th Virginia, and commanded it as its first colonel.

McCausland and his regiment were transferred to Albert Johnston's western army in early 1862 and narrowly escaped capture at Fort Donelson. They were sent back to western Virginia later that year and fought there through 1863. In May 1864 McCausland was promoted to brigadier general and given a cavalry command. McCausland fought well through to the end of the war, but unfortunately, he is best remembered as the man who burned Chambersburg, PA under orders from General Jubal Early in July 1864. In April 1865 he had his cavalry brigade cut its way through the Federal lines rather than surrender, but he disbanded them several days later. Returning to the area where he grew up, now the state of West Virginia, McCausland would be dogged by the memory of his burning of Chambersburg for the rest of his life. He was even charged with it in PA later, but President Grant used his influence to have the charge dropped. McCausland would spend two years in Europe and Mexico to escape the problems associated with the Chambersburg incident. He later bought a large tract of land in Macon County, West Virginia, and lived there for over 60 years as a recluse. When he died on January 22, 1927, he was the next to last surviving Confederate general of the war. 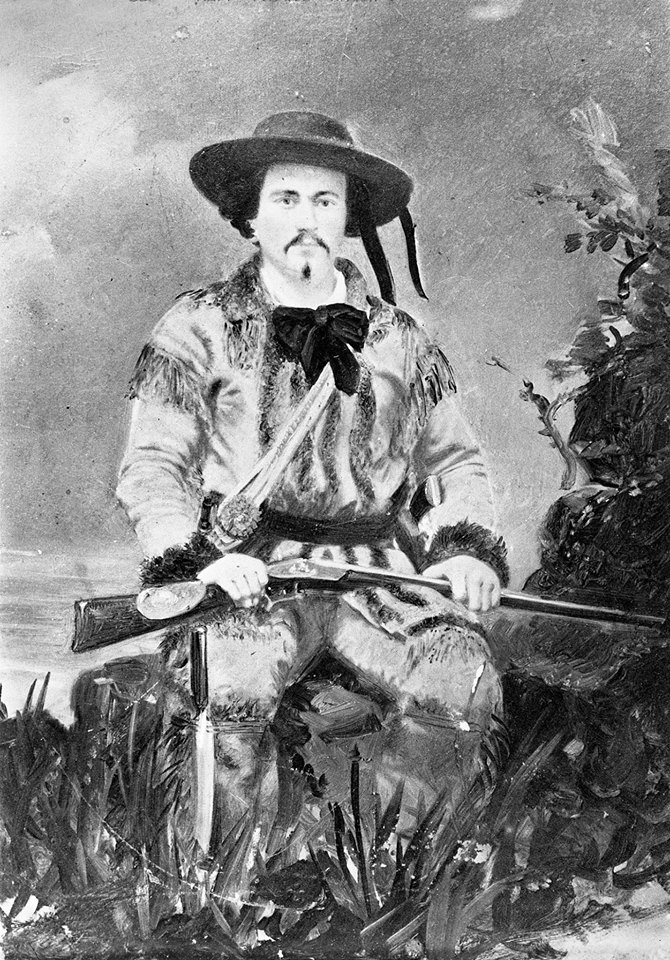 CÉADAOIN -- On September 14, 1908, Montana and Alaska pioneer John J. Healy (left) died in San Francisco. Many men and women with Irish roots participated in the “winning” of the West for the new nation that was growing into a world power in 19th century North America. Some are well known, but many are not. Among the latter is John J. Healy, of whom William Buck, publisher of the Benton (Montana) Record wrote in the late 19th century: “If a correct history of Montana is ever written … Mr. Healy will figure … as one of the most prominent and heroic characters of our early civilization.” Though John Healy made and lost a fortune a few times, he always seemed more motivated for a new adventure than the mere making of money. In his life he would be a soldier, gold prospector, trader, Indian fighter, law man, capitalist and more. He began that life by surviving An Gorta Mór, the Great Hunger, one of the greatest disasters to ever occur in his native country. John was born in in 1840 in Donoughmore, County Cork, one of the hardest-hit counties during those tragic years. In 1853 his family lost their grist mill business and immigrated to New York City. Though some Irish immigrants adapted well to city life, John was not among them. Tales of the beautiful open spaces of the American West may have been inspired him to move on. He would end up in Montana and have enough adventures there and later in Alaska for ten men before he died in San Francisco. 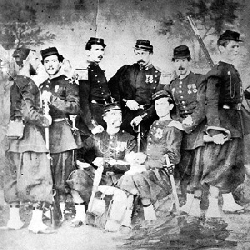 SATHAIRN -- On Sept. 17, 1860, units of the Irish Battalion of St. Patrick of the Papal army fought a Piedmontese army allied with Garibaldi

SATHAIRN -- On Sept. 17, 1862, the Irish Brigade of the Federal Army fought in one of the most famous battles of the American Civil War: Antietam. As Gen. George McClellan attempted to push back the Southern army of Robert E. Lee across the Potomac, the Irish Brigade and the rest of the 2nd Corps of the Army of the Potomac attacked near the center of Lee's line along the banks of Antietam Creek

horse was shot from under him -- the 69th New York would lose eight color bearers, the 63rd five. But the buck and ball ammunition in their smooth-bore muskets was also taking a toll on the enemy. Eventually, the position would be taken by the Federals, but at a terrible cost to the Irish Brigade. That sunken road is now known as "Bloody Lane." In October 1997, the Irish Cultural Foundation unveiled a monument commemorating the sacrifice of the Irish Brigade near the site of "Bloody Lane."

“No Sir, the thunder! If this ship cannot be fought without me, I will be brought on deck; to your duty, Sir.” -- John Barry to a junior officer while wounded below decks when it was suggested they surrender.