The Pope's Irish Battalion Part 1 of 3: A Call to Arms 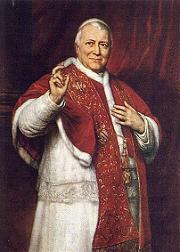 Up to the mid-19th century, Italy was a patchwork of small independent states, each influenced to a degree by neighboring superpowers such as France and Austria. A unification movement (Risorgimento) took hold in the 1850s, however, and included among its leaders, Giuseppe Garibaldi and Giuseppe Mazzini. Key to their aims was the annexation of the Papal States, a vast territory situated like a wide belt across the middle of the Italian peninsula. With no viable military force to protect his lands, an increasingly worried Pope Pius IX issued a call to Catholics throughout Europe for men and arms to raise an army in his defense.

By March 1860, Papal emissaries had arrived in Dublin to recruit an Irish battalion to serve the Pope. At the forefront of this effort was an alliance between Count Charles McDonnell of Vienna, a "chamberlain" to the Pope, and Alexander Martin Sullivan, the editor of The Nation newspaper. Within a matter of weeks, the resultant recruitment committee had organized rallies in support of the Pope throughout the country, and more than £80,000 was collected (equivalent to $9 million today), most of it channelled to the Vatican through the Irish Pontifical College in Rome. Sermons from the pulpits of parish churches also acted as conduits for the call to arms that emanated from St. Peter's Square.

Despite this, religion was not the sole motivation for the Irish. Their enthusiastic response was reinforced by the vocal anti-Papal elements with the British establishment. In a concerted effort to destabilize French and Austrian influence among the Italian states, Lord Palmerston's government openly supported the reunification movement, aiding Garibaldi's invasion of southern Italy with Britain's navy. Further, in response to the success of the Catholic Church's recruitment campaign in Ireland, the British authorities introduced legislation, The Foreign Enlistment Act, which prohibited British citizens from joining a foreign army. Not that this acted as a deterrent. Whatever Britain opposed, Irish nationalists were prone to support, as another common rallying cry of the day demonstrated "Mallacht Dé ar an mbanrion [God curse the Queen], It'll be the Pope for me."

These Papal volunteers came from all walks of life peasants, farmers, lawyers and doctors. Mr. J.A. Parker and Mr. Denis McSweeney from Cork, responsible for recruiting volunteers from the south of Ireland, wrote to Rome praising the 20 members of the Cork police force who resigned their posts and gave up good salaries to join the cause.

The opposition of the governing British authorities necessitated shrewd maneuvering by the estimated 1,400 Irishmen that journeyed to Italy. Many resorted to traveling in groups of 20 to 40, accompanied by priests and calling themselves pilgrims, emigrants or workmen.

By late June 1860, the majority of the Irish battalion had gathered in Italy to begin a rushed form of training in the company of volunteers from nine further nationalities. To make matters worse, English was not among the three different languages adopted by the Papal army. In command of the Irish unit, newly christened the Battalion of Saint Patrick, was County Louth native Major Myles O'Reilly.

In overall command of the entire Papal Army was General Louis Christophe Leon Juchault de Lamoricière, a Frenchman, considered one of the finest soldiers in Europe and recently returned from active service in Algeria with the French Foreign Legion.

Despite the quality of their commanders, the recently arrived Irish found the military organization of this hastily convened army to be shambolic. With no military source for arms and uniforms, the Irish were poorly clothed, worse than any other nationality in the Papal army. They were issued with surplus Austrian uniforms leftovers from previous wars and obsolete smooth-bore muskets. The green uniforms, promised months before in Ireland, never arrived, and this caused the most disappointment to the men as they had no badge identifying themselves as Irish. Furthermore, the Irishmen never served together and were split into companies, assigned to defend Papal land in separate key locations. While a few hundred disgruntled individuals returned to Dublin, the Irish fighting spirit came to the fore among the 1,000 or so who remained. General Lamoricière, who was quick to upbraid the slack units in his hodgepodge of an army, typically had praise for his Irish recruits.

Part 2 of 3: Engaging the Enemy