This Week in the History of the Irish: November 22-28

DOMHNAIGH -- On November 22, 1919, Máire Drumm (nee McAteer), (right) Republican activist, was born in Newry, County Armagh. Máire's family was strongly republican; her mother had been active in the War of Independence and the Civil War. When she moved to Dublin seeking employment in 1940 she joined Sinn Fein. Later, now living in Belfast, she became interested in camogie (the female form of hurling) and started a lifelong involvement with the sport in Ireland. Máire also became active in the republican movement in Belfast. While visiting republican prisoners there she met James Drumm whom she married in 1946. When the IRA renewed the armed struggle in the late 50s, James was again interned without trial from '57 to '61. When the civil rights movement began in the late 60s Máire was actively involved in the efforts to rehouse the thousands of nationalists forced from the homes by Unionist intimidation. Máire began to speak at many rallies and protest meetings and was elected to the Ard-Chomhairle of Sinn Fein. With her activities now high profile, Máire's family was targeted for government harassment. At one point her husband and son were interned by the government at the same time; James would become known as the most jailed republican in the six counties. Máire was also jailed twice for 'seditious speeches,' once along with her daughter. Her house was constantly being raided by security forces, and she and her family were under constant threat of death from the powerful forces aligned against the reunification of Ireland, but Máire would not be intimidated. Finally the constant strain took its toll; her health began to fail and she was admitted to Mater Hospital, Belfast. On Oct. 28, 1976, as Máire lay in her hospital bed, Unionist thugs walked in and shot the tireless freedom fighter to death.

," were publicly hanged in Manchester. On Sept. 18, they had helped rescue two prominent Fenians, Thomas Kelly and Timothy Deasy, as they were being transported from court to jail in a police van. The van was surrounded by some 30 Fenians and, in order to get the locked door open, one of them, probably Peter Rice, who later escaped to the United States, had fired a pistol into the lock. The shot entered the van and killed police Sgt. Charles Brett. Eventually the door was opened and the Fenians scattered. Kelly and Deasy avoided the massive dragnet that followed the escape and made their way to safety in America. Five Irishmen were arrested, the three who were later executed, and Edward O'Meagher Condon, all of whom were involved, and Thomas Maguire, who was not a Fenian and was nowhere near the rescue that day. Maguire's only 'crime,' like many Irishmen before and since, was being an Irishman in England. During the trial, one witness against the men had over 43 convictions for drunkenness and another avoided penal servitude by testifying against them, but it probably mattered little, for the convictions were certainly assured from the beginning. However, when given an opportunity to speak, the four Fenians on trial used that stage to shine a light on England's colonial oppression of their people. All five were condemned to death but Condon's sentence, perhaps because of U.S. citizenship, was commuted and eventually even the British government could not deny that Maguire was uninvolved and he was released. While in the dock, though, Condon uttered one of the most famous lines in Irish republican history: "I have nothing to regret or take back. I can only say, GOD SAVE IRELAND!" The London Times reported that the other three Fenians immediately shouted the same words. The "Manchester Martyrs" would later be immortalized by the song "God Save Ireland," which was the anthem of republicanism for 50 years. The executions of the three Fenians and Sullivan's song about it helped swell the ranks of Irish nationalism. The bodies of Larkin, O'Brien, and Allen were returned to Dublin, and over 60,000 people marched in their funeral procession. MÁIRT -- On November 24, 1922, during the Irish Civil War, Irish republican Erskine Childers was executed by the Free State government. Childers, whose mother was from County Clare, was born in London. He was wounded while serving in the British army during the Boer War, a war in which the Boer side was supported by most Irish nationalists. After the war, Childers became involved in the Irish nationalist movement; he also wrote a book about his exploits in the Boer War called In the Ranks of the CIV (City Imperial Volunteers). In 1914, Childers was involved in one of the most famous incidents of the republican struggle when he smuggled German rifles into Ireland on his yacht, Asgard. 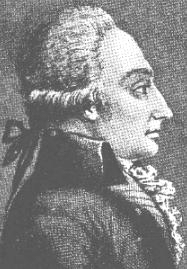 DEARDAOIN -- On the night of November 26, 1781, units of Dillon’s and Walshes regiments of the Irish Brigade of France were among a force of about 400 commanded by Marquis de Bouille that landed on the British-held West Indies island of St. Eustache (now known as Eustatius). De Bouille had more than 1,500 troops with him (about 600 were Irish), but with only 400 ashore since bad weather and high seas made landing the remainder impossible. Knowing that his small force had only the element of surprise in its favor, and not knowing when the weather might allow the rest of his troops to land, the Marquis decided to attack. He ordered Count Arthur Dillon and his Irishmen to march on the barracks with hopes of capturing the island’s governor there.

(Left: Count Arthur Dillon, from a contemporary portrait. His family served France for more than 100 years, but in 1794 he would die on a French guillotine.)

Meanwhile Chevalier de Fresne and Vicomte de Damas would attempt to rush the fort and enter it before the surprised English could close the gates. Dillon’s men managed to march straight toward the barracks without alarming the island’s inhabitants thanks to their red coats. They arrived at the barracks about 6 a.m., where part of the English garrison was on parade. They also thought the Irish were some other English unit, and the Irish gave no sign of hostile intent until the last minute. By then it was too late for the unsuspecting British soldiers. (Quite a number actually being Irishmen.) A point-blank volley and a bayonet charge by Dillon’s men and the fighting there was over. The governor, Lt. Col. Cockburne, rode up shortly afterward and was made a prisoner. The French force sent to assail the fort was also successful, managing to get into the fort before the drawbridge could be closed and overpowering the garrison there. St. Eustache was captured and over 850 British soldiers taken prisoner. Dillon later reported that 530 of the prisoners were Irishmen who immediately agreed to join the Irish Brigade regiments. A large sum of money was found in the governor’s house and de Bouille, in a gesture seldom seen in that era, distributed 100 crowns to each private soldier.

Over 150 Irishmen, woman and children were on the Queen, some for such heinous crimes as ‘stealing a black hat of silk,’ ‘stealing one silver tea spoon, of ‘taking a drab cloth coat.’ For such appalling crimes, these people were sentenced to ‘transportation for 7 years,’ which sentence might just as well be for life. There was little chance but a few of these people would ever see their beloved island of green again. Until the 1780s, many of England’s ‘criminals’ had been sent to the American Colonies; but the American Revolution had ended that. Over the next 80 odd years, thousands of Irish would arrive in Australia, some by choice, others would also be so-called ‘criminals.’ The ranks of the Irish in Australia would be swelled by revolutionaries from the United Irishmen, Young Ireland and Fenian movments -- often the best and brightest of Ireland’s youth. And just as they did in America, Australia’s Irish would get deeply involved in Australia’s political and labor movements, fighting to ensure that in their new land their children would never have to live under the same tyranny that ruled their homeland. (pic – auschain.jpg – An chain gang in ‘Van Dieman’s land.’ – National Library of Australia.)

‘Each soldier thus gained for France is worth 3 men to her; she has an enemy the less, a defender the more, and the blood of a citizen saved.’
-- Count Arthur Dillon discussing the value of Irish soldiers who often deserted from the English army to the Irish Brigade of France