Albert D.J. Cashier enlisted as a private in Company G, 95th Illinois Infantry in August 1862. Standing at 5 feet, 3 inches tall, he was considered a little on the short side, but the medical officer carried out the most minimal of physicals by only checking Cashier‘s feet! Thus began one of the most extraordinary stories of the Civil War, even though it didn‘t come to light until the early 20th century.

In the months after enlistment, Cashier and his comrades found themselves in Grand Junction, Tennessee, where the regiment became part of Gen. Ulysses S. Grant‘s Army of The Tennessee and took part in the Vicksburg, Meridian, and Red River campaigns, as well as actions at Brice‘s Cross Roads, Missouri, and the Battle of Nashville.

The Official Records don‘t indicate whether Pvt. Cashier performed any heroic deeds, but he was well regarded and liked by his fellow soldiers and being a good shot, he was usually detailed to skirmish duties. Being on the short side, Pvt. Cashier got out of heavy manual duties by doing extra laundry, sewing, and cooking for his comrades-in-arms, all at which he excelled, in return for them doing Cashier‘s heavy duties.

When the 95th mustered out in August 1865, Cashier returned to Illinois, moving from town to town, until finally settling in Saunemin, sometime in 1869. Living quietly there, Cashier applied for an army pension in 1899, a process which took eight years to complete, including a thorough medical, the results of which Cashier managed to convince not to reveal his secret and the pension was granted.

In 1911, Cashier was in the employ of a state senator and while cleaning some sticks from the driveway, the senator‘s car was reversed over Cashier. When the doctor arrived and checked the patient, he found that Cashier‘s leg was severely broken and that he was also a SHE! Pvt. Albert Cashier, veteran of the Civil War, was, in fact, a woman. Being now totally disabled, Cashier was hospitalized in the Illinois Soldiers and Sailors Home and with the help of the Home‘s Superintendent and medical orderly, Cashier‘s secret was kept quiet. While at the facility, Cashier took great pleasure in discussing the war with other patients and one of the greatest moments for her was when her former commanding officer visited. However, by 1914, Cashier‘s mental state was diminishing and she was placed in the care of the Illinois State Asylum, a placement that had to be done by court order. During the hearing, Cashier‘s true sex was revealed and the press made it public. Some of Illinois‘ state governors wanted Cashier tried for fraudulently claiming pension rites and others called her a hoax, but they reckoned that she had the support of her former comrades, all of whom vouched for her, and, soon, all talk of withdrawing her pension was dropped. 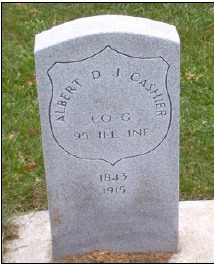 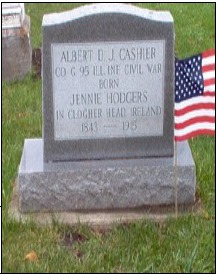 At the asylum, Cashier was forced to wear dresses, something which she hated and she began to withdraw into herself. One of the doctors treating Cashier gained her trust and over time, he eventually got her true story. Cashier revealed that she had been born, Jennie Hodgers, in Clogher Head, County Louth, Ireland, on or about Christmas Day 1843, and in her early teens had been sent to Belfast to care for an elderly relative. When this relative passed away, Jennie took a ship to America, working for a time in New York prior to making her way to Illinois. Very, very little is known about her life in the United States until Albert Cashier appeared on the muster rolls of the 95th Illinois Infantry.

Jennie Hodgers / Albert Cashier died in the asylum October 11, 1915, was buried, in full military uniform with full military honors by the Grand Army of the Republic (G.A.R.) in Saunemin's Sunny Slope Cemetery. Her original headstone read, "Albert D.J. Cashier, Co. G, 95th Illinois Infantry" but, in 1977, a larger monument was placed over her.

(This post is part of a week-long series I've titled, 'Their Stories, Our Heritage, Not Forgotten', in honor of Irish Heritage Week 2020.)