I’ve heard of life imitating art, but the only time I ever saw death imitating it was at Samuel John MacPherson’s wake down in Glut, a tiny village not far from Slievefada in north Donegal. (Note: Names of people and places have been changed to protect the guilty.) Every time I think about it the whole shocking episode brings two other wakes to mind, and they were fictional: the one in the tumultuous song Finnegan’s Wake – with an apostrophe – and the one in James Joyce’s bewildering novel Finnegan's Wake – without an apostrophe – which was inspired by the song.

There. I’ve already strayed away from my own scandalous story that I just sat down to tell you but seeing I’ve started straying I’m going to stay strayed for a while longer. Now there may be some among you who have never heard of the song Finnegan’s Wake. It’s about a hod-carrier called Tim Finnegan who was born with a weakness for the hard stuff. Anyway, poor Tim falls from a ladder while under the influence, breaks his skull and is pronounced dead at the scene. The mourners at his wake become a little too lively with the drink flowing and all, and somebody spills whiskey over Finnegan who is laid out on the bed. The smell and taste of the drink bring Tim to back to life and he ends up joining in the celebrations. So whiskey causes both Finnegan's death and his resurrection. (Maybe you should be reminded here that the word whiskey is derived from the Gaelic phrase uisce beatha, pronounced ˈiʃkʲə ˈbʲahə, meaning "water of life". So put that in your glass and drink it).

Now, to do justice to the ballad you really need to hear the air of it – and can I tell you here that the full musical score will be supplied by me on receipt of a case of Irish whiskey, preferably Jameson’s? If they’re out of Jameson’s, Jack Daniel’s will do just fine.

Tim Finnegan lived in Walkin Street, a gentle Irishman mighty odd.
He had a brogue both rich and sweet, and to rise in the world he carried a hod.
You see he'd a sort of a tippler’s way but the love for the liquor poor Tim was born,
And to help him on his way each day, he'd a drop of the craythur every morn.

Whack fol the dah now dance to yer partner, around the floor yer trotters shake.
Wasn't it the truth I told you? Lots of fun at Finnegan's Wake.

One morning Tim got rather full, his head felt heavy which made him shake –
Fell from a ladder and he broke his skull, and they carried him home his corpse to wake,
Rolled him up in a nice clean sheet, and laid him out upon the bed,
A bottle of whiskey at his feet and a barrel of porter at his head.

His friends assembled at the wake, and Mrs Finnegan called for lunch.
First she brought in tay and cake, then pipes, tobacco and whiskey punch.
Biddy O'Brien began to cry, "Such a nice clean corpse, did you ever see,
Tim avourneen, why did you die?" "Will ye houl’ your gob?" said Paddy McGee.

Then Maggie O'Connor took up the job. "Biddy," says she, "you're wrong, I'm sure."
Biddy gave her a belt in the gob and left her sprawling on the floor.
Then the war did soon engage, t'was woman to woman and man to man,
Shillelagh law was all the rage and a row and a ruction soon began.

Mickey Maloney ducked his head when a bucket of whiskey flew at him.
It missed, and falling on the bed, the liquor scattered over Tim.
Begod he revives, see how he rises, Timothy rising from the bed
Saying, "Whittle your whiskey around like blazes, thunderin' Jaysus, do ye think I'm dead?"

Whack fol the dah now dance to yer partner, around the floor yer trotters shake.
Wasn't it the truth I told you? Lots of fun at Finnegan's Wake. 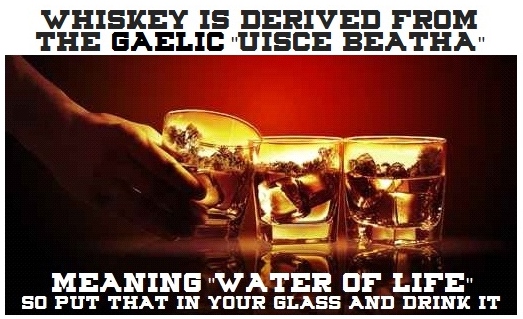 Where was I? Ah yes, Glut. Glut is the lovely little place I was telling you about, not far from my native Derry. But one of its number was Samuel John MacPherson, a second cousin of mine and easily the most unpleasant man I’ve ever had the misfortune to come across. Sam was as voracious and violent a drinker as you could imagine and nobody that I knew felt sorry for him even with the terrible handicap that had left him bent nearly double. And when he passed away in the blessed year of Our Lord nineteen hundred and ninety-five there wasn’t one that mourned his passing.

By way of illustrating Samuel John MacPherson’s unfortunate way with people I should tell you a story – possibly apocryphal – that’s still doing the rounds down in Glut. When Sam was informed by Doctor Leonard Phelps, a most gentle soul, that he had only a short time left on this earth, Sam glowered at him, thumped the desk and snarled “I want a second opinion.” Whereupon the doctor retorted “You want a second opinion? OK then. You’re ugly.”

The undertakers had a job on their hands getting Samuel John into the coffin. I’m told they tried to break his back – something that many a man would gladly have done during Sam’s life – but without success. Wee Michael Francis O’Halloran from up by Cullamore suggested they use a sledgehammer which he would supply himself but morticians Denis MacGillapatrick and Philip McOxenhauls gloomily declined wee Michael’s offer. The truth was of course that they were squeamish.

So what they did was to tie Samuel John down, winding thick ropes around his chest and legs and knotting them to the underside of the coffin where they had bored four holes. I only found this out afterwards so for most of the first hour of the wake I sat wondering how it was that the old bastard could be so horizontal.

The answer came shortly after the Rutherford twins arrived, each carrying a Mass card and a knife. The Mass cards were displayed sanctimoniously in their hands and the knives were hidden deep in their raincoat pockets. I should perhaps inform you here that Sam and the Rutherfords had history. After a fierce and fistful argument one night in the Keg O’ Poteen between Sam and the twins Sam had gone out and rustled two of their sheep and had them slaughtered and half eaten by the time the twins even discovered they were missing.

Ronald Rutherford was actually in the middle of intoning a hypocritical Hail Mary when I saw the glint of steel rising from his pocket. He leaned downwards towards Samuel John and drew a bottle of Glen Moray Single Malt Whisky from his other pocket, placing it roughly on the dead man’s chest (yo-ho-ho, and a bottle of Scotch) while the knife in his other hand gnawed stealthily at Sam’s bottom half. This of course was something you don’t often see at a wake and I was half way across the floor to try and put a stop to it when I heard foul-mouthed Sally Bawn McArthur behind me shouting “You’re a bit late Ronnie. The oul’ fart’s dead!” By the time I reached the coffin I could see that the other Rutherford, Billy by name, had got there before me and was hacking away at Samuel John’s top half.

“For God’s sake boys,” I hissed. “Have you lost your senses or what?” And with that the top and bottom halves of the dead man sprang up and Mass cards and strands of rope were flying everywhere. But even in my state of numbed shock I couldn’t help but notice that the only item in the casket that remained relatively undisturbed was the bottle of Glen Moray which had slid down Sam’s chest and now lay snugly between his hands.

If you enjoyed this piece and would like a free copy of my novel The Fabricator,
click here and I'll send it right over.

Hm. Belinda, I'm a person of greatly retiring disposition and must tell you that listening to that raucous rendering by the Irish Rovers caused me to spill three quarters of my double Jameson into the maw of a blootered bishop who just happened to be making a pastoral call on me at the very time I was clicking on that deadly arrow you supplied. The bish has since happily expired. The tippling point appears to have been that extra 2.5 ounces of Jameson's. So I hope that gnaws at your conscience.

And by the way, if your cunning plan was to have those cases of Jameson's and Jack Daniel's diverted to your address, think again. The musical score which I'm supplying is for an orchestral rendering of Finnegan's Wake, first performed by the Berlin Philharmonic under the influence of Tosser Barbel Pfannkuchen and is of the highest cultural quality.

Now I am wondering Colm Herron,If the dead man was such a monster in life... surely he was a monster in death !!! ... That leads to the question... why these people and yourself actually attended the funeral ??... Was it respect for your Ancestors -- of whom you both sprang.... or was it to ensure that the Oul B........... was really dead.......

My late husband went to his absent fathers funeral, just to ensure that he had been buried and could never hurt him again ...

Mary Mary quite contrary. You cast aspersions on my beloved cousin twice removed (once from the Keg O' Poteen and the other time from The Hungry Hen). You call him an oul' B when in fact he was middleaged. But he may well forgive you. He was the forgiving kind. Kind of.

We did indeed attend his wake and four of us were chosen by lot to shovel in the clay. Lovely feeling.

Your late husband made a good move attending his absent father's removal from this earth. It's as well to be sure about these things.

Thanks for making me smile!

how does yor garden grow ,

I agree. It's great Mary.

I remember when I was a little fellow attending a Wake with my parents, some of the men there were carrying on a conversations about the dearly departed. They were ageing that this fine fellow deserved to be buried at least 8 feet deep just to make it harder for him on judgment day. I guess he may have not been a "pillar of society" in our town.  Slainte .

Hardly worth the rascal's while clawing his way up on resurrection day then - handier to just head on down!