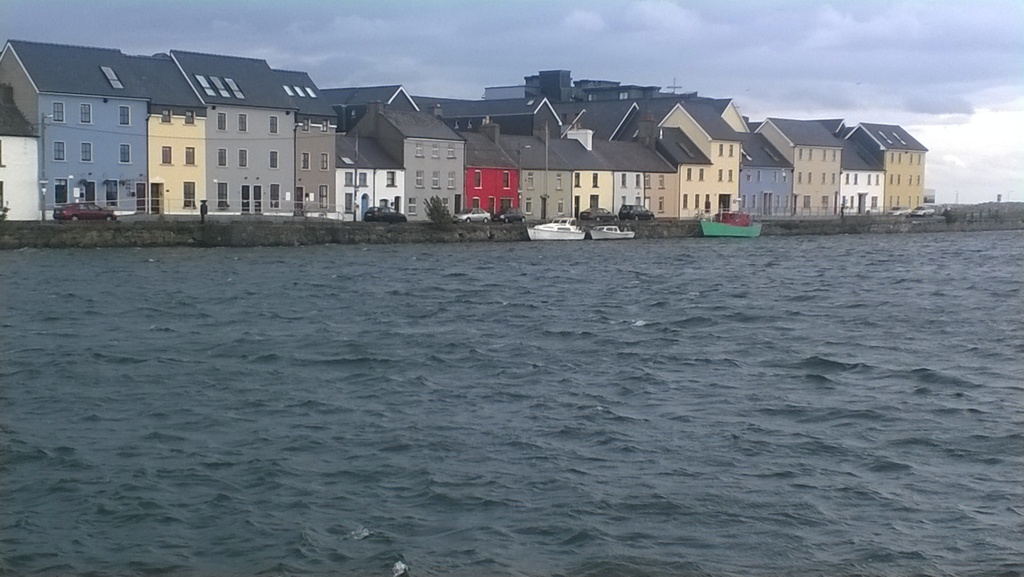 Even on the best of days, when the weather is temperate and the sky soft and cloudless, Galway City has a worn, secondhand feel to it: an historic, pensive, erudite quality everywhere you roam down its serpentine streets. But there’s also an energetic undercurrent to Galway that seems to thrive on the idea of opposites, which lends the atmosphere a certain air of unpredictability. In many ways, Galway seems like a lively college town, bordered on one side by the dark gray patina of Galway Cathedral, and the ever turbulent River Corrib on the other, which flows straight to Galway Bay on its way through the Claddagh. It’s an undefinable, mood-setting, soul-stirring town with a split personality; it is vividly animated by its youthful culture, yet deeply haunted by its storied past.

To Debra Wallace, who was born and reared in Letterfrack, 50 miles north in rural Connemara, Galway was the pinnacle of urban grandeur. At the age of 27, she’d blown into town carrying her dreams and her guitar to set up house in a two-story rental, on the edge of lower Galway’s Henry Street. She was an accomplished musician with a whisky-edged singing voice, and her dreams involved joining Galway’s vibrant music scene. The second I met her, I thought she embodied everything it meant to be Irish: She was big eyed, russet-haired, quick-witted, nobody’s fool, howlingly funny, and spiritually attuned. She gave our friendship no probation period when we first met at The Galway Music Centre, for there was nothing suspicious or cynical about her, though she was disarmingly shrewd. Upon learning that I am an American, she put her hand on her hip, narrowed her eyes to a slit, and give me the once over. Then she set her guitar case down and invited me to call out to her house for a cup of tea.

I had no idea what to expect as I made my way to Debra Wallace’s blue-painted door. It rose up from the sidewalk, sandwiched in a row of matching gray structures, each with a pitched roof emitting turf smoke that permeated the residential area in an aroma so redolent it made my eyes water. I rapped thrice on the door, and it swung wide immediately. Stepping onto the uneven cobbled brick floor, it took a minute for my eyes to adjust in the shadowy room, for it had only one window and it seemed the haphazardly arranged turf in the fireplace had reached its crescendo and now glowed in a burnt orange aftermath. The heat in the small room was stifling. I took off my raincoat and made to set it aside on the folded futon against the wall, just as I brought the four chairs before it into focus, where three figures looked up at me expectantly. Debra lowered herself onto the fourth chair and motioned for me to take the futon as a voice disrupted the damp air.

“Well, you weren’t telling a tale about that blonde hair of hers, God bless it; must have taken ages to grow,” the voice said.

“Claire, this is my mother; Da sits there, and this is my sister Breda,” Debra introduced, handing me a cup of tea.
“Nice to meet you,” I said. It was then I recognized where Debra had acquired her penchant for the once over, for all three Wallace’s studied me head to foot.

“You’re an American,” Mr. Wallace stated. He was short and stout and leaned forward in his chair, with his hands on his knees and his steady stare beaming beneath his tweed flat cap.

“Ah, Elvis and all that,” Mrs. Wallace said, who looked to be, in tandem with her husband, the second installment of a pair of square, blue-eyed bookends.

“That’s right,” I said, then I searched for a way to escape their scrutiny. I knew I could turn the tables if I could use the standard Irish conversational stand-by. “It looks like it’ll rain any minute,” I said, looking at Mr. Wallace.

“It does, yah. We brought the weather with us all the way from Letterfrack, so we did. If you haven’t been there, you should come see us. It’s God’s country up there; not much chance for the young ones to run the streets.”

“Speaking of streets, we should get going,” Breda said. “We’ve only come to town for the one day.”

We all stood simultaneously, making our farewells, and after Debra closed the door behind her family, she asked me if I wanted to accompany her to the epicenter of Galway City, which is an area known as Eyre Square.

“There’s a card reader up there, her name is Harriet,” she said. “As long as you’re one of us now, I think you should see her.”

“Don’t you have to make an appointment?” I asked.

“For what?” Debra said. “Don’t be so American. Let’s just walk up the road and call out.”

What could have been a 10-minute walk up Shop Street took 45 minutes, for such is the nature of Galway. There is no way to set out from point A to point B within the confines of scheduled time because there are too many people milling around, everybody knows everybody, and it is a crime against Irish society not to stop and chat to the point of exhaustion. I stood idly by as Debra engaged in Irish banter time and again, which is to say that each exchange felt like joining a running joke that had been going on for a while, and we had simply stumbled into its midst. It is a game of wit-topping one-upmanship, this business of Irish banter, and as we made our way to Eyre Square, I was starting to catch the rhythm.

Two heavy wooden doors led the way into the back of an atrium on the north side of Eyre Square. Debra heaved the doors apart and ushered me inside to where a canvas marquee had a chalkboard before it, which read, “Readings with Harriet: 12 euros.”

What happened next is another story.

But the thing about that day is that it was exemplary of the spirit of Galway, where anything can and does happen, on any given day. This wasn’t the first or last time I’d slid into the day thinking it would go one way only to discover it had segued into quite another. Because there’s an energy to Galway that will catch the unsuspecting unaware. It emanates from the dichotomy of its nature, its marriage of opposites, its union of past and present, and at its foundation are the fluid Irish people, who know a thing or two about embracing the flow.

Claire is the author of contemporary fiction set in Connemara, "Dancing to an Irish Reel"  Http://www.clairefullerton.com

Love Galway!  Been there 3 times and I find something new every time,

I love Galway and if I could, I would by a house on the street you have pictured above.  My favorite city in Ireland.  I look forward to hearing the card reader story, and figuring out where it is on my next visit!

I think this is one of the more popularly photographed areas in Galway. I've seen many similar shots taken from this exact same angle in the Claddagh.. And as for the card reader story, it's definitely coming! Thank you, Candy Gavin Aaron, for commenting.

I have only had the opportunity to visit Galway twice in my life. The first time I went was in 2007 and I was awed by it. When we made plans to come again this past August I made sure to plan a few days there again. I love Galway and if I was to move to Ireland that would be where I would want to settle. Thank you for the story, I look forward to more.

Splendid, Gavin. I appreciate you dropping a line. If it were me moving to Eire, I'd probably move just outside of Galway City as well. It's such an invigorating town. I've always been partial to Ireland's western coast. County Clare is also a favorite.

It is my pleasure. One of the things that I love the most is talking about Ireland. I grew up on a farm in rural Idaho. I am used to the little town atmosphere. I think that a little town in Ireland would be lovely, say Claddagh or somewhere else close to Galway. Thank you again for your articles. I can't wait to read more.

I'm familiar with Sun Valley, Idaho and the areas nearby. Great country, there. And I will now shamelessly point you in the direction of my 2nd novel, "Dancing to an Irish Reel," if you want to read more from me about Ireland, although I'm having a blast here on TWG, and will keep posting here until the cows come home.

I live in Idaho Falls and Sun Valley is about 2 hours west of us. I would love to read your books. Thank you for being shameless. :)

Claire, I will definitely look into your second novel, what is the title of your first?

Gavin, (Great name - my maiden name) there are some lovely towns not too far from Galway City Center.  I have family in Moycullen and Oughterard. Both places are just down the road from each other and a short drive into Galway City.  They have much to offer with a small town feel. Where all did you visit during your August trip?