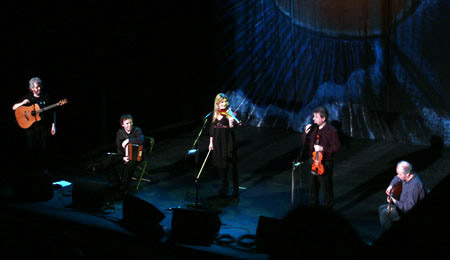 Carmel, California -- Before I get to the acclaimed Irish traditional musicians from Donegal who comprise the band, Altan, I’m going to editorialize to put the show I saw the other night into context. When I lived on the western coast of Ireland, it fascinated me to realize that in the local pubs, Irish traditional music was just something going on in the background, not intended to be a focal point. There’s a come-as-you-are feel to the pubs on the western coast of Ireland, as if a neighbor down the road had a reputation for always having an open door, should you be looking for a place to go when the urge hit to ramble.

In the dim pubs on the western coast of Ireland, there’s a laid-back mixture of ready camaraderie and space to unwind. Amber spirits flow freely and nobody’s watching in these gauzy safe havens where anything goes. Typically there’s burning turf somewhere in the room, and if someone shows up with an instrument, so much the better; it’s implied there’s a designated area for musicians tucked in the corner, away from the bar. Musicians can play to their hearts' content, and nobody will think anything of it -- odds are on any given night a few of their ilk came before, and the only common thread I could ever detect is that the musicians manifest well into the night.

It was my impression Irish traditional musicians show up without much of a plan. They take their sweet time settling into the corner, for the Irish are a chatty, unhurried lot, collectively unselfconscious and accommodating, so when it comes to the sessiuns, which erupt like spontaneous combustion from the corner, the locals simply scoot over, granting berth. Which isn’t to imply Irish traditional musicians are taken for granted by their compatriots -- it’s more like the Irish expect the presence of these seraphic spell-weavers, these tribal emblems that represent Irish heritage by channeling its ancestral soundtrack as if it were de rigueur. Many was the night I stood spell-bound by the quality of homegrown musicians, only to realize I was one of few paying attention. So to see the Irish ensemble Altan on stage here last week was to see what goes on customarily in an Irish pub under the glare of an unusual light.

I’ll now unapologetically generalize by saying when it comes to entertainment, Americans are used to instant gratification: an immediate wow factor, bright and showy and unambiguous because we’re an impatient lot that expects our entertainment up front and center. Knowing, as I did, that the nuances of Irish traditional music sneak up on a person with deceptive subtlety, I couldn’t help but wonder, as I sat in the audience waiting for Altan to take the stage, if the pending performance could possibly be translated into Americanese.

The five members of Altan strolled on stage without fanfare, beneath hazy gray lights in their low-key attire and simply picked up their instruments. There were no roaming lights, no flashing videos, no choreographed dancers, and it wasn’t until after the first tune that lead singer and co-founder, Mairéad Ní Mhaonaigh, finally whispered, “Hiya, we’re happy to be in Carmel.” I had the impression the group could have been anywhere and been comfortable, but of course I knew what many in the audience did not: the five members of Altan had brought their Irishness with them, and this solitary credential gave them card carrying license to fit into any corner of the universe, whether the audience knew it or not.

There seemed no appointed front person for Altan; the players took turns making introductions, telling stories, interrupting each other, making asides, and generally taking the mickey out of each other in that free-wheeling way the Irish often do when they’re trying to say they love each other. They brought the back corner of a Donegal pub to two 45-minute sets, which ebbed and flowed and weaved and dodged through reels, airs and jigs, blending one into the other. In between the sets, fiddler Ciaran Tourish casually announced the intermission by confessing the band always took a wee break. “Here’s what happens,” he began. “We take a break, which means it’s fair play for you to take a break, and what’d really be great is if we could all do it at the same time.” Nobody laughed harder than me at this indirect, underhanded witticism, so flawlessly spun in that classically Irish, self-effacing way.

It seemed to me that, after the intermission, the audience at Carmel’s Sunset Center had become acclimated to the tenor and rhythm of Altan’s show, for the air had been relieved of expectancy and a more settled-in aura embraced the theater as the players returned to the stage. But I’ve always known that the presence of anyone Irish tends to do this to an environment, which is the primary reason why I was so fascinated by the impact of Altan as a group on stage. It was more to me than their foot-tapping music as it navigated the tides of Irish expression through movements that shifted between exhilarating declarations and sonorous, elegiac laments. There was something so ruffled and homespun about the players, something so unselfconsciously salt of the earth, so loose in the saddle, so easy in the skin. I’ve always said when it comes to the Irish, they’re happy anywhere. They have a salient way of greeting humanity in a manner that lets you know they don’t take themselves too seriously, and the implied suggestion is neither should you. I think Irish traditional music is an expression of Irish character: It’s so complex as to be simple, so simple as to be complex, and somewhere within the crucible of Altan’s hour-and-a-half show, the members of the band brought more to the stage than their traditional music -- they showed the audience what it means to be born of Ireland, in their proud, confident, devil-may-care way of being in the world that was absolutely infectious.

After Altan’s encore, as the audience flowed out into the lobby, there was an all-encompassing, vibratory current of joy that led straight to an eight-foot-long banquet table, where Altan’s latest CD was being sold. It seemed to me the entire audience got in line, wanting to take the experience home with them, as did I. I wanted something representative of my Irish heritage, something haunting, ethereal, and evocative to remind me that the strains of Irish traditional music will always resonate deep within me. As I left Carmel’s Sunset Center, I was brimming with Irish pride from the effects of what I’d just witnessed. To see the band Altan was to understand that there are some musicians that are bearers of the cross and keepers of the flame of Irish heritage, who have perfected their art on behalf of all of us lucky enough to be of Irish descent.

Comment by Susan O'Dea Boland on April 11, 2016 at 5:17am
Claire Well done! You have truly captured an intriguing aspect of the Irish people in words here. Susan