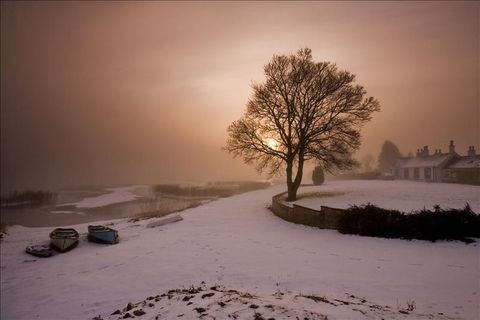 In the Northern Hemisphere, after Samhain, the Winter Solstice is the next important time of the calendar year, for a number of reasons. During the harsh winter months, the veil suspended between life and death is particularly thin. During these shrouded months, known as the ‘famine times,’ starvation was an ever present concern. After herding their cattle down from the higher slopes and guiding them through the pathway between bonfires in a cleansing ritual, the great slaughter took place. This ensured an abundance of food, a stockpile of hides and a saving on winter feed for the other animals. The wines and beers which had been fermenting since earlier in the year, were also now ready for consumption. Thus life would go on. Gatherings, led by the Master, and celebrated in dance and song, would take place in the sacred oak groves. There, in the soft, filtered moonlight thanks and praise would be offered to the deities for their bounty. At evenings end and just before dawn, an important ceremony would be held at Newgrange, the ancient passage tomb sited high on the eastern bank in the river valley of Bru na Boinne. Newgrange, built long before the pyramids in Egypt and erected in such a way that on the solstices, the sun's rays penetrate the light box above the entrance and fill the passageway and inner chamber with light. The ancients believed that the souls of the departed, represented by their ashes which had been placed in the innermost chamber, in stone urns, throughout the preceding year, were then taken by the retreating rays and transported to the afterlife. The pagan Scandinavian and Germanic people celebrate a twelve-day mid-winter holiday known as Yule. The word is part of the longer word “yuletide,” which is a day of worship, seen as the day that nature reawakens.

From the stone of Fal on Tara high,
'cross the river that flows deep and slow,
the ancients all gather at this holy place
to catch the bright morning's warm glow.

In robes of pure white, they walk the ground
and wait for the rising sun.
In the heart of the mound, old souls can be found;
heaven bound, they now become one.

The Master appears, an unearthly sight,
and raises his arms to the sky.
The people bow down, and kneel on the ground,
then chant with a joyful cry.

The rays creep across the hills and the glen,
and strike the box over the door.
They follow along to the chamber, and then,
the love there enshrined, proudly soars.

It has always been done in this very way,
and for eons will last evermore.
Their spirits will rise and fly every day,
and watch over our true heart's core.

From “The Journey: A Nomad Reflects.”

Having been there on a Solstice, this takes me winging back... go raibh mile maith agat, a chara