After fellow Wild Geese member Oisen O'Connell had generously taken me on my last Wexford tour via Ballyhack Castle, The Kennedy Homestead in Dunganstown, and the Dunbrody Famine Ship Irish Emigration Experience he said “just one more stop I think you will really like this one” and took me across the street.

Inside the 'The Ros Tapestry' was a small reception area where we purchased tickets and received the equipment for an audio tour. I had no idea whatsoever of what I was about to experience. As we stepped behind the curtain a dazzling display of 15, 6 x 4 ft, vibrantly embroidered tapestries lit up the dark corridors. From one display to the next we were taken on a historical journey of the Anglo-Norman arrival in Wexford and the founding of New Ross by William Marshal and Isabel de Clare. 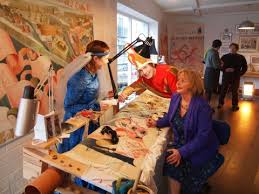 The tapestries were created by 15 volunteers while Ann Bernstorff researched and designed them. I have to say that this was a powerful experience for me. I had been blessed with the most amazing guides who took me to 2-3 places a day (which is why I am still processing my travels) but I had only general knowledge of where I was and the historical course of events eluded me.

Every panel of this Ros Tapestry Project brought this period of Irish history to life before my eyes. I also discovered why tapestries were so important in the middle ages and as I listened to the commentary, while taking in the scene, I felt an elevated form of understanding, aided I believe by the inclusion of the tactile element so missing in our modern world.

If traveling to Ireland for the first time, I highly recommend starting your journey with The Ros Tapestry as you will inevitably 'bump' into one historical location after another ... I wish I had!

Top Image: "Dermot MacMurrough, King of Leinster had his hopes fulfilled at last when, in May 1169, a small band of 30 knights, and 360 soldiers landed quietly on Bannow Strand, in the south of Wexford" Courtesy of 'The Ros Tapestry'

Interesting article.. I shared it with my 100 Million Irish United Ontario Canada page, thanks Alannah!

Thanks Fran they will appreciate that..a wonderful group of women.  When I told the receptionist, as we were leaving, what a powerful impact it had on me and that I was going to suggest on thewildgeese,com that people start their Ireland journeys with this exhibit tears welled up in her eyes and she said "that is what I always thought too"!  I cannot say enough about wg member Oisen O'Connell and his generosity and beautiful spirit.  As he saw how much I loved this, the third in my amazing New Ross experience, he bought me these beautiful coasters.  That was last September and has taken me until now to find a little cabin to rent, get some furniture and put out my coasters so here's a pic...it mostly holds my glass of wine! Great write up on the Tapestries! I am glad that you were able to experience them. So many people bypass New Ross & Wexford entirely... They miss a lot of history