(Left: a reenactor dressed as one of
O Neill's buannacht. Photo courtesy of Medieval Irish Heritage.)

In September 1600, the Irish forces of Hugh O'Neill, whom the English had made Earl of Tyrone, were in rebellion against Queen Elizabeth I. Two years earlier, O'Neill and his principal ally, "Red" Hugh O'Donnell, had routed an English army under Sir Henry Bagenal at Yellow Ford, expelling the English completely from the lands of O'Neill. Now Charles Blount, Lord Mountjoy, was marching on Tyrone with 3,000 foot and 300 horse, a sizable army for those times in Ireland. 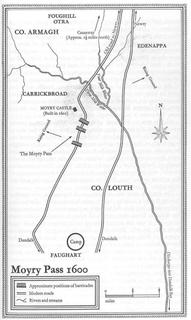 Irish armies of the Elizabethan era were usually made up of three principal types: gallowglass, kern and cavalrymen.

Gallowglass were warriors who had first come to Ireland from Scotland and the Western Isles around the 13th Century. They had family names such as MacDonnell, MacSweeny, MacCabe, MacDowell, and MacRory. They stayed in Ireland and mixed with the native population through the years but remained a warrior class, making up large parts of Irish armies until the Battle of Kinsale. By the end, their preferred weaponry, the axe, was obsolete but if the armies came into close combat they were still a force feared by the English.

Kerns were lighter armed infantry than the gallowglass, often carrying javelins, swords or bows. They were usually the most numerous in the Irish armies of this time. The cavalry were often "bonnaghts" a term derived from the Irish for "billeted men," because the local population of the Irish lord was required to furnish them with food and lodging. There were a limited number of Scotch mercenaries in the army of Hugh O'Donnell around the time of Moyry; they were often referred to as "Redshanks" for their practice of going barelegged.

But the reason Hugh O'Neill could fight the English on more even terms than earlier Irish armies had was his widespread introduction of the most modern weapon, firearms, into his army. Englishmen of the time reported the Irish were good shots, and Sir Walter Raleigh said the Irish had muskets "good ... as England hath."

Forty miles to the south of the ford of the Blackwater river lay Moyry Pass, the way to Dungannon, O'Neill headquarters in Tyrone. It had bogs which were impassable to the English army on either side and had been the scene of other military actions in the past; here O'Neill would try to stop the advance of Montjoy's army. Mountjoy was a formidable opponent for O'Neill and would eventually defeat him at Kinsale at the end of 1601, but this fight would be on ground of O'Neill's choosing.

On September 20, Mountjoy's army reached the hill of Faughart, half a mile south of Moyry pass, and the scene of Scotsman Edward Bruce's defeat and death in 1318. A small advance was sent out by the English and discovered that O'Neill's army was not only in the pass, but that they had built formidable works across it. They obviously meant to stand and fight, rather than

depend on their usual ambush tactics. Bad weather for much of the next ten days slowed the English preparations for attack, and only light skirmishing was done until October 2.

Finally on that day, the two armies came to serious blows. Mountjoy was at first successful, driving O'Neill's men from their first two lines of barricades. But Mountjoy could see that they would never force the third that day, and he would not divide his force to hold his gains, so the English retreated to where they had started.

The English suffered 160 casualties during the battle, many of them coming as the Irish harassed them during their retreat. They claimed that Irish casualties had been higher but, with the English being on the attack during the entire fight, that is unlikely.

Mountjoy had had enough of frontal assaults on the strong Irish defenses and next tried a flank attack. On the 5th, he sent 3 regiments of foot and 100 horse to try the right flank of the Irish defenses. They had to scale some high ground to get at the Irish line but did so and drove them back some distance before the Irish counterattacked and stopped their advance. All the English troops on the heights were soon back down. A simultaneous attack near the bottom of the heights had also failed.

The English had been in front of the pass for over two weeks now and were no closer to getting through it than they were on Sept. 20th. On the 9th Mountjoy retreated south to Dundalk. On the 11th, O'Neill abandoned the pass and moved north. No one is sure why he did so; he may have feared being caught in a trap when Mountjoy sent Sir Samuel Bagenal's regiment toward Carlingford, a position from which he might move to O'Neill's rear.

Mountjoy's men soon moved through the pass, getting a good look at the defensive works. One English captain said he never saw, "a more villianous piece of work, and an impossible thing for an army to pass without intolerable loss." Still, in spite of having gotten through the pass, Mountjoy found it was too late to mount an attack on O'Neill's stronghold in Tyrone. He built a fort at Mount Norris, between Newry and Armagh, and withdrew to Dundalk with the bulk of his army. O'Neill did not let him do so unscathed, however.

Attacking him with a small force near Carlingford Lough in the more usual ambushing manner of Irish armies, he inflicted serious casualties on Mountjoy again.

By holding Moyry pass in a stand-up fight and attacking Mountjoy again on his retreat, O'Neill had shown that the men of Ulster were still ready to resist all England had to bring against them, and he had retained full control of Tyrone for another year. But the end was on the horizon for The O'Neill, for "Red" Hugh, and the rest of the Earls. It was just over a year to the Battle of Kinsale, and disaster, and only seven years until "The Flight of the Earls." Mountjoy later built a fort above the pass. The remnants of that symbol of the ultimate English victory over O'Neill still stands.

I sent this to my brother, Hugh O'Neill.

Thank you, Patricia. Can we get Hugh to join us here?

I've sent your invitation to him, Gerry - but he follows his own path, like a true Hugh O'Neill! You'll have to wait & see if he responds.

Great piece. I have a personal interest here because the site of the Battle of Moyry Pass is just 10 minutes away from me. Additionally the site of the Battle of Ballinteskin which you refer to can be viewed from the hills, giving you the same viewpoint as O'Neill had. I have been given a version of the Moyry Battle where apparently, Mountjoy still had a section of archers in his army up to that time but they all fell there. Have you come across anything of that in your research?