[EDITOR'S NOTE: Many who have read Irish history are familiar with the name of John Mitchel (left), Irish revolutionary, Young Irelander, and publisher of The United Irishman, who was born 182 years ago, on Nov. 3, 1815; however, many are unaware of Mitchel's life in America. During the American Civil War, Mitchel supported the Confederacy. Three of his sons served in the Confederate army and two of them gave their lives in for that cause; one of them was named Willie.]

FROM WILLIE MITCHEL'S early days at university in Paris until that fateful July day by the Codori house on Gettysburg's bloody field, he and his tiny box of insects were apparently inseparable companions. His colleague and fellow infantryman, John Dooley, wrote fondly of Private Willie's relentless pursuit of the intricacies of the special mini-life of bugs, beetles, butterflies and bees. Bees Irish, Tasmanian. American. French. Southern. 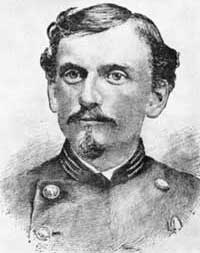 Drawn no doubt by the service of his two brothers -- one with Beauregard at Fort Sumter in the 1st South Carolina Artillery, the other in Virginia's illustrious 1st Infantry – Willie found irresistable the allure of active service in a cause that mirrored Ireland's own battle with its more powerful neighbor. Indeed, Willie's father, John Mitchel, himself was caught up in the Southern cause, but by war's end the old rebel and his beloved Jennie Mitchel would pay dearly for their commitment. Two sons would fall, one to lie forever in an unmarked grave somewhere by the Codori farmyard scarcely a hundred yards from the high water mark of the Confederacy; the other, Captain John C. Mitchel (right), would lie in Charleston's Magnolia Cemetery, the outline of the plot a miniature of the famous fort in the harbor.

Willie Mitchel and his father vacated Paris in the autumn of 1862, John to become an editor on the staffs of two Richmond newspapers, Willie to join the 1st Virginia where his older brother, James was serving. John Dooley (author of a diary later to be published as John Dooley, Confederate Soldier, edited by Joseph T. Durkin, SJ, Georgetown U. Press) soon took on the role of Private Mitchel's big brother, but the relationship came to a frightful end as Private Willie Mitchel received a mortal wound while carrying the flag of his regiment (one of several carriers on July 3, 1863) in Pickett's charge, just 200 yards from the Confederacy's High Water Mark.

Below, behind the wreaths at the famed "Stone Wall" at Gettysburg lies the sweep of the field traversed under intense rifle and cannon fire by Willie Mitchel and the rest of the Confederate divisions of Pickett and Trimble. WGT Photo / Gerry Regan

It could be argued that this obscure private bore the most recognizable Irish name on the field that day, simply because of his father's universal fame. In either army, the Mitchel name was known and revered by all of those who knew and respected John Mitchel's very best friend, the founder and, until recently, the commander of the Irish Brigade, Thomas Francis Meagher. And for good reason: John Mitchel and Meagher were Ireland's most famous rebels, Mitchel receiving 14 years of penal servitude just before the Rising of 1848 (the British law was created ex post facto, specifically to incarcerate John Mitchel), while Meagher would get the death sentence, later to be commuted to exile in Tasmania. With other Irish rebels, Mitchel and Meagher were expected to live out their lives there, among the aborigines and English settlers, on the vast prison island of the evil empire. Mitchel's family would later follow in the felon's track, but not for long. In 1853, after a well-executed escape plan (not unlike that of Meagher, who had escaped to America the year before) John Mitchel and little Willie, then only nine faced the perilous voyage north to San Francisco and freedom.

But little did either Mitchel envision the equally perilous and fateful months, less than a decade later, when America's sons would divide; the Mitchels and Meagher to play out their own version of America's civil war. But the ties between Mitchel and Meagher were never broken. An indication of the esteem in which Mitchel and his sons were held by the Irish of the Union army is illustrated by the action taken by the men of Meagher's brigade when they learned on July 4 that John Mitchel's son had perished in Pickett's charge -- which they had witnessed from a point on the Union line about 250 yards south of the famous "copse of trees" that was the focus of Pickett's Charge. Quite likely the sad intelligence came from Captain John Dooley, who was wounded and now a prisoner, and who had witnessed the fateful wound sustained by his friend, Willie.

As the Irish Brigade (now no longer commanded by Meagher) began the pursuit of Robert E. Lee, with the rest of the Union army, it left behind Quartermaster, Patrick M. Haverty, to find the body of Willie Mitchel, the Confederate volunteer. Haverty never found the body, though a naval surgeon dispatched from Washington for medical duty on the field, appears to have identified a hasty grave made for the young hero. Reportedly, some Confederate companions found the body and wrapped it in a blanket secured by three pins. To one of the pins was attached a simple note, "Private Mitchel, son of Irish patriot."

Does that box of insects keep company with the bones of Willie Mitchel? Might a summer butterfly flit across that burial ground? A bee in the Gettysburg glade below the Clump of Trees? What of Jennie, that Irish mother who lost two of her rebel sons (so touchingly drawn in our own day by Rebecca Moulder O'Conner, her Arizona-based biographer), making her way along the County Down strand as a wisp of Irish breeze carries a tiny voice. Of Willie?

REMEMBERING WILLIE: The green wreath in the picture's center (above) was placed during Remembrance Day, November 1992, at Gettysburg's Stone Wall by the Irish Brigade Assocation and re-enactors from the 1st Virginia Infantry. The ribbon reads "Erin's Warriors, A.N.V." (Lee's Army of Northern Virginia). WGT Photo 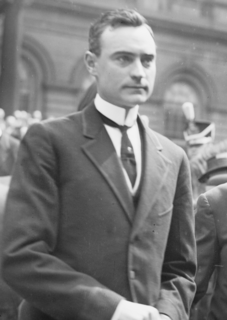 Jennie Mitchel was destined to survive all but Captain James Mitchel, the Mitchel's daughter lies in a Paris convent yard, a convert to the Roman church. James lost an arm for the lost cause and later settled in New York, where his son, John Purroy Mitchel (left), became Mayor of New York. John Mitchel was jailed by the Federal government for a time after the war, then returned to Ireland. In 1874 the old revolutionary was elected by the good people of Tipperary to be their Member of Parliament. When the British government declared him ineligible as a felon, Tipperary simply elected him again in 1875, but Mitchel boycotted all things English and refused to take his seat in London, preferring an Irish representative body. He died just days later and is buried in his parent's family plot in Newry, County Down.

Jennie, who was supported by exceptionally generous Irish-American admirers, lived on thru the century, passing away December 31, 1899. Her Celtic cross dominates a large family plot in Woodlawn Cemetery, Bronx, New York. Aside from her Confederate son, James, Jennie Mitchel is surrounded by other Confederate heroes: Generals Archibald Gracie, General Zachariah C. Deas, General Mansfield Lovell, and General Lloyd Tilghman. Nearby lies the body of the last commander of the Irish Brigade, Brigadier Denis F. Burke, who fought in every campaign of the brigade from the Peninsula to Gettysburg and Appomattox.

-- CAL
OTHER WGT ARTICLES ON THE IRISH AT GETTYSBURG

John Mitchel's legacy has suffered grievously in recent years with an increased understanding of his boosterism, not only for the Confederacy, but for the institution of slavery. See https://www.dailypress.com/news/dp-nw-hampton-fort-monroe-john-mitc...