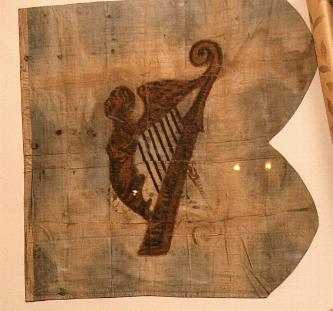 From 1702 to 1714, western Europe was engaged in a war involving, on the one side Spain and France, on the other a coalition of states headed by the Holy Roman Empire, and including Portugal, the Dutch Republic, England, Bavaria, Savoy and Denmark -- the so-called War of the Spanish Succession, waged in the Low Countries.

The French king was supported by a formidable Brigade of Irish infantry of outstanding skill and bravery, the Irish Brigade, led by Charles O´Brien, Viscount of Clare.

At the Battle of Ramillies (12 miles north of Namur in Belgium) on May 23, 1706, the French army was routed by the English and Dutch under the Duke of Marlborough.

Even as the French troops fled, the regiment of the Irish Brigade, led by Viscount Clare,  turned round and engaged with the oncoming victorious English, and succeeded in recovering their regimental flag, which the English soldiers had captured from them.  The rescued standard was later deposited for safekeeping in the convent of the Irish Benedictine nuns in Ypres, where it hung for many years in the choir as a proud reminder of the courage of the Irish soldiers.

Despite this tradition passed along by the Benedictine nuns within their community in Ypres, the flag’s exact provenance remains uncertain, with claims through the centuries that it represents one of two captured enemy standards, not the brigade’s regimental color.

Benedictine priest and historian Dom Patrick Nolan stated, in his book “The Irish Dames of Ypres” (Browne and Nolan, Dublin, 1908) that, at the Battle of Ramillies, Lord Clare’s soldiers captured “colours” from the enemy, and that these were brought to Ypres and hung up as trophies in the convent choir.  He quotes from contemporary sources that seem to show that as many as three flags were captured, one from a Scotch regiment in the Dutch service, one of an English regiment.  Nolan quotes an account of an Irish Captain Peter Drake, then fighting in a French regiment, who says of Clare’s regiment that they “not only saved their colours but gained a pair from the enemy.”

Below right, the flag of Lord Clare's regiment.

The episode is referred to in Thomas Davis´ patriotic song “Clare´s Dragoons.” whose ambiguous reference skirts the trophies’ original ownership.

The flags we conquered in that fray
Lie lone in Ypres´ choir they say. 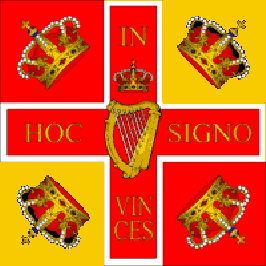 The song “The Flower of Finae,” also by Thomas Davis, tells of beautiful Eily, the flower of Finae, whose lover Fergus O´Farrell lost his life fighting fiercely in the Battle of Ramillies.  Eily, according to the song, left the world and entered the convent of the Irish nuns in Ypres, where she spent the rest of her life grieving and praying for her lost Fergus:

In the cloisters of Ypres a banner is swaying,
And by it a pale, weeping maiden is praying;
That flag´s the sole trophy of Ramillies´ fray;
The nun is poor Eily, the Flower of Finae.

In 1914, the Irish nuns left an artillery-shattered Ypres in order to return to Ireland,  ending an exile of over 200 years. They took with them the precious relic.  It had, however, suffered under the ravages of time, and only the middle part of the flag, depicting the Irish harp, has survived.

Throughout the tempestuous 18th century, the Irish regiments fighting in the service of France established a reputation as the most fierce, famed and formidable soldiers of all Europe. This reputation gained a compliment from King George II: "Cursed be the laws which deprive me of such subjects!" -- Sister Maire Hickey, OSB, and the Irish Benedictines’ Oral Tradition

Tomas, I urge you as time allows to put these thoughts together, along with this splendid though slightly underexposed action shot, in an article in WG, using your personal blog provided here. Then we are more likely to get them the attention they deserve.

Hi Joe, usually the flags are made of Silk, it is sized (primed) and then the image is painted on with oil paint. The silk deteriorates as does the color of the silk, what is left is a  very thin silk and paint skin. The paint also losses some of the pigment and becomes less vivid due to UV and age. It is exactly what you would expect to see. From the background of image it is evident it was blue the harp is yellow and probably defined with burnt umber. This would be a very delicate fragment, like the Dillon flag the horizontal or vertical threads of the weave may have rotted away completely and now become see through almost, the only thing stabilizing it being the paint. remember this is an organic item as is the paint and is susceptible to natures ravages. but also the image is of poor quality so it is difficult to know. Does anyone know where it is kept? Regards Tomás

The royal standard of England was, when it was hoisted on the Tower on the 1st of January 1801, thus heraldically described:—“Quarterly; first and fourth, gules, three lions passant gardant, in pale, or, for England; second, or, a lion rampant, gules, within a double tressure flory counter flory of the last, for Scotland; third, azure, a harp or, stringed argent, for Ireland.” The present standard connects in direct descent from the arms of the Conqueror. These were two leopards passant on a red field, and remained the same until the reign of Henry II., when lions were substituted for leopards, and a third added. The next change that took place was in the reign of Edward III. when the royal arms were for the first time quartered; fleurs-de-lis in the first and fourth quarters, and the three lions of England in the second and third.(from wikipedia)
Scotland's political union with England as the Kingdom of Great Britain came into force on 1 May 1707. The English and Scottish parliaments were replaced by a combined Parliament of Great Britain, The Battle of Ramillies fought on 23 May 1706, before the Union.  Does that explain the plain yellow field on the flag or was the Scottish lion rampant present?