Hoboken, N.J. -- Seventy-something Hoboken native John Carey, sporting a green sweater, stood amid the city’s annual Irish Festival and spoke of his youth -- having grown up with his parents and siblings in the Irish enclave of Riverdale's Gaelic Park -- and his Kenmare, County Kerry roots, where his mother was born and raised.

As John described the picturesque Kerry harbor-town, I wondered if he knew about Hoboken's connection to Kenmare. As chair and co-founder of the Hoboken Guards Hurling Club, New Jersey's lone Gaelic Athletic Association (GAA), I've relayed the same historical fact to locals and anyone who seemed to care, stemming from research done by my teammates during our founding in the fall of 2010: One of the first reported hurling matches in North America was played St. Patrick's Day, 1858. An inter-squad match by 30 lads from Kenmare took place "a stone’s throw from where we are standing here in Hoboken," I told John, handing him an O’Neill’s-crafted Hoboken Guards jersey. 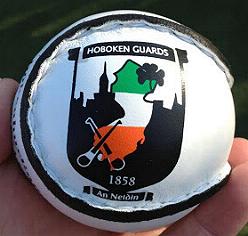 "You're kidding me," Carey said, surveying the polyester #15. All are crafted with "En Neidin" between the back shoulder blades, translated meaning Kenmare or "Little Nest." Fitting for a team from Hoboken, a town known as the Mile Square City because it is only 1 mile north to south, and slightly wider than its height.

"Yes. In Hoboken," I responded.

Men calling themselves the Kenmare Guards escaped famine starvation of the 1840s and 1850s, many from the Landsdowne Estate of Kenmare, immigrating to the New York City's Five Points region depicted in Martin Scorsese’s famed "Gangs of New York" film.

They were soon ferrying to Hoboken on weekends, typically Sundays, to play the ancient Irish field sport, the "Fastest on Grass", also known as the Clash of the Ash, because of its ash wood hurleys (sticks) which frequently do business against with the opposition while fighting for possession of the sliothar (ball). This is hurling, in case you do not know the skilled game.

Though no locals took up their challenge to face the Guards, the story reported, the Kenmare Guards played an inter- squad match against themselves on or near the same Elysian Fields which, 12 years earlier, were home to the first baseball game in American history. It took place some 26 years before the actual GAA was formed in Ireland, 50-plus years before the New York Gaelic Athletic Association’s Gaelic Park opened its gate for the first throw-in under official GAA rules.

Hoboken resident Alexis Walling, a speech-language pathologist, has not been to Ireland, and clings to the ambition to visit as one of her "dream trips," she says emphatically. One American-born festival attendee who has spent time in Ireland is Brooklyn resident Matthew Cain, who studied at the National University of Ireland in Galway. His undergraduate immersion into Irish culture, which included seeing his first live hurling match, was made possible through The College of the Holy Cross in Worcester, Mass.

Cain, 26, one of the co-founders of the Worcester Hurling Club, discovered the Hoboken Guards via their Facebook page. Enjoying a pint, fish and chips and a green shamrock cookie, he offered his take on the Guards, a 40-deep roster of mixed Irish and American-born members. "It's great to see and be part of this club," said Cain. "The best part of being a member is the camaraderie. Our players have hugely different backgrounds, coming together with a common goal and having a good time." (See mainbar "Hoboken Irish Fest Highlights NJ's Links to Emerald Isle.") WG