My father, Thomas Francis, was born in 1901. He lived his entire life on a farm situated in the townland of Muckinish West between Ballyvaughan and Bell Harbour in the Burren region of County Clare. He died in 1991. He left a copybook containing his memoirs. The following extract was written July, 1989. P.J. Francis.

Around the 20th of July approximately I went to the fair of Gort in Co. Galway. The leading fair was in the middle of March. Around this time as the Black and Tans lorries were passing the farm house of a man named Malachie Quinn at Kiltartan one of the Tans fired at Mrs. Quinn killing her. The murder caused much dismay among the people. Around this time after the shooting of two RIC men at a place called Castledaly, the Tans arrested two brothers named Loughnane. They inflicted a cruel and ghastly death on these men by tying them with ropes to one of the lorries. 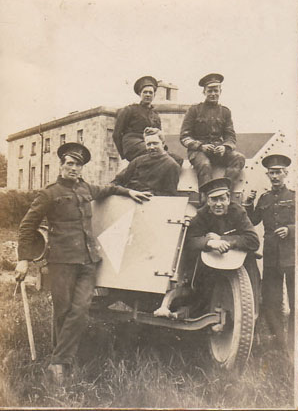 Such were the conditions prevailing about the same time when the British marines were stationed at the Coastguard Station (near Ballyvaughan, Co. Clare). It was their custom each day to go to the village for their supplies. There was six or eight each carrying a rifle as they marched up the street. They were met by a hail of gunfire mostly from the old post-office at the square. Two marines were shot dead. The others surrendered all their rifles and ammunition which were seized by the rebels who quickly left the village. The marines collected their dead comrades and carried them back to the coast guard station. Following the shooting there was the usual influx of Tans from Renmore and the usual consignment of auxiliaries who were an addition to the police force. There were several days of harassment; people were rounded up and harassed but to everyone’s surprise no harm was done. To give most of the marines their due they were not unduly aggressive even after two of their members were killed. (This ambush occurred on May 21, 1921 – P.J.F.)

I was at the fair of Kilfenora one evening and a lorry of Tans drove through the village rifles and machine-guns at the ready. There were a lot of people in the village as was the usual custom at all these notable gatherings. After passing through they turned the lorry and drove back through the village. They then drove back the same way they had come. There was no provocation from anybody. If there was I am sure the consequences would have been terrible.

The situation throughout the country was more disturbed. One day in the month of May 1921 we were shearing sheep when three or four lorries of Tans halted at the road. They had a full view of the field where we had the sheep flocked. They leveled their rifles at my two brothers and said to come on quickly. My father and some of my younger sisters were there. We got into one of the lorries. All drove off. They halted at Muckinish East where the road was blocked with stones. We were ordered to start clearing the rocks which were piled for about 100 yards of the road. The Tans and some of the police helped at the clearing of the rocks. They were in fairly conciliatory mood the same day. Having cleared the rocks to make way for the lorries to pass we were ordered into the lorries again and the convoy proceeded onto Corker Hill, Co Galway where the road was heavily blocked. The Tans and ourselves tackled the job. There were the usual threats and questions enquiring if we knew who were responsible for all the damage to the roads. Of course we denied any knowledge of who were responsible. One of the officers enquired of my elder brother if he knew who the people were. He knew but it was not likely that he would tell them. Their presence that day was due to one of the R.I.C. was retiring on pension and they were taking him to his native town of Gort.

Photos above and below are of Muckinish townland. How wonderful to have your father's original memoirs. This is a valuable account of his experiences. Thank you for sharing.

My Grand mother would often regale us grandchildren of how cruel the Blank and Tans were.. Pushing people out of their way with the guns , threatening people with shooting them , For what reason... they had the power that was invested in them by the British Government, who had sent these Tans to Ireland because they were surplus to requirement  after the war . They unleashed these undisciplined  Tans on the population of Ireland

Now then , I am in good company the , with our  respective Irish Grandmothers telling us the teals of yore ...

Of course, 30% of those Tans were Irish themselves, as the recruitment records show and as I recount in my book 'Running with Crows - The Life and Death of a Black and Tan'  - which recounts the story of the only 'Tan' hanged for murder during the Irish War of Independence, himself a Dubliner.