Ireland has introduced postal codes for the first time to increase the efficiency of the letter / parcel delivery system. As with other countries, the post office is suffering in the face of the Internet and private delivery services.

One of the downsides is the closure of post offices in villages throughout the country. Many people have no post office close enough to buy a stamp, collect their pension or just visit. Alternative means are in place not to the liking of many. Access to a computer is becoming more and more necessary for everyone.

It is not some nefarious plan by evil politicians, domineering officials and people up in Dublin. It is an attempt to maintain a service that is continually losing money. The taxpayers can only be expected to support it up to a certain point. When I was growing up, the postman delivered the mail on his high, black bicycle. (My first bicycle was a decommissioned postman’s model acquired with three pounds earned picking carrageen.) Postmen were going over to the ubiquitous Honda 50 motorcycle to do their job more efficiently and with less expenditure of energy. One postman on a Nifty Fifty could cover the area of several postmen on Hercules bicycles. As time went by, the Nifty Fifty was replaced by a green van that could carry more letters and parcels and was more efficient in warding off the extremes of the Irish climate. Householders installed letter boxes in their front door, which increased the efficiency of delivery. 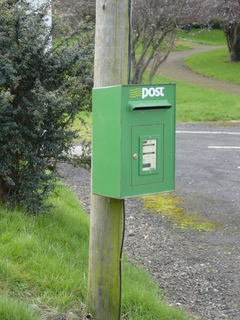 There was an unofficial social element to the post delivery system. For elderly people living in remote areas the postman may be their only contact with the outside world. He would check on their well-being, relay verbal messages and perhaps bring them a gat of Garryowen or a box of snuff. Few people had telephones. As the post delivery became more motorized and efficient, there was less time for visiting.

When I worked for a parcel delivery company in Ireland in the early '90s, we did not like delivering to private houses in the countryside. It invariably involved asking people for directions. You would be surprised how many people did not know who lived a few houses away. Few houses had names and none had numbers. With about 120 deliveries to make in a day, it took an inordinate amount of time to locate one rural address. There were a few houses that had regular deliveries, but they were the exception. Calling to the post office or stopping the postman was advisable. Cellphones have helped as the driver can call for directions if a contact number is provided. Some use a GPS devise. Eventually it will become mandatory for every house to have a number prominently displayed. That would also be a help to emergency services.

Like most things, my friend in Clare will eventually accept his new address. His business card will state “Galway” as his contact location. If he has to mail a package to his brother in the other side of the county, he will not even think about it when he writes “Limerick” as the address. However, I do not anticipate him changing his allegiance to the Galway hurling team.

Eircode, Ireland’s postcode system, was launched in July 2015. According to the Department of Communications, Energy and Natural Resources, more than 35% of addresses in Ireland share their address with at least one other property, making it difficult for those delivering goods and services to accurately identify the location of an address. (I would say that is a conservative estimate.) Eircode has been designed specifically to overcome this problem. Unlike other countries where postcodes define a cluster or group of addresses, a unique Eircode is assigned to each residential and business address.

An example of an Eircode is A65 F4E2. The A65 is the routing key and defines a principal post town span of delivery. The F4E2 is unique to an address and distinguishes one address from another.

The current address does not change and the Eircode is simply added to the end. The use of Eircode is not mandatory, the Department of Communications, Energy and Natural Resources points out. However, organizations will ask for it, especially those delivering goods or services.

If I ever find myself returning to the parcel delivery business in Ireland, I will be blissfully happy with the new Eircode system.

P.J Francis, sure tis only in Ireland that Postcodes can cause upheaval. and tis only in Ireland  that my soul belongs. I read your article with a smile on my face , just thinking about the people in the town where I originate from. It will be fuss and bother this new postal code, causing many a discussion in the town....

Sure tis myself that would love to be there, participating in this ' fuss and bother '