‘The Irish Pub’ Reviewed: The Perfect Pint and a Fabulous Film

What draws me back to Ireland over and over again?  There’s the stunning physical beauty.  But what makes a beautiful place so special?  For me, it’s the people: their intellect, passion, warmth and wit.  There’s no better place to find this than in an Irish pub and in the new film The Irish Pub directed by Alex Fegan.

Fegan’s film is an ode to traditional Irish pubs and the people who run these establishments that have often been in their families for generations.  The documentary film is now playing in theatres and at film festivals. A limited quantity of DVDs are available by request by sending an email to denis@atomfilms.ie.

It is difficult to fully appreciate or understand Ireland without experiencing pub culture.  Anyone who has spent any time in Ireland knows there is much more to a pub than a place in which to have a drink.  In some instances, the pub serves multiple purposes: grocery store, general store, hardware store, petrol station and, believe it or not, as undertaker. 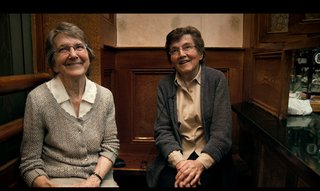 The film also explains the significant role played by snugs in traditional Irish pubs.  “These snugs in the olden times were used for ladies, to drink in, and as well as matchmaking,” says J. Curran publican in Dingle, County Kerry. “In every pub in Dingle, I’d say there are old marriage arrangements wrote down in every pub.”

Marriages weren’t the only arrangements made in snugs.  “Here, it’s always been an important place for horse trading,” according to the publican at McCarthys in Fethard, County Tipperary.

“People would love to come in and have a conversation about some serious matter and just close the little shutters off and have it,” says one of two sisters who own Brennan’s in Bundoran, County Donegal.

The Irish Pub takes you back to a time before radios, TVs, cell phones and social media; when friends, neighbors and even strangers created fellowship face to face and entertained themselves by telling stories, playing music or partaking in a bit of slagging, Ireland’s national pastime. In much of Ireland, the pub is still the “community living room,” a place to connect with family and friends, to find out what’s going on and to have a bit of craic.

“I like to come out and meet people and my neighbors and that and have a chat,” says a patron at O’Shea in Borris, County Carlow,  “I don’t come for the drink really, I’d have a drink but it’s for the chat I’d come.” 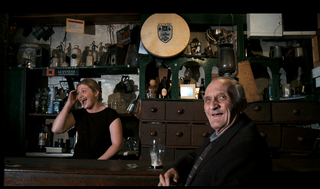 For an elderly gentleman who frequents E. Butterfield in Ballitore, Co. Kildare, the pub is his lifeline.  “Ah for only it I’d have nowhere to go because of my health, can’t get around much anywhere,” he says as he nurses a pint of Guinness.  “It’s terribly important to me because I’d come down here and have a chat a few nights a week and have a drink, and very important to me because I’m not interested in television.”  If it weren’t for the pub, he would be “sitting at home looking at the wall.”

“Your customer is your friend,” explains the Leonard’s Stores publican in Lahardane, County Mayo.  “Your customer is, he’s your family basically, and you get to know every one of them.”

The pub can also provide a welcome venue for traditional Irish music, and a place where generations mix and Irish culture and history are passed down from generation to generation.  It’s where intense debates take place.  Some topics, such as politics, religion and controversial local issues, deemed out of bounds in some settings, are more than fair game in a pub.  It is often a museum where history is honored and preserved.

“There’s a lot of stuff here that was collected over the years for the future generations to see what life was like,” says the M. Funican Bar owner in Ballylongford, County Kerry.  “It’s just the character and just a memory of the people who went before us just to keep the continuity.”

Director Fegan takes a minimalist approach to filmmaking.  There are no dramatic plot twists. The soundtrack is used sparingly, usually consisting of one or two instruments, mostly clarinet, evoking nostalgic longing.  In keeping with Fegan’s less-is-more style, the pubs are identified in captions by name and place, but none of the people are.  There isn’t any narration.  Instead, Fegan wisely lets the publicans and patrons do all the talking.

Except for a few shots of traditional Irish music seisiúns, there are few crowded bar scenes.  When the pub is packed, it’s filled with talented musicians, not rowdy drinkers. There is little noise.  Most scenes include one or two people, at most three or four, engaged in conversation or a song.  No neon lights, no bells and whistles.  After all, isn’t that what a good pub and drink are all about?

Make no mistake.  It’s not that the film lacks sophistication.  On the contrary, it is Fegan’s seemingly simplistic approach that makes The Irish Pub such a great piece of filmmaking.  It’s a lot harder to pull off than it looks.  Fegan has found good raw ingredients.  The publicans and patrons he interviewed are terrific storytellers.  The pubs are filled with historical memorabilia and lots of kitsch providing engaging visuals. Add to that fine editing and the result is an exquisite film that entertains while teaching us a thing or two about an institution that has long been an integral part of Irish society.

Fegan has crafted a lovely film that makes you laugh and reminds you why you love Ireland so much and want to return so often.

For more information about The Irish Pub, visit IrishPubFilm.com

Great article!  I want to get the film.