Herzog immediately called on Prime Minister Binyamin Netanyahu to move the peace process with the Palestinians forward.  In his victory speech, Herzog vowed to refocus the party’s agenda on diplomacy.  He said the Labor Party would offer a real alternative to Netanyahu and “challenge the government until we return to running the country.” Once a powerful political party, the center-left Labor Party’s influence has waned in recent years.

Herzog has an impressive political background.  He was elected to the Knesset in 2003 and has served in previous governments as minister of housing and construction, minister of tourism, minister of welfare and social services, minister of the Diaspora, society and fight against anti-Semitism.  He served as the top aide to former Prime Minister Ehud Barak.

He is affectionately known by his nickname “Boujie” which was given to him by his Egyptian-born, French-speaking mother who combined the French word for doll, “poupee,” with the Hebrew word of the same meaning, “buba.” 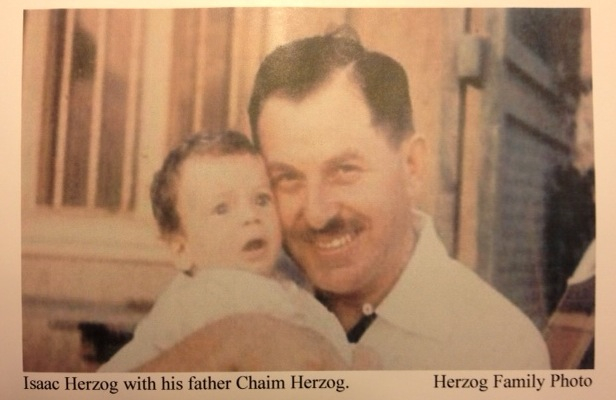 Herzog comes from a long line of leaders whose family tree’s root run deep in Ireland.  He was named for his grandfather, Rabbi Isaac Halevy Herzog who is considered one of the major rabbis of the 20th Century.  Born in Lomza, Poland, Rabbi Herzog received his first appointment as rabbi of Belfast, Ireland.  When he was offered the position of the first Chief Rabbi of Ireland, the family moved to Dublin.  He became a close friend and confidant of Eamon De Valera.  De Valera sought Rabbi Herzog’s advice while drafting the Constitution of the Irish Republic, which acknowledges a special place for the Catholic Church in Ireland, but also recognizes other religions including the Church of Ireland, the Presbyterian Church, the Quakers and Judiasm.  Rabbi Herzog served as Ireland’s Chief Rabbi unitl 1937 when he was asked to become the Chief Ashkenazi Rabbi of Palestine.  When Israel became won her independence in 1948, Rabbi Herzog, who had been the first Chieft Rabbi of Ireland, then became the first Chief Rabbi of Israel. 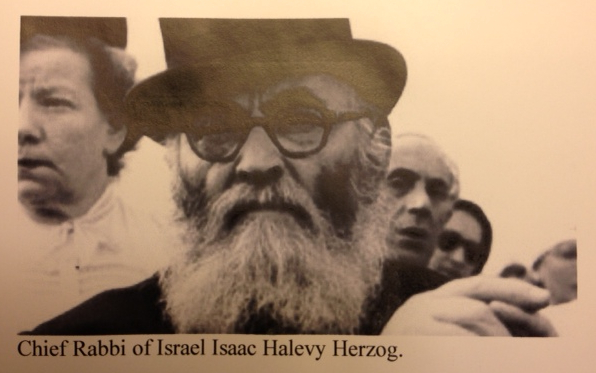 Rabbi Herzog had two sons, Chaim and Yaacov who were born in Dublin during the Civil War.  Yaacov became an Israeli diplomat.  Chaim became a General in the Israeli Army, a United Nations Ambassador and then President of Israel.

Chaim Herzog recounts his days in Dubin in his autobiography Living History:

“My first vivid memory in Dublin was of the Irish civil war.  The forces were set up on both sides of South Circular Road – we lived at No. 102 – and fought each other from the rooftops.  To this day I can recall the shooting.  I was only around three years old but already quite inquisitive and probably too mischievous.  As I wandered out into the front garden to watch a battle, a man driving a horse and cart went past and was shot dead in front of me.  The windows of Williams’s food shop, across from our house, were blown in.  I recall the horse wandering aimlessly, a dead man lying on the cart in a grotesque manner, and mounds of fruit from Williams’s windows cascading onto the street.  The opposing sides beat on the doors with their rifle butts in order to search the houses.  My mother, in hysterics, dragged me and my baby brother down to the cellar and locked us in a lavatory, while my father, who never knew fear, opened the door.

My father was an open partisan of the Irish cause.  When Irish prisoners went on hunger strike, he pleaded with them to cease endangering their lives.  In man circles in Ireland, our family name is still associated with those who fought for liberty.  The outstanding Jewish leader in the revolution was Robert Briscoe, later a member of the Irish Parliament (the Dail) and lord mayor of Dublin (his son, Ben Briscoe, also became lord mayor).  The Jewish community as a whole gave a lot of help to the Irish.  After the establishment of the Irish Free State, Eamon De Valera was in the Opposition, he would come to visit, usually with Robert Briscoe, and unburden his heart to my father.  He obviously never forgot these sessions, because in 1950, after the State of Israel was established, De Valera was one of the first foreign statesmen to visit.  He dined with Ben-Gorion and Bobby Briscoe at my parents’ home in Jerusalem” 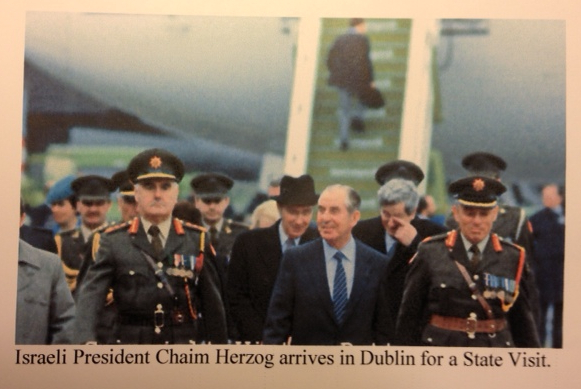 The Herzog Family and its role in Irish and Israel history is profiled in Shalom Ireland, (www.ShalomIreland.com) a documentary film I produced about Ireland’s remarkable, yet little known Jewish community.  In 2004, I was invited to present the film at the Jewish Film Festival in Jerusalem.  During my visit to Israel, I had the pleasure of meeting Isaac Herzog.  As he showed me around the Knesset (the Israeli Parliament), we discussed his hopes for peace in the Middle East.  I hope that with his ascension to Labor Party Leader, his dream will come true.

Thanks Valerie for this enlightening piece. Give us more on the Irish Jewish community. Perhaps by learning about the diversity of Irish society in the past, albeit quite small, Ireland can learn more tolerance for the many immigrant communities that have settled withing its borders in later years. A nation that welcomes the foreigner, is a country that will grow stronger because of their contributions. Thank you again.

Very informative, Valerie. My father was on the Republican side in the Civil War and knew Robert Briscoe. I believe they served time together in a "Free State" jail.