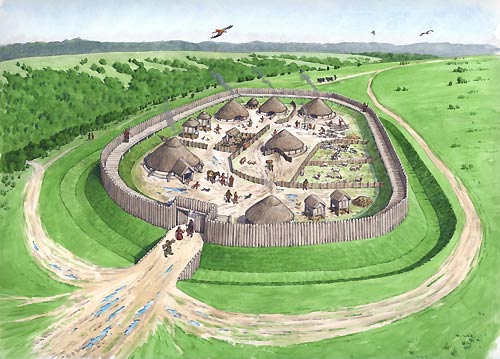 In the Great Hall, the attendees had begun to arrive and take their seats. King Laoghaire, already seated in his royal chair in the middle of the hall, was surrounded by his ten hand-picked individuals who attended him at all times and included a “high ranking Nobleman to be his companion; a Brehon judge to deliver and explain the laws of the country in the King's presence upon all occasions; an antiquary or historiographer to declare and preserve the genealogies, acts, and occurrences of the nobility and gentry from time to time as occasion required; a chief Druid or Magician to offer sacrifice, and presage good or bad omens, as his learning, skill, or knowledge would enable him; a Bard to praise or dispraise every one according to his good or bad actions; a physician to administer physic to the king and queen, and to the rest of the royal family; a musician to compose music, and sing pleasant sonnets in the King's presence and three Stewards to govern the King's House in all things.” The king of Munster sat in the chair facing south; the king of Leinster sat facing east; the king of Connaught sat facing west and the king of Ulster sat facing North. Their Nobles, Chieftains, Druids and attendants were seated behind their respective kings and the Ard Ollams had their own special seating area close to the east wall. At the time appointed, the master of ceremonies, the Seanchas, stood facing the king and at a given signal, declared the Feis to be in session. After delivering the welcome address, Laoghaire called for the Roll of Kings to be amended to include his name, rank and genealogy. The chief judge (brehon,) wearing the Iodhain morain (collar of truth) then declared the Roll to be legally binding and ordered it be entered in the annals for posterity. Next, the Royal physician was called upon and declared the king to be of sound mind and body and fit to rule. Each provincial king, in his turn, wearing the lodhain morain, was then called to give a detailed account of the affairs of his province including any disputes, criminal activity, infractions and outstanding eiric (tribute) not yet paid. Punishments including fines, forfeiture and banishment, set by the panel of judges, were imposed and made binding by royal decree. The amount of yearly eiric from all provinces, payable to the king, was decided upon and distribution of hostages finalized. The Ollamhs made careful and accurate note of all the events that transpired and inscribed them, word for word in the official records. The final issue not yet resolved was the matter concerning the troublemaker Patricius and king Laoghaire dispatched two of his stewards with orders to bring him before the court.

Sited between the Great hall and the mound of the hostages, sat the dwelling where Laoghaire’s wife Queen Angias, her children, attendants and servants were housed. Built in similar style to the other houses it was smaller than the Great hall but bigger by half than the other structures. With three doors and a large well fueled open hearth, it was warm, welcoming and comfortably furnished. Colorful banners and woollen wall hangings adorned the wooden walls and helped insulate the hall against the coming Autumn chill. A long trestle table was laid out in readiness for the expected visitor and when summoned, servants would bring platters of food, fresh baked bread, fruit, jugs of mead and honey and wine made from the berries of the elder tree. 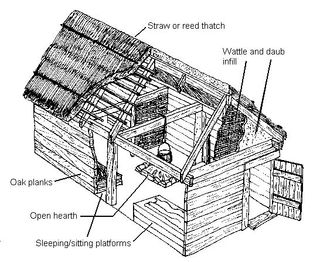 Queen Angias, seated between her two daughters and holding her son and heir Lughaidh on her knee, waited patiently for her guest to arrive. She was looking forward to the visit and remembered her daughters telling of their first meeting with the man called Patricius at the sacred site of Cruachain in the province of Connaught. Eithne and Fidelm had arrived home visibly excited and in awe of the teachings of the man. They told of how he had used the uisce (water) from the well to wash away their sins and how he had cast new powerful spells over their heads and how he had spoken to them of a wonderful place called paradise. Angias, aware that increasing numbers of people, including the kings of Connaught and Ulster, together with many Nobles and Chieftains, had already received Patricius and been baptized by him, knew that sweeping changes had begun. With wisdom, as befitted her lineage, she was sure that fundamental change was inevitable and while she understood her husband’s turmoil and had had many discussions with him on the matter, she had encouraged him to embrace the new ways.

“Could I have come to Ireland without thought of God, merely in my own interest? Who was it made me come? For here I am a prisoner of the Spirit so that I may not see any of my family. Can it be out of the kindness of my heart that I carry out such a labor of mercy on a people who once captured me when they wrecked my father's house and carried off his servants? For by descent I was a freeman, born of a Decurion father; yet I have sold this nobility of mine, I am not ashamed, nor do I regret that it might have meant some advantage to others. In short, I am a slave in Christ to this faraway people for the indescribable glory of everlasting life which is in Jesus Christ our Lord."

Patricius, from his letter to the Soldiers of Croticus.

In 403 AD, Patricius (Patrick) a young Roman boy of sixteen was taken hostage, together with his sisters Lupida and Darerca, by a raiding Celtic army led by the Irish warrior king Niall. Following a series of raids throughout Alba (Scotland) and Britain, Niall’s army, together with their hostages, crossed the English Channel and proceeded to Brittany in France where they fought with a tribe called the Morini. In France, Patricius became separated from his sisters and was brought to Ireland by the returning army. He was sold to a wealthy chieftain/druid named Milchu and traveled north to the province of Ulster where he became a sheep-herder on the slopes of Slemish, an extinct volcanic mountain in County Antrim. By his own account, for six years he lived a lonely life and wrote about his experiences later, in two letters that have survived. After his years in captivity, he managed to escape and traveled across country to Killala bay, County Mayo where he boarded a ship bound for Britain and eventually re-united with his family. 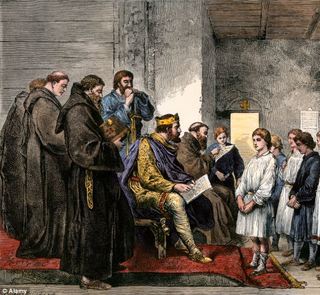 Patricius was born in Nemptor (Dumbarton) a citizen of the Roman Empire in 387 AD. His father Calpornius, was a deacon, his mother was a sister of Martin of Tours in France and his grandfather Potitus, a priest. Religion was in his blood and soon after his return to his family, he was sent to Auxerre, France to study religion and theology. It is known that he spent several years at Marmoutier Abbey in Tours, France and was eventually ordained as a bishop by Germanus of Auxerre at Lérins Abbey. At his own request, Patricius was sent to Ireland in approximately 430 AD shortly after his appointment as a missionary, by Pope Celestine. Christianity, it is widely believed, had already taken a foothold in Ireland long before Patricius arrived. A tribe named the Attacotti are believed to have settled in the province of Leinster after arriving from Roman Gaul where, it is thought that they may have served in the Roman military in the mid-to-late 300s. They would have been exposed to early Christianity which was already making inroads in that region of France. A monk called Ciaran (the elder) had preached it in the late 4th Century AD and was the first bishop of Ossory (Kilkenny.) Pope Celestine, had sent a Bishop named Palladius to Ireland to minister to any that were already Christianized by that time, and had some success. Patricius, when he arrived, would have had many contacts already Christianized from which he could draw on for support. Coupled with the financial backing of the wealthy church of Rome, all made it unlikely that he would fail in his mission. 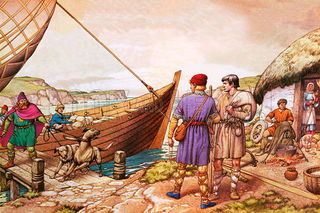 After several years of missionary work among the Morini people in France, Patricius eventually set sail for Ireland. Failing to land in County Wicklow, due to the hostility of the local population, Patricius and his followers sailed up the east coast and landed at a small island off the coast of Skerries, Dublin. After a short respite, they continued to sail north and landed safely at the mouth of Strangford Lough, near to the modern-day town of Downpatrick. A local Chieftain named Dichu gave him a small piece of land in the townland of Saul, near Strangford Lough in County Down on which Patricius built his first shrine and started his mission ...

From "Out of the Ice: Ireland Past and Present."
By Author/Poet John A. Brennan.

As always  you have a way of jumping out at me with your writings, and I find that I always have to read them... So I have  done some digging about  Palladus , who was sent to Ireland By Pope Celestine 430 AD.. .. Wanting to understand why  St Patrick has been credited with bringing Christianity to Ireland ..  Here's  what I found and would like to what you think on it..

The  Irish  annals for the fifth century date Patrick's arrival in Ireland at 432, but they were compiled in the mid 6th century at the earliest. The date 432 was probably chosen to minimise the contribution of Palladius, who was known to have been sent to Ireland in 431, and maximise that of Patrick

Palladius was banished by the King of Leinster and that's how Patrick took over.

He served as a bishop in Scotland for 20 years.