Those immortal words were uttered by my father, Mal, as he waved his hands around proudly, upon completion of a task so simple a four year old could accomplish it equally well. The comment was directed toward wee George, as both men stood in the garden at the side of our house, one summer afternoon. George, a neighbor, lived with his brother Paddy and his wife, just around the corner from us. He did not get along with his sister-in-law, and because of this, spent a lot of time at our house at 43 Rathview Park and also at my Uncle Joes in number 18. He had little or no formal education, but was an expert in the art of repartee. Sarcasm was his stock in trade and if annoyed would often snap back at anyone he felt was being a smart-alec. George was small in stature, around five feet tall, but had a large heart. His crinkled face, weathered by many hours spent scouring the countryside for eggs and many more hours riding shotgun on my grandfather Jacks’ horse and cart as he accompanied him on his fowl gathering excursions north and south of the border, usually bore a beaming smile, but not today. Today was different...

George always wore a flat, peaked cap rain or shine, and would spin it around on his head, with the peak facing backwards, any time he was involved in manual labor, or if someone made him angry. He and my father had spent the morning in the garden, digging and weeding between the rows of carrots and cabbages. It being a hot day, and because he had had a run in with Sarann, his brother’s wife, that morning, George was not his usual, genial, good natured self.  Earlier, he had taken off his old, threadbare jacket and draped it over the fence, but kept the vest on, then rolled up the sleeves of his once white shirt, in preparation for the day’s labor ahead.  He rarely took the vest off, except when he took a bath, and that was an even rarer event. In the right hand pocket he kept a large, round faced fob watch attached to a long silver chain. He regularly wound the watch, and although he couldn't tell time, it always had pride of place in the vest pocket. If anyone asked him what time it was, he would proudly take the watch out and hold it so the enquirer could read the time for him or herself.

“There’s the time right there,” he would announce and slip the watch back into the pocket. 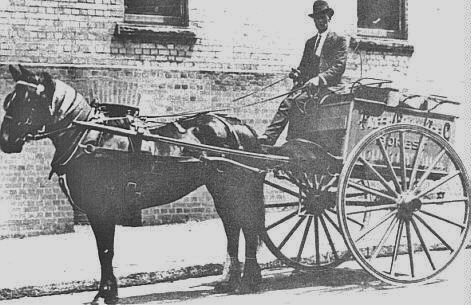 George received a small pension every week and after paying for his keep would buy whatever necessities he needed. He always bought a large bag of assorted sweets which he would distribute among his faithful following of children. He didn't place much value on money and was content with just enough to live on. Once, he was asked, jokingly,
"George, what will you do with all your money when you kick the bucket?"
George, unhesitatingly answered,
"I don't know about that, but I’ll tell you this, there are no pockets in a shroud."

When they were finished with the weeding, both men moved to the shade of the back yard, where the pleasure of a cold drink awaited them. My father had sent me up to James Murtagh’s earlier for a large bottle of shandy, a mixture of lemonade and beer, and I ran inside to get it.
"Eh. Georgie, who will I leave them to?" repeated my father, doing his impersonation of the Cassius Clay shuffle, dancing around waving his hands again, under George's nose.

“Float like a butterfly, sting like a bee,” sang my father, skipping and shuffling in circles around George,  every so often he'd lunge forward and like a boxer going in for the kill, slap the peak of Georges’ cap, all the while repeating,

After taking as much of the teasing as he could stand, George, hot and sweaty, and in no mood for my father’s jocularity, or his prancing around, threw his cap against the back wall and snapped,
"Well Mal, I’ll tell you one thing, you needn't leave them to me.”

“Because Professor, if you leave them to me, I'll just use them to wipe me arse!"

And in one fell swoop after reading this post, I clicked onto your Amazon link and bought your book! I will now pat myself on the back, for when I first game on board with the Geese and found but one of your posts ( which made me weep for all its poignancy- I believe I made a comment that said as much) I said to myself, "John Anthony Brennan is a first rate writer." It comes as no surprise you have a book!  Cheers to you!

Thanks for the kind words Claire......I hope you enjoy the book and I look forward to hearing your opinion of it.