I was thrilled to hear that long departed Brendan Behan, one of my fellow Irish storytellers, has finally been resurrected. “Brendan at the Chelsea Hotel,” a new play about his time in NYC has recently opened off Broadway to tumultuous reviews and much ribaldry, women chasin’ and bar hoppin’. Behan, a rebel, carouser, drinkin’ man’s drinkin’ man, racounteur and above all a writer, taught us that you can be both a fighter and a writer.

I have here in my possession a letter written to his boss around the time Brendan had the epiphany that told him he should go paint Irish Lighthouses. I think you will agree that Brendan’s artistic temperament shows clearly here and thank God he put the brush down and reached instead for the pen. 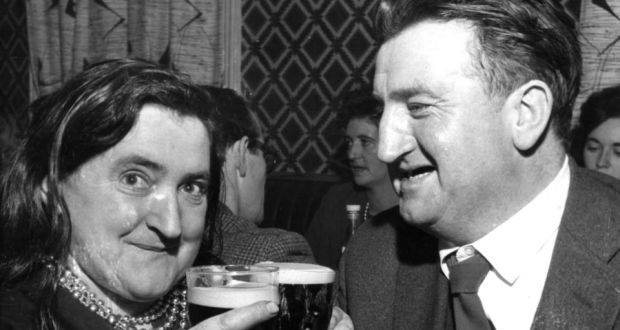 I have to report that the painter Brendan Behan was absent again from his work yesterday. He did not return to his station until 1.27am this morning. No work has been carried out by him yesterday (Tuesday.) I also have to report that his attitude here is one of complete, careless indifference and he has no respect whatsoever for the Commissioner’s property or stores. He is willfully wasting time and materials by opening cans of paint with blows from a heavy hammer, spilling the contents which are now running out through the paint room doors.

Drums of water wash opened and exposed to the elements—paint brushes filthy and lying all around the station—no cleanup of any mess and he just tramps through everything with his big boots. His language is filthy and he sings those atrocious rebel songs on the top of his lungs all day long. He has no respect whatsoever for law and order. He has ruined the surface of a wall in No. 1 dwelling by lighting a fire. He mixes putty, paint etc. with his bare hands and wipes off nothing. The spare house, which was clean as a new pin and ready for painting has been turned into filthy shambles inside of one week. Empty stinking milk bottles, articles of food, coal, ashes and other debris litter the floor of the place which is now in a scandalous condition of dirt.

I invite any official of the Irish Lighthouses to inspect this situation and verify these statements. Behan is the worst specimen I have met in 30 years of service. I urge his dismissal from the job immediately before more good material is rendered useless and the place ruined. I am at my wits end.