John Walsh, right, founder of Galway-based Doire Press, is the latest WG Member of the Day. John, a Derry native,  is a poet, fiction writer, and publisher who lives and works in Connemara. He lived in Germany before moving to Galway in 1989. He is co-director and editor of the press. Check out his personal website, too, at www.JohnWalshPoet.com. This week we’ll be working with Doire Press to bring "Galway Stories," Doire's newest title into the hands of our members, with five copies being given out to those who take part in a community-wide chat session, slated for Wednesday, May 7, at 3p ET / 8p Irish time. By the way, we now have three John Walsh's in our ranks, with John A.and John M. both hailing from the Northeast United States . . . Another of last week's Members of the Day, Jane Sherry Gardner, left, is a resident of Sturbridge, Massachusetts. Jane is a painter, often focusing her muse on seascapes of Ireland’s west coast. She is an ardent student of Gaeilge and has family from the townland of Ballinaboy, County Roscommon. Check out Jane's striking family-history photos via on her profile page.

Fionntán Ó Súilleabháin was busy this weekend in Wexford Town, enjoying the historic and decidedly Latin vibes at the city’s annual Zorro-Fest, a celebration of the life of 17th-century Wexford native William Lamport, the “Irish Zorro”, and the many links between Ireland and Mexico. The life and adventures of William Lamport were arguably one of the strongest inspirations for the story of the swashbuckling caped and masked El Zorro, whose saga filled scores of episodes on a hugely popular television series in the United States in the late 1950s. 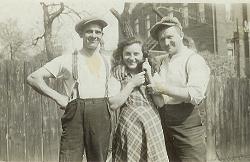 Bit Devine (pic of her gandma and brothers, left) has become WG’s pioneering volunteer moderator. Bit has been actively engaging fellow members from her first day in the community. Bit is a first-rate photographer, with her own fine-art photography gallery in Tucson, Arizona, where she resides. Steeped in music during an earlier career as a singer,  Bit recently reviewed “Larry Kirwan’s Celtic Invasion” for WG. We look to our moderators to help identify standout content, to provide support for fellow members and to eventually moderate specific discussions and immersive learning experiences in their areas of particular interest. Let us know if you are interested in assuming this role, helping us in innovative ways, better explore and celebrate the epic heritage of the Irish around the world.

A Trip Across America. Filmmaker and Dubliner George Gannon, right, is raising money for a new project in support of cancer care for children, and seeks our help. He and colleagues are planning on using scooters to travel coast to coast in their quest. Also check out some of George's striking landscapes from Kerry and around Dublin Bay.

Putting the 'World' in Worldwide