Ask most people who they believe were the first group of foreigners to launch highly organized, violent raids in Ireland, and more often than not, they will say it was the Vikings, who raided Lambay Island in 795 A.D. What many people are not aware of is the fact that a century before the emergence of the Vikings, an equally violent group, not from the fjords of Norway, but from a place much closer to home, beat them to it. (JAB)

On a cold, wet morning in the year 686 A.D a determined individual set sail from a jagged, windswept island that lay nestled on the westernmost edge of the Inner Hebrides, in the wild, north Atlantic Ocean. His long, hazardous journey would take him down the rugged west coastline of Scotland and then inland to the kingdom of Northumbria. He had been asked by the King of Ireland to go to Northumbria and persuade King Aldfrith the Saxon ruler, to release sixty Irish hostages, men women and children who had been taken as hostages from Ireland two years earlier. The man’s name was Adomnan, the abbot of a monastery on the small isle of Iona, founded by the Irish scholar monk Colmcille in 563 A.D. Colmcille had been expelled from Ireland as a result of his involvement in the Battle of Cul Dreimhne (Battle of the Book) and he, along with twelve followers, went into exile on Iona and built a monastery there. The monastery was hugely successful, and would play a vital part in the religious conversion of the Picts during the late 6th century and of the Anglo-Saxons in 635 A.D. Iona went on to take its place as one of the most important monastic centers in Europe.

In the 7th century, the islands of Ireland and Britain were made up of a series of conflicting dynasties and warring kingdoms. It was not uncommon for a king, who felt that he was all powerful, to invade his neighbors and demand fealty. In Anglo-Saxon Britain the most powerful kingdom was Northumbria, ruled by the ruthless king Aldfrith. The kingdom of Northumbria was a medieval kingdom in what is now northern England and south-east Scotland and was reportedly founded by a Saxon leader named Ethelfrith. Ethelfrith, it is believed, defeated the armies of the Britons in approximately 600 A.D. at the Battle of Catraeth (Catterick). In The Britons gave him the name Flesaur, which translates to "the twister." The Saxons were a Germanic tribe that lived close to the North Sea coast of what is now Germany. They amalgamated with another, equally ruthless tribe known as the Angles and immediately started to invade their neighbors. As raiders and vicious plunderers, they were perfectly positioned geographically to send raiding parties to ravage the British Isles. Significant numbers of them settled in large areas of Great Britain in the early Middle Ages and formed part of a large group known as the Anglo-Saxons. Eventually, they became the dominant force and formed what we know today as the United Kingdom.

In the leap year of 684 A.D a large disciplined and well-armed military force, commanded by king Aldfrith’s top ealdorman, Berht, sailed out from the settlements on the western edge of Northumbria and made its way to a staging post on the isle of Manx. Like their counterparts the Vikings, who would follow their lead a century later, the Anglo-Saxons had plunder, pillage and death on their collective minds. The target on this night was the royal Irish kingdom of Brega at Mide (Meath), the seat of Irish power. 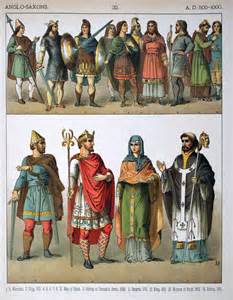 Their oft-used methods were highly successful and had always worked perfectly in the past. It would be no different this time. Move fast, use the night shroud of darkness to surprise, unearthly noise to scare and bewilder, and the sword and axe to subdue. Spare no-one, save the hostages, as they could be used as barter later on. The name Brega translates as the “fair plain” a reference to the large, wide, fertile expanse of land that today straddles the modern counties of Louth, Meath and Dublin. To the east of Brega lay the Irish Sea and to the south, the River Liffey. The kingdom ran all the way north across the Boyne Valley and stretched as far as the mountains in Louth. The king of Brega at that time was Fínsnechta Fledach mac Dunchada.

The term fledach was added to his name as a tribute to the personality of the new king and means “the bountiful.” He had been crowned as the king of Brega and also as the Ard Ri (high king) on the nearby Hill of Tara. Two important supporters of his were the king of Fir Rois and the abbot Adomnan. He belonged to a branch of the southern O’Neill clan, an important, powerful dynasty whose descendants ruled Ireland until their defeat in the nine-years’ war, a war that ended in 1603. By the time the event known as the 'Flight of the Earls' had occurred in 1607 and later, the Cromwellian invasion, which began in 1649, sadly, all traces of the O’Neill’s as rulers vanished.

When they were sated, the invaders retreated; in their wake, a bare, devastated wasteland as far as the horizon. Smoke from still smoldering fires in the fields and storehouses hung heavy on the air, choking and stinging the eyes of the few remaining survivors. Butchered corpses of both human and animal lay strewn in grotesque indifference where they fell. The royal enclosure breached, sacked and burned, in ruin. The headless corpses of the nobles, mutilated in a frenzied orgy of bloodlust, silenced; the royal life-force seeping into the earth. The church and monastery, which once sang the praises of both king and creator, reduced to piles of scorched, scattered stones, forlorn. The houses, usually filled with love, laughter and joyous celebration, now razed with violent hatred, a pitiful sight. Everything of value, including surviving livestock, religious artifacts and hostages, the women and children, were then dragged to the Saxon ships for transport to Northumbria.

The Venerable Bede, a scholar monk and author, from the kingdom of Northumbria, called the action ‘an unwarranted attack on innocent, Christian people,’ and criticized Aldfrith, who planned and authorized the raid. Bede goes on to tell how clerics, including the Saxon bishop Egbert, repeatedly warned against such actions and that God would punish the Saxon king for such a terrible act. Abbot Adomnan ‘s mission was ultimately a success, and he returned the hostages safely back to their families in Ireland. In 688 A.D., Fínsnechta, defeated and demoralized, abdicated his throne and entered a monastery to become a monk. In late 689 A.D., he left the clerical life and resumed the kingship. From "Out of the Ice: Ireland Then and Now."

Thank you Jab, for enlightening us about our ancient history.... wonderful as always

You've filled in so many gaps in my knowledge here John. You're a treasure trove!

We all continue to learn Colm. It's one of the reasons we inhabit this planet. I believe. Then of course, we must pass it on. If we don't, that Whispering Man of yours may pay us a visit. LOL......The research phase is highly enlightening and teaches so much more than I ever thought I knew. I'm glad to hear you are still on the learning curve too.........LOL

Thanks Mary Thorpe. No-one learns more than myself.

My grandmother was always fond of say " we learn something new every day"..... Now going into old age .... I can really understand all of those adages she was fond of quoting..... she had a adage for everything.... shame I did not listen and take Heed . !!!!! we liev and learn

We certainly do live and learn Mary.