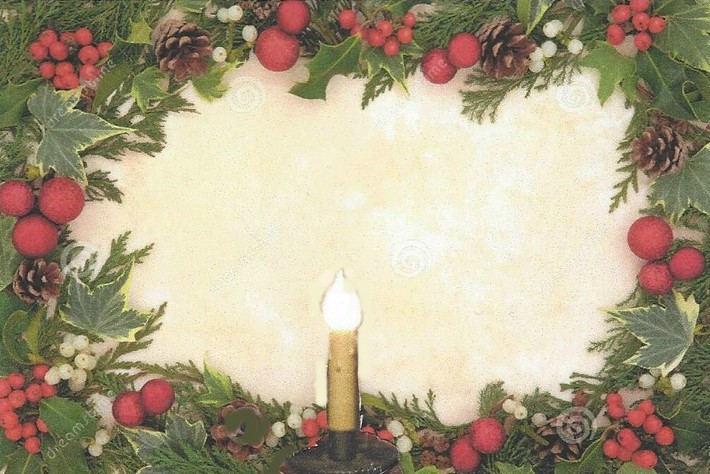 The modern Christmas wreath demonstrates the spirit of the season, but to some, it is also a reminder of another spirit – a spirit that demonstrates courage and fortitude dating back to 16th century Ireland, when the Penal Laws forbade the practice of the Catholic religion. Not only was their religion outlawed, but Irish clergy was on the run with a price on their heads. The Irish people kept the faith though, and secretly met their outlawed clergy to celebrate Mass in the woods, glens, and mountain pass whenever they could. Because of the oppression, Mass might be celebrated only once a month or less, but one time they rarely missed was Christmas. In spite of the terrible times, Christmas still brought a sense of hope. A foreign power may have controlled the land, but they could not control the hearts of the Irish; they still had their customs, their faith, and their pride, and, by God, they would have their Mass. One example can be found in a glen near Drogheda, where stands a Mass Rock which drew people who walked barefoot in a freezing stream so that they would not leave footprints in the snow to betray their destination. Christmas Mass was one custom they were not about to surrender. 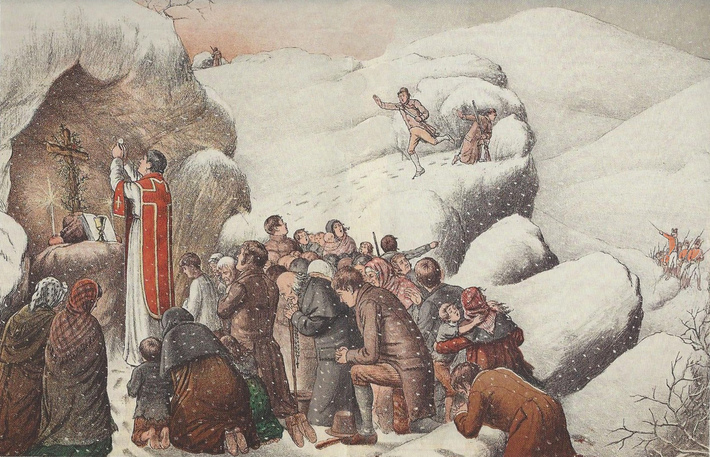 Some of the other Christmas customs that were practiced were older than the race that ruled them. Some had originated back at the dawn of time, in pre-Christian days, like the ringing of doors and windows with holly and ivy. That custom came from the ancient Celtic tradition of ringing one's dwelling with those magical leaves since holly and ivy remained green when all other plants died and were deemed a protective barrier against the killing force of winter. Although the custom carried into the Christian era, its function was now purely decorative. Nevertheless, the Brits marveled at the hope that still burned in hearts they had tried so desperately to suppress.

The source of that hope was their faith, and in each community, courageous families would risk fines and imprisonment to attend a Mass in the dark of night, celebrated by one of the outlawed priests. On occasion, an especially brave household would offer to host the celebration indoors, away from the biting winter wind. Naturally, the house to be used was kept secret until just before the Mass was to begin, at which time a lighted candle was placed in the window to signal the faithful. Once the signal was given, candles were lit in the window of every house to confuse any who might try to interfere with the celebration. To the Irish, the meaning of the candle was clear, but to the stranger, it was merely an extension of the pagan custom of holiday decoration. When an explanation was demanded, authorities were told that it was to light the way for wandering travelers seeking hospitality, as was the holy family all those years ago.

The candle eventually became part of the custom and remained long after its need as a signal disappeared. It also acquired a new meaning of lighting the way for the holy family on their way to Bethlehem (although such a need would indicate the holy family had strayed more than a bit on their journey). However, for those who know the original purpose of the Irish Christmas Candle, today’s Christmas Wreath with a candle in the center provides a reminder of the sacrifices made by our ancestors who placed a candle in a holly-encircled window to send out the message The Lord is in this house tonight. MMc