In days long gone, at a time that is long past, there was a king of Wales called Bran, the Raven.  It was a time of war, and Bran the King sought the strength of an alliance with Ireland.  So a marriage was arranged between the King of Ireland, Matholwych, and Bran’s sister, Branwen.

During the marriage, Bran’s half-brother, Efnisien, arrived and asked, "Why the celebrations?" He was outraged. He ran to Matholwych’s beautiful horses lined up on the beach and slashed them with his sword.  When the Irish King heard, he and his men returned seething with anger to their ships. It seemed that the alliance was doomed before it began. Bran offered gold and horses to make amends but Matholwych was not satisfied.  To restore the peace the Welsh King offered the greatest treasure of his kingdom, the Cauldron of Rebirth which had the power to bring the dead to life. Matholwych returned to Ireland with gold, horses, his bride and the Cauldron. But he did not forget the bloody insult. 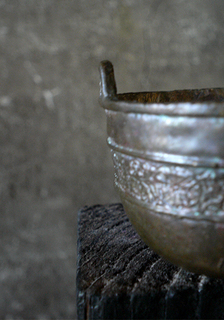 Time passed. Branwen bore a son, Gwern.  But Matholwych’s resentment against Branwen had grown and when the child was old enough, she was driven from her husband’s bedchamber and into his kitchens, to work as a scullery maid. Bran heard of this and swore vengeance and set out to rescue his beloved sister.

As the scores of Welsh ships sailed for the Irish coast their masts appeared like a forest.  Fearing defeat in open battle Matholwych retreated westward, but Bran continued the fight, across Boyne and Shannon and Moy.  Finally, exhausted from the battle,  Matholwych agreed to surrender and abdicate in favour of his son and Bran’s nephew, Gwern.

A celebration followed, but evil still followed evil, and Bran’s half-brother Efnisien, who resented everything won by the Welsh king, in rage, threw the young Prince Gwern into the feasting fire.

The battle resumed with great ferocity. Having the Cauldron, the Irish dead were restored to strength, while the Welsh were whittled away. Near the end of the fight, a poisoned dart struck Bran. Knowing that he was dying, his final request was that his head be buried in London, the city of the God Lugh. The seven Welsh warriors who survived made their way to London, and buried Bran’s head on the White Hill. There, the Tower of London, with its resident ravens, now stands.

Love the story and the bronze work