I was lying on the couch one lazy Sunday evening ‘channel surfing,and doing my utmost to avoid the news channels. I find that watching the news these days only deepens my brooding sense of melancholia and re-awakens the primal urge to run away, wrap myself in animal skins and take up residence in a dark cave somewhere, and live off the land. After some serious and interminably monotonous clicking, I arrived at the Nova channel and stopped flipping when an image of Albert Einstein appeared on the screen. Einstein always caught my attention and as I watched, the presenter was talking about quantum mechanics. Lovely, I thought, my favorite subject. Just as I was about to resume my journey with the remote control, my ears pricked up when the name John Stewart Bell was mentioned. 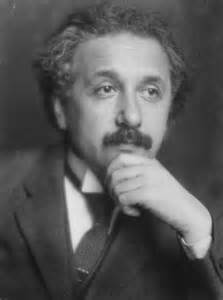 I had heard the name many years before but wasn’t aware then of the importance of this man and made a mental note to do some research on his life and accomplishments. As an Irishman I’m ever on the alert for fellow sons and daughters from the auld sod whose genius and tenacity have added greatly to the collective, global consciousness, despite all of the setbacks placed squarely in their paths, and am saddened that many of them never got the recognition that they so richly deserved, at the time. The presenter was talking about the problem of the ‘entanglement of atoms across time and space,’ which was being probed by Einstein and his contemporaries Boris Podosky and Nathan Rosen. These three intrepid physicists designed an experiment which revealed that the accepted formulation of quantum mechanics produced a result which had not previously been observed, and looked unreasonable at the time. The scenario described involved the phenomenon that is now known as quantum entanglement. Using the initials of their last names, their experiment became known as the EPR paradox. In the early 1930s, the implications of the interpretations of quantum theory troubled many prominent physicists of the day, including Albert Einstein. In a well-known 1935 paper, Boris Podolsky and co-authors Einstein and Nathan Rosen, sought to demonstrate by means of their EPR paradox that quantum mechanics was incomplete. But that conclusion rested on the seemingly reasonable assumptions of locality and realism. As Einstein explained, locality means "there is no immediate action at a distance’" and realism means "the moon is always there, even when you are not looking at it.” These assumptions were the subject of many tempestuous discussions and indeed many arguments between Einstein and the Danish physicist and Nobel laureate, Niels Bohr.

Enter stage right, Irishman John Stewart Bell. A man who had the audacity to question the eminent Albert Einstein and many other noted physicists of his day. A man who inherently knew and fully understood the inner workings of the universe, and set out to inform the world of his findings. Bell was born in Belfast, County Antrim, Ireland, on June 28, 1928 to John and Annie Bell. Both sides of his family were of Ulster Scots roots. When he was 11 years old, he decided that he would become a scientist, and at age 16 graduated from Belfast Technical High School. He then attended Queen's University of Belfast, and obtained a bachelor's degree in experimental physics in 1948, and one in mathematical physics a year later. At Queens University he studied under Paul Peter Ewald, but did much of his groundbreaking work on quantum physics as his hobby, devoting his regular work hours to accelerator and particle physics at the European Organization for Nuclear Research (CERN). He met his wife and frequent collaborator, physicist Mary Ross, when they were both working on the particle accelerator design group in England's Atomic Energy Research Establishment at Harwell, Oxfordshire. In his preface to ‘Speakable and Unspeakable in Quantum Mechanics,’ he wrote, "I here renew very especially my warm thanks to Mary Bell. When I look through these papers again I see her everywhere." 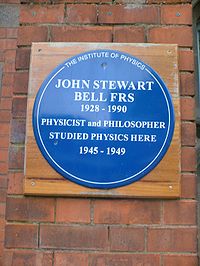 John Stewart Bell was the originator of "Bell's theorem" which explained the two-quantum puzzle as a more straightforward mathematical proposition, showing that in quantum particles generated as a pair, a measurement of one particle changes the same property of its paired counterpart instantaneously, even if the particles are separated by vast distances. This suggests that the two particles remain connected in some unknown manner, sharing some quality beyond space and time. "Reality must be nonlocal", Bell wrote, asserting that "the atom's measured attributes are determined not just by events happening at the actual measurement site but by events happening at a distance, including events outside the light cone." Seeming to defy all logic, common sense and the genius of Albert Einstein, Bell's assertion has been supported by some subsequent experiments, challenged by others, and remains controversial.

Note* His cousin, Billy Bell, was Mayor of Belfast from 1979-80, and Mayor of Lisburn, Co. Antrim from 2002-03. He is believed to be the only person to serve as Mayor of two different cities in the United Kingdom.

Astounding to read that at 11 years of age, Bell decided he wanted to be a scientist!  A lot of research went into this well-composed piece, and I thank you for sharing it here.

He surely was a determined young man. Thanks for the feedback Claire.