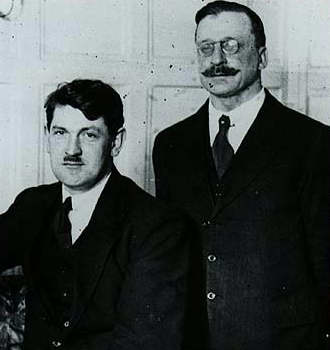 My country men awake! arise! our work begins anew!
Your mingled voices rend the skies, your hearts are firm and true,
You've bravely marched and nobly met, our little green isle through;
But, oh! my friends, there's something yet for Irishmen to do!

On July 11, 1921, a truce was declared between the forces of Great Britain and the Irish Republican Army. The war that had begun on Jan. 21, 1919, known by some as the War of Independence and by others as the Black and Tan Wars was over, for the moment, at least. Neither side had surrendered to the other, neither could claim victory, where did they go from here? The answer, of course, was to attempt to negotiate a treaty that would give Ireland some form of self-rule. By the very act of their agreeing to the ceasefire, the British had conceded that they would have to agree to some form of self-rule; but it was fairly certain that they would start negotiations by offering only the weakest of self-rule plans possible, and one that was sure to exclude six of the nine counties of Ulster. For their part, the Irish had already declared a 32-county republic, and said they would accept nothing less. Now the two sides would have to sit down and see if they could find some way to resolve these two diametrically opposed ideas.

Above right, Michael Collins, and Arthur Griffith, right, carried a nation's destiny in their hands, and cast their fate with a treaty that would lead to Collins' assassination and a bitter civil war.

Though neither side in the conflict was militarily defeated, unlike the British, the vastly outnumbered and ill-equipped Irish could not ever hope to defeat their opponents in the field. What they could do was what they had done already, fight them to a standstill and make the world see them as a bully, mercilessly beating on a smaller neighbor. Luckily for the Irish in this regard, they had the total cooperation of the Black and Tans. The brutal retaliations against defenseless Irish villages and people by these police auxiliaries had sickened and disgusted most of the world, including many in England, and played a large part in England's decision to negotiate. Their most infamous atrocity was the murder of eleven spectators at a GAA football match at Croke Park, Dublin, on Nov. 21, 1920, Ireland's first "Bloody Sunday." As difficult as it may have been for the Irish to fight the British in the field, where England had a great advantage in men, materiel and military experience, the Irish faced an even wider disparity in experience at the negotiating table. The British were old hands at getting their way during negotiations all over the world; the Irish delegation would be like babes in the wood in comparison. One of the great controversies of the Treaty negotiations has always been: why wasn't Eamon de Valera on the Irish negotiating committee? This was a job for a politician, Michael Collins was Ireland's leading soldier, but de Valera was their political leader -- surely he should have gone. Collins argued with de Valera long and hard, as did many others, but the one man who counted was opposed to de Valera going, and that was Dev himself. Why didn't he want to go? We may never know that, but he was a master politician and he had to know that this negotiating team had little or no chance to come back with a republic.That would have been much too big a loss of face for the British; they would very likely renew the war before agreeing to a republic. And de Valera knew that hardline republicans in Ireland were never going to accept less. He would wait, he would see what they brought back from London, and then make his decision to support it or oppose it. But either way, he would avoid being to closely identified with it. How people interpret that action often depends on their feeling for Dev. De Valera partisans say the best thing for Ireland was for him to maintain room to maneuver by not being party to the negotiations; his worst critics say he didn't have the courage to be a party to the compromise he knew was inevitable. The men who set out to London with the unenviable, perhaps impossible task of trying to turn England's first colony into a republic were: Arthur Griffith, Robert Barton, Eamon Duggan, George Gavan Duffy, and Collins. Sitting on the other side of the table were Lord Birkenhead, once a leading spokesman for the Ulster Unionist party; Sir Hamar Greenwood, who had strongly supported a rigorous prosecution of the war against the Irish; Winston Churchill, whose father Randolph had done so much to polarize the opposing communities in Ireland; Austen Chamberlain, L. Worthington Evens, Gordon Hewart and the British Prime Minister, Lloyd George. This was not a committee that should have given rise to optimism for the Irish cause.

Negotiations began in London on Oct. 11 and continued all through October and November with no agreement reached. The British were offering only dominion status, insisting on an oath of allegiance to the crown and an exclusion of the six counties in Ulster. The first might have been acceptable to many if it didn't come with the oath, and the last was unthinkable, if it were to be permanent. On Dec. 3, these terms were rejected by the Irish cabinet. The negotiations were at an impasse, but Lloyd George was about to play the card that England always used as the end game with the Irish: physical force.

The negotiations resumed on Dec. 4 and on the night of Dec. 5, Lloyd George presented the Irish with an ultimatum: Sign the treaty or the war will begin again in three days. Griffith and Collins were ready to sign. Rightly or wrongly, Collins believed that the Irish forces could not sustain the all-out war the British were likely to initiate; certainly Collins would have been one of the finest judges of this. The Irish delegates left the hall to discuss the possibilities. Griffith was adamant that the treaty must be signed. Barton, perhaps the most staunchly republican among them, held out. But finally the idea that he might be personally responsible for a renewal of the war was too much for him, and he agreed to sign. Barton would later regret that decision and fight on the anti-treaty side in the Civil War.

As the hours went by, the British awaited word. Lloyd George later admitted that, "We had doubts as to whether we would see them again." Then the word came, the Irish were on their way back. To accept, or to formally reject, that was the question in the minds of the British. And so, at 2:30 in the morning, the Anglo-Irish treaty was signed. The authority of the Irish delegation to sign the treaty at all was certainly in question:

They had been told not to sign without referring it to the cabinet. But Griffith and Collins had made the dangerous decision to go ahead and that danger was more than political. This knowledge is illustrated by Collins' comment to Lord Birkenhead during the signing of the document. Right after he signed, Lord Birkenhead turned to Collins and said, "I may have signed my political death-warrant." Collins gazed back at Birkenhead and replied, "I may have signed my actual death-warrant." Collin's premonition proved correct.

Said Winston Churchill about the demeanor of Michael Collins, below right, during the treaty talks: "In all my life, I have never seen so much passion and suffering in restraint." Collins died in an ambush by anti-Treaty gunmen on Aug. 22, 1922. 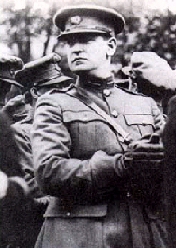 Did Collins and Griffith do the right thing in signing? It has been debated ever since. This is a question that can never be answered with certainty, because no one can predict the outcome of different historical decisions with 100 percent accuracy. Perhaps the Irish could have held out against the might of Britain longer and attained the 32-county republic, or perhaps Lloyd George was bluffing. Collins may have been wrong to sign the treaty, he may have been wrong in many of the other decisions later during the time leading up to the Civil War, a fateful turn as the treaty is the root cause of the present "troubles." But Collins, arguably more than any other man in the Irish revolutionary movement, attained the eventual freedom of 26 of the 32 counties and all who believe in Irish independence must respect him for that. Go ndéanaí Dia trócaire ar a anam.

MORE OF THE IRISH WAR OF INDEPENDENCE