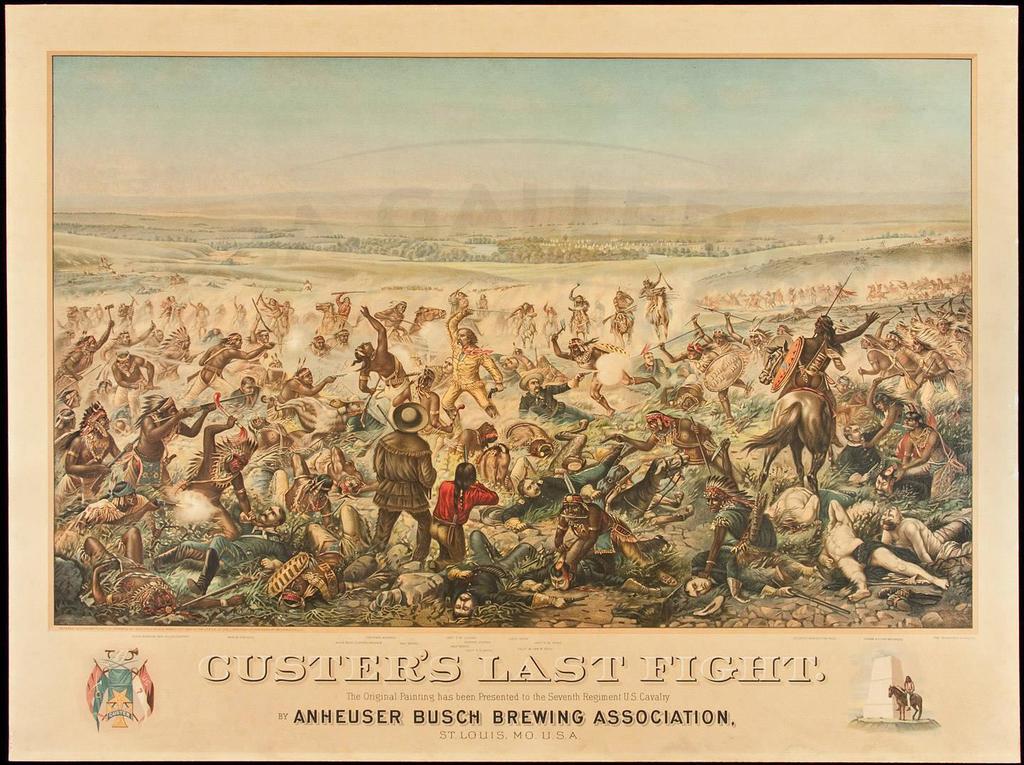 It was one of the most iconic battles in American history.

The charismatic General George Armstrong Custer and almost 600 troops of the 7th U.S. Cavalry rode into the Little Bighorn Valley determined to strike at a Sioux and Cheyenne encampment located on the banks of the nearby river. It was to be the regiment's moment of glory, but the attack instead led to its decimation, along a three-mile field of slaughter.

Riding with Custer were 103 Irishmen, ranging in rank from newly recruited troopers who could barely stay mounted to a Carlow native who was one of Custer's most redoubtable officers.

A long way from the western Irish seaboard they once called home, County Clare men Pvt. Edward Connor and Sgt. Martin Considine would be among the 200 or so troopers who were butchered on that bleak Montana landscape.

In contrast, Pvt. Thomas O'Neill from Dublin would make a daring escape after he found himself alone during Major Marcus Reno's retreat. At a later stage in the battle, County Louth native Thomas Callan also bravely ran the gauntlet of bullets and arrows to fill canteens at the Little Bighorn River, an act for which he and many others, including Monaghan-born Sgt. Thomas Murray, would receive the U.S. Medal of Honor. On that sweltering June day in 1876, the Irish experience at "Custer's Last Stand" varied from one of unflinching courage to that of terror.

The Irish have always played an important role in the American armed forces, starting with the Revolutionary War militia instrumental in breaking the yoke of British rule. More than 100 Irish-born minutemen and militia were among the 400 revolutionaries who defended the Old North Bridge in Lexington on April 9, 1776, and repelled the British advance, thereby triggering America's transition from a colony to a sovereign nation.

In every major battle that occurred while this fledgling country grew in stature, Irish blood was almost certainly shed. Their role in its history became all the more prominent when, in the mid-1850s, 1 million Irish fled their native shores to escape a land ravished by poverty and famine. They flooded into the coastal cities of New York, Boston and New Orleans seeking refuge and a new beginning.

To the Irish and other immigrants, the military offered a means of escape from destitution and prejudice, and a source of secure employment. Estimates vary, but some historians have suggested that as many as 150,000 Irishmen fought, on both sides, during the five-year American Civil War. From the Union Army's Irish Brigade to the famed Confederate outfit, the Louisiana Tigers, aka "Irish Tartars," the immigrant soldiers incorporated their own national identity into the ranks of the armies in which they served.

In the West, as one war ends, another heats up

After the war ended in 1865, many veterans again found themselves unemployed, as the government, naturally, scaled down its military might. However, with a soldier's profession viewed with condescension, if not contempt, the immigrant Irish and Germans were once more likely to fill the military's rank and file.

With the issue of secession finally settled, the reunited United States of America now looked to expand further into the trans-Mississippi west, and for immigrants, the prospect of the Army's poor pay and conditions would be leavened by the opportunity to acquire land and a fresh start beyond the ever-more crowded cities and Eastern states.

Close to 47 percent of the men recruited by the Regular Army between the end of the Civil War and the Battle of the Little Bighorn were foreign-born. The Irish provided the largest contingent of these, with 38,649 or 21% of all enlistees, over that 11-year period. Once again, the American military would have a tinge of green in its ranks.

At the vanguard of this Western expansion were newly formed regiments of cavalry, the most famous of which would become the 7th U.S. Cavalry. Its prominence, in the initial stages at least, derived from one of its commanders, the flamboyant war hero, George Armstrong Custer. Dubbed the "Boy General" after his rapid rise through the ranks of the Union cavalry, Custer was assigned a posting with the 7th Cavalry. While not its overall commander, as its Lieutenant Colonel, he would usually command it in the field.

The regiment was one of light dragoons, and it would primarily have a policing role, protecting settlers and traders along emerging migratory routes that crossed into lands traditionally occupied by the local tribes. Even prior to the American Civil War, conflict between the Army and the Indians had been common place. The name "General Custer" and the 7th U.S. Cavalry would soon become inextricably linked as the regiment went into action against the Plains Indians.

This was to be a difficult posting for the Irish as they travelled to the various forts and posts throughout the Western frontier. Best-selling author, Jeff Barnes, whose forthcoming book, "The Great Plains Guide to Custer" will investigate the places where the 7th Cavalry served, explains that "most Irish soldiers -- and this really applied to all soldiers -- experienced a life that was hard and often monotonous at a frontier outpost."

The Irish shape the 7th Cavalry

Barnes' research indicates that the majority of the men saw "little or no combat and spent long days in routine manual labor and subjected to sometimes cruel discipline." "Still," the American writer said in an interview, "if you were poor and uneducated, enlistment offered better opportunities for recent immigrants than they could find in the civilian world. They learned about obedience, self-reliance, cleanliness and other virtues that would help in life after the Army."

Not all of Custer's Irish were from impoverished backgrounds. Born to middle-class Catholic farmers in County Carlow, Myles Walter Keogh had the distinction of being the only Irish-born officer in the regiment. He gained his rank of fourth senior captain in the 7th Cavalry not as a result of any West Point military training or family connections but for his gallant service during the American Civil War.

Promoted to brevet lieutenant colonel by 1866, Keogh was a rarity among those of Irish birth. This was mainly due to the prejudices that existed in the officer corps of the American military at the time, particularly in the postbellum period. Army commander Phil Sheridan, another renowned cavalry leader, never highlighted his County Cavan roots, claiming to be born in Albany, N.Y., with his mother later claiming that he was born at sea.

Outside of the officer corps, the Irish did, however, make their mark in the 7th Cavalry's chain of command. The stereotypical Irish-accented sergeant from the movies who would shout instructions at recruits in a "brogue" is largely based in fact. The Irish provided a large number of noncommissioned officers in the 7th, with First Sergeants Michael Kenney from Galway and Michael Martin from Dublin the two highest-ranking. There were also 15 sergeants and three corporals from Ireland who rode into battle with Custer on that fateful day in 1876.

Nathaniel Philbrick, a Pulitzer Prize nominee and author of "The Last Stand: Custer, Sitting Bull, and the Battle of the Little... (Viking, 2010), is also keen to highlight the huge contribution made by Custer's Irishmen. "Not only were some of his best and most colorful soldiers Irish, such as Myles Keogh," Philbrick said in an interview, but "his (Custer's) trademark buckskin outfit was also made by an Irish tailor (Sergeant Jeremiah Finley from Tipperary)."

After years of research in preparation for his New York Times best seller on Custer's men, Philbrick concludes that "while the Seventh was an American regiment, much of its character was established by its Irish-born troopers." So Jeremiah Finley was only one of the many Irish who contributed to the regiment's colorful legacy.