Although I belong to five groups who march, and my first time marching was in 1981, for me to march this year would be to suggest that I somehow endorse or support the current leaders of this parade, and the direction in which they want to take it. (And before the single-issue people comment, I need to make clear that this is NOT about gay groups marching under their own banner.)

The affiliates have no voice in the running of the parade, and those elected to fill that office have been completely ignored and cut out. A few people have mortgaged the financial future of the parade to a long-term expensive television contract, and the influence of the representative of the Irish government has reached scandalous proportions. The parade leaders have simultaneously announced fund-raising triumphs at the same time they try to intimidate poor parishes and schools to paying “arrears” of fees that had been waived in past years.

The full list of the shameful and dubious actions of the parade leadership is too long to include here, but the bottom line is that in conscience, I cannot even peripherally be seen to be a part of what used to be a great event. With great sadness, I will watch the parade from the sidelines for the first time in over 40 years. I take no comfort in knowing that I will not be alone, that many others from whom I have heard are taking the same action.

I look forward to the day when the cabal of the few are replaced by the voice of the people, and when the culture and history and tradition of the Irish will replace the greed and power struggles of the “politically correct” triumvirate.

I respect your principled decision.Could someone else give us a neutral account of the goings on behind the scenes at the planning for the parade? I'm financially  naive .It amazes me that parishes have to pay to be included.Or are these fees within reason and defray expenses of the Parade?

For more background on the controversy, we direct you to http://thewildgeese.irish/profiles/blogs/st-patrick-s-day-parade-th... 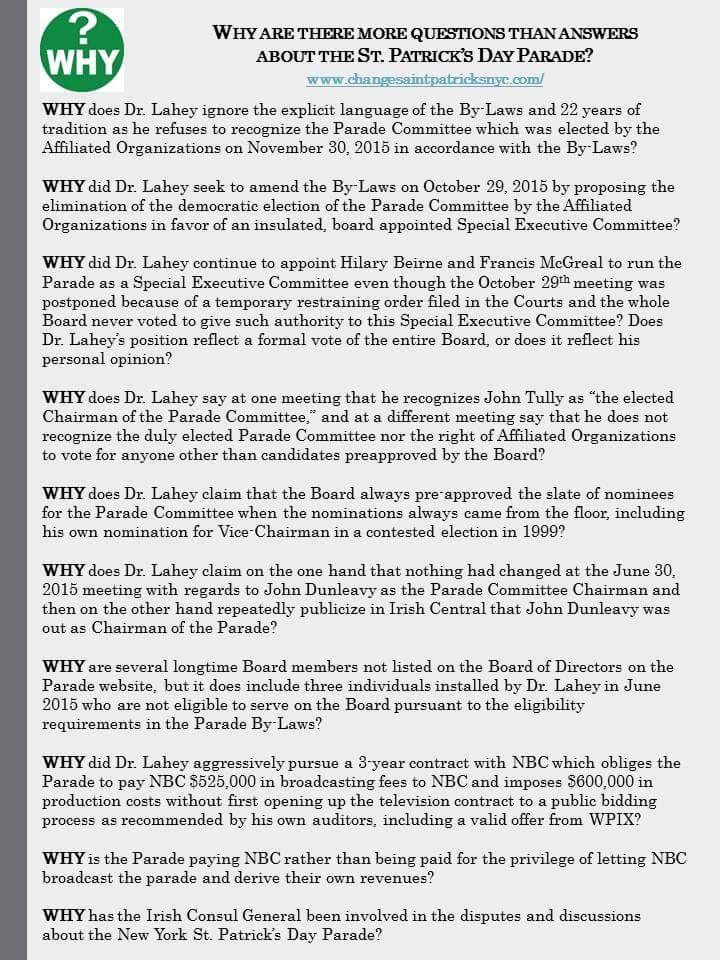 Above are two pages of just questions - note that there is no comment on gay groups marching under their own banner, not even a part of the current conversation. Lahey has cancelled the volunteer tent, and given away the parking that used to be for volunteers to NBC cronies and employees of Board members. It just goes on and on and on - every time we turn around it's a new outrage, and at this rate, I shudder to think what the parade in the future will be like. What's next? to give in to city pressure and have the parade on a Saturday?? And in order to be more "inclusive" and not offend anyone, we'll call it the Irish Day Parade rather than St. Patrick's Day.

Comment by Ann McLaughlin on March 15, 2016 at 2:59pm
Don't get discouraged, it's not the Irish way. Put on your brightest green and March for your values and what you believe in. And my grandmother was a Sheehan....