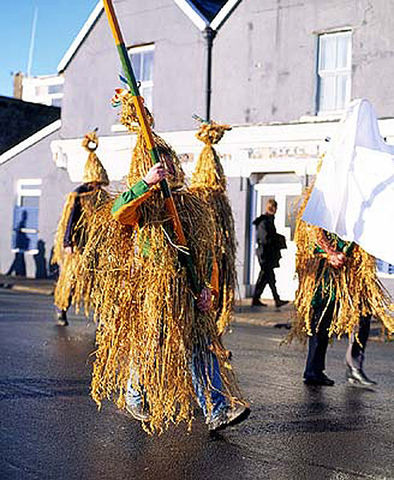 Celtic myth had it that the robin that was suppose to represent the New Year killed the wren which represented the Old Year,  During this time Wren Boys blacken their faces and go from house to house asking for money to bury the wren. The money they collect is used to buy food and drink for the "wren dance" held on this night.

St. Stephen's Day is a national holiday in Ireland, but, the celebrations have little connection to the Saint.

In Ireland, St. Stephen's Day is the day for "Hunting the Wren" or "Going on the Wren." Originally, groups of small boys would hunt for a wren, and then chase the bird until they either have caught it or it has died from exhaustion. The dead bird was tied to the top of a pole or holly bush, which was decorated with ribbons or coloured paper.
Early in the morning of St. Stephen's Day, the wren was carried from house to house by the boys, who wore straw masks or blackened their faces with burnt cork, and dressed in old clothes. At each house, the boys sing the Wren Boys' song. Such as:

The wren, the wren, the king of all birds,
On St. Stephen's Day was caught in the furze,
Although he is little, his family is great,
I pray you, good landlady, give us a treat.

My box would speak, if it had but a tongue,
And two or three shillings, would do it not wrong,
Sing holly, sing ivy--sing ivy, sing holly,
A drop just to drink, it would drown melancholy.

Sometimes those who gave money were given a feather from the wren for good luck. The money collected by the Wren Boys was used to hold a dance for the whole village.

There are different legends about the origin of this custom. One is that St. Stephen, hiding from his enemies in a bush, was betrayed by a chattering wren. The wren, like St. Stephen, should be hunted down and stoned to death. Another legend holds that during the Viking raids of the 700's, Irish soldiers were betrayed by a wren as they were sneaking up on a Viking camp in the dead of night. A wren began to eat breadcrumbs left on the head of a drum, and the rat-a-tat-tat of its beak woke the drummer, who sounded the alarm and woke the camp, leading to the defeat of the Irish soldiers and the continuing persecution of the wren.