As we know from the ancient Celtic legends, our ancestors were very fond of a board game named Fidhcell by the Irish and Gwyddbvyll by the Welsh. It was like chess, often being proclaimed as one of the precursors of our modern chess game, and was reportedly played by Kings and Gods alike. Tara: Ireland’s Royal Board Game has many fidchell-like qualities and it would be easy to see early kings or nobles enjoying the strategic aspects of this game as they fought for territory on the board, much as they might on the field of war.

The game itself is a superb 2-player game with many rules variants found both with the game and on the supporting website (which is also where you’ll find superb tutorial videos). The game was initially developed in 2004 and has solidified itself over the intervening years – with Murray Heasman, the developer of the game, providing us with Rules expansions, revisions and continual monitoring.

It is beautifully presented, and as the game unfolds areas of interlacing Celtic knot-work begin to stretch out across the board and tease the eye as you search for your next move. Although there is a rules variant, that allows young children to happily play and enjoy the beauty of the game, its real strength lies in its strategical aspects. The beautiful simplicity of the game, comparable to chess in many ways and perhaps more so to the ancient Japanese game of ‘Go‘, reveals its strengths as two rival minds inter-lock and compete in battle for territory across the board. 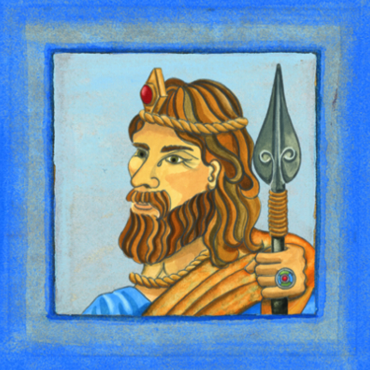 The game is played with ‘Forts‘ and ‘Bridges‘ – each a visual reminder of the hill-forts and stone bridges of the beautiful landscape around Tara from which the game takes its name – and ‘Kings‘ that dwell within the ‘Forts‘. Using the single set of pieces that comes with the game five different games can be played: Sacred Hill,High Kings of Tara, Four Treasures, Poisoned Chalice and the Stone of Destiny. Murray tells us that the idea and later the name of the game came from the twin ring-forts at the top of the Hill of Tara and it is easy to see how his inspiration went on to produce this award-winning game.

The beautifully illustrated board is printed onto cardboard but the pieces themselves are built of an impact-resistant plastic and feel quite solid to handle and play with. Tailten Games, the producers of the game – the company itself named after the Royal Games instituted by the God Lugh in honour of his foster-mother Tailtiu and later the town, Teltown in Co. Meath – even produce a luxurious, deluxe ‘Collector’s Edition‘ version of the board which is made of beautifully hand-crafted crushed stone.

To read more visit our website at :  Celtic Myth Podshow

Lovely to read about your experience with Tara. Go raibh maith agaibh.

Excellent review...waiting for my shipment of the games... I have been talking it up in the shop since our conversation in the forum here

Hope you guys enjoy it as much as we did! :) xx