Ennis, County Clare, Ireland – Venerable Gaelic Athletic Association founder Michael Cusack (left) is gaining new scrutiny, in this, the centennial year of his passing. As well as picking up his own website in September, next year an exhibit will open on "The Citizen" in his native Clare.

It's hard to overestimate the unique legacy of this Irish sporting legend, who died in 1906 at age 59. To appreciate his achievements, it is vital to understand the physical, emotional and intellectual environment that conditioned him. For it was the heart of Clare that beat in Michael Cusack — "Rugadh mé i bparóiste an Chairn, Boirinn, Contae an Chláir" — he proclaimed to all and sundry in his 32 years living and teaching in Dublin.

Cusack was born in Carron on Sept. 20, 1847. He was a proud Clareman, and few if any of the many famous people from the Banner County have brought greater honor to it. Michael was fortunate to see the light of day within The Burren, a strange but beautiful lunar-like region that is petrified forever in carboniferous limestone. Here, Michael would have seen many unusual plants, from the cold Arctic, the high Alps and the warm Mediterranean, growing side by side and in profusion.

He grew up surrounded by one of the largest turloughs (seasonal lakes) in the world, dolmens, stone forts, many ruined churches, caves, wild goats, unusual birds, butterflies and animals. Michael spent the first 17 years of his life in a university environment, where he had many impulses from sources that were to benefit him later. The ancient O'Davoren law school at nearby Cahermacnaughten was the Yale (or the Harvard) of the old Gaelic order, and Annals of the Four Masters had to be brought before the ollaimh (historians) of Kilkeedy for their seal of approval. From his parents, who both died when Michael was a child, he received a deep Christian faith and an enduring love for the Irish language. It is believed that Cusack did not speak English until 12 years of age.

It is true that when Cusack founded the GAA, he was operating not in a national vacuum but in a continuum of a tradition in which he was steeped. The young Cusack, a member of the Fenian Brotherhood, would have been acutely aware of stories of the United Irishmen's resistance in Clare in 1799. References elsewhere in the National Archives to Cusack's uncle, Martin Flannery of Drumcliffe, Ennis, place him at the head of 25 Fenians charged in Clare in 1867. Cusack himself later wrote in the United Irishman, of March 25, 1899: "I resolved to be a Fenian. In order to be a Fenian, I had to be a hurler." The grievances that led to the 1899 Clare uprising remained even then, and continued to trouble the county until independence 23 years later.

Though the visitation of the Great Famine nearly eliminated native traditions and pastimes from the Irish countryside, Cusack did recall how he played the game of hurling in his youth:

In Cusack's world, it was not men but giants who played, people cut from the limestone plateaus of the Burren. It was this world, which he did not create, that he preserved for the Irish nation. He was acting in a continuum of a tradition bequeathed to him from the Gaelic poet Brian Merriman's era and before. For it were the qualities of skill and bravery that got one a game, and it was where one lived that determined whom one played for, not the class distinction that Cusack raged against in the 10 years before the GAA was founded in 1884. The first President of Ireland, Douglas Hyde, said of Cusack:

"The establishment of the Gaelic Athletic Association by my old friend Michael Cusack, I was one of its earliest members, was an enormous step in the direction of Irish nationhood. I knew that Michael felt it so himself, and hence his remarkable power and enthusiasm to the last day of his life an enthusiasm which was something more than a mere game as a game could ever have evoked."

Crucially, Cusack gained acceptance from the establishment in pre-independence Ireland, bolstered by his education, his bilingual prowess, his internationally reputed academy, his national achievements with the shot put, general sporting prowess and his commitment to better the existing sporting structures of Ireland. Nevertheless, this son of a Clare herdsman despised sporting and social exclusiveness. "The idea of doing something for our national pastimes what my colleagues were doing for our national language was taking firmer hold of me day after day," he later reflected in his Celtic Times newspaper.

It was Cusack's custom to greet people as "Citizen." This sporting republican sought to formalize an organization that recognized all athletes as "gentlemen," rejected unfair handicapping and wagering, and anglophilic, urban-centered, and sabbatarian leanings, which held that sports profaned Sunday, the only day free of work for most of the Irish populus. Indeed, Cusack, despite often being portrayed as a combustible character, had the political foresight to persuade such establishment figures as Dr. Hugh Auchinleck, of the Royal College of Surgeons of Ireland, to become president of the Dublin Hurling Club, a precursor of the GAA, in 1883. The club drafted a set of 12 hurling rules, adopted in the college that year. Sean McCague, president of the GAA in 1983, stated at a function to mark the centenary of the adoption of these rules that the action of the club "saved hurling from extinction."

Yet Cusack knew that it would ultimately take a codified national structure, modelled on the parish system, to rejuvenate the post-Famine Irish peasant who by now in his own words "wasted his idle hours in smoking 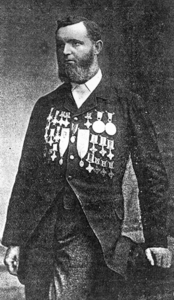 and card playing." The Cusack of the early 1880s was acutely aware that if a new sporting initiative was not undertaken soon, Ireland would be permanently despoiled of the bricks of nationality. This new association would in effect represent a sporting reincarnation of the pre-Famine Catholic Emancipation and Repeal mass-movements. Cusack himself admitted that "every social movement in Ireland is to a certain extent necessarily political."

A carefully choreographed sequence of letters published in the national press culminated in a short letter appearing Oct. 27, 1884, signed by Maurice Davin  (right), the famed Tipperary world champion athlete, and Cusack. It invited readers to attend a meeting in Tipperary in Thurles on Nov. 1 to form an association for the "preservation and cultivation of our national pastimes and for providing national amusements for the Irish people during their leisure hours."

In November 1884, the Gaelic Athletic Association was born. Thurles was its cradle; Davin, the true father of Gaelic Football, was its president. That the Ard Stiúirthoir (Director General) of the GAA today, Liam Mulvihill, can trace his post back to the GAA's first general secretary testifies to both the scope and the success of Cusack's great aisling (vision). That post was held by Citizen Cusack.

An anonymous account from a Clare Association journal from the 1970s, in the Archives of Irish America at NYU, states of Cusack:

"Seldom has an institution and the man who conceived it been so absolutely the reflection of each other. Through many vicissitudes, Cusack saw it grow and saw it attacked from within and from without. ... Irishmen and Irishwomen all over the world revere the name of this great Clareman for he preserved for them the gems of Irish culture, our Gaelic Games."

Clare-based author and historian Daniel McCarthy is currently story-lining the forthcoming Michael Cusack exhibit at the Cusack Memorial Centre and Homestead in Carron, County Clare, opening in early 2007. For more information about Cusack, visit the official Cusack commemorative website, www.michaelcusack.ie. McCarthy can be contacted via e-mail.