He is one of the most iconic figures of the American Civil War and, as the commander of the Union Army’s Irish Brigade, Thomas Francis Meagher (right, from from Arthur Griffith's "Meagher of the Sword," Dublin, 1916) is probably the most famous of the Irish-born soldiers who fought during that five-year conflict. And he spent his childhood in County Kildare.

Born in County Waterford, Meagher spent most of his formative years as a student at Jesuit-run Clongowes Wood College “the dear old college” as Meagher called it, beside the Kildare hamlet of Clane. In his memoirs, we get a glimpse of the childhood that forged the man who fought for the independence of his homeland and led men into battle in his new home across the Atlantic. And what an adventure-filled life the adult Meagher was to lead!

Meagher opposed British rule and was one of the most prominent members of the Fenian movement in Ireland during the 1840s. The Irish tricolour, now the Emerald Isle's national flag, was the brainchild of Meagher and was flown proudly for the first time in Waterford City.

Exiled to Tasmania in 1849 for his part in the failed rebellion of 1848, Meagher fled to the United States in 1852.  He eventually settled in New York, where he once more became active in the Irish independence movement. In 1861, at the outbreak of the American Civil War, Meagher raised an Irish company as part of President Abraham Lincoln’s Union Army.

He served as a major in the 69th New York Militia at Bull Run, the war’s first major battle, before being mustered out with his regiment August 3, 1861. That winter, he organized an Irish Brigade to join Lincoln’s forces and by early the following year his commission as a brigadier general came through. He led his Irishmen in some of the bloodiest engagements of the war, including the Battle of Antietam, where he was injured in a fall from his wounded horse as his brigade stood toe-to-toe with the Confederates during the fight at the Bloody Lane.

At Fredericksburg in December 1862, Meagher led his command up a steep slope into a maelstrom of shot and shell. The brigade was slaughtered in the assault on the entrenched Southern defenses, but won praise from friend and foe for their bravery. Nonetheless, almost half the men of the Irish Brigade were now dead, wounded or captured.

The military authorities refused to grant Meagher permission to recruit to replenish his decimated ranks and, after the battle of Chancellorsville, he resigned in protest at a proposal that regiments of the Irish Brigade be distributed among other commands. His resignation was rejected and he returned to duty, holding minor commands in the Western theatre of the war. He finally resigned in May 1865, just over a month after the South had surrendered.

After serving over a year as acting governor of Montana, he fell off a boat on the Missouri River and drowned. Mystery and conspiracy surround his death to this day. Meagher was extremely popular with the citizens of Montana but had continued to agitate those in high office. Reputed to have been drunk when he fell into the river, there are also theories that the Waterford man was pushed to his death.

Nicknamed “Meagher of the Sword,” his writings and speeches were acclaimed. In 1916, Arthur Griffith edited Meagher’s recollections of his time in the Irish nationalism movement of the 1840s, including tales of his years attending Clongowes Wood.(right) 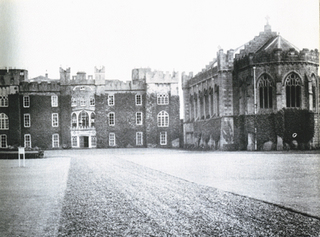 In his writings, Meagher remembers the college standing very nearly in the center of a circle of ancient towns. He describes these towns Clane, Kilcock, Celbridge, Naas, Prosperous and Maynooth as:

“… very old and ragged, with very little life stirring in them, they seemed to have gone asleep many years ago, and to have at last waked, half suffocated, shivering, and robbed of the best of their clothes. In the brightest day of the summer, they impressed one with this notion. In the drenching black rain of December, their miserable appearance chilled the blood of the fattest stranger who chanced to pass through them …”

Meagher’s recollections of Clane, the closest town to the college, are vibrant and descriptive. He defines Clane as a one-street town that numbered a hundred houses, with every second building a “shebeen,” or tavern, “dedicated, as the sign-boards intimated, to the entertainment of Man and Beast.” One establishment, located next to the post office, apparently had a sign-board where a “Cat and Bagpipes rampantly figured,” while on another, “a red coffin, with three long clay pipes crossed upon the lid, and a foaming pot of porter pressing down the pipes…gave the public to understand that the wakes of the neighbourhood would be ‘conveniently’ supplied.” He shared childhood memories of the police barracks in Clane, in particular, the policeman “perpetually chewing a straw outside on the doorstep, rubbing his shoulder against the white-wash of the door post, and winking and spitting all the day long.” However, Meagher does find fault with the Jesuit academics and teachers in Clongowes Wood. Fervent in their teachings of Greek and Roman literature, and giving the students “a look, through an interminable telescope, at what was doing in the New World,” they left the boys “like blind and crippled children, in the dark” when it came to the history of Ireland. Meagher seemed particularly taken with the rich heritage that County Kildare had to offer:

“They never spoke of Ireland. Never gave us, even what is left of it, her history to read . … What true scholars and patriots they might have made, those old Jesuits of Clongowes, had they taken their pupils to the battle-fields of William Aylmer's army — skirting the Bog of Allen — or to the Geraldine ruins of Maynooth, or the grave of Wolfe Tone in Bodenstown churchyard, or to the town of Prosperous, where Dr. Esmonde buried the Red Cross under the hot ashes of his insurgent torch, or to the woods and mansion of Rathcoffey, where Hamilton Rowan once lived. . . . What true scholars and patriots, Irishmen in nerve and soul, might they have made us had they taken us to these sites, instead of keeping us within the pillars of the Parthenon, or the forum and shambles of the Tiber?”

Thomas Francis Meagher finishes his memoirs of Clongowes Wood by writing that it still was “a dear old spot” to him and leaving us the interesting fact that he carved his name into an old tree somewhere on the college grounds. Perhaps even today the tree still exists, the initials “TFM” visible to passers-by. WG

Further information on the Irish in the American Civil War can be found at www.irishacwtrail.com .