He would have stood out anywhere, and standing in front of the entrance to a boutique hotel in Spiddal, wielding a black walking cane with an ivory handle two paces before him made him glaringly incongruous to everything I’d come to know about the western coast of Ireland. He wore a three-piece suit on his gentle frame: black, with gray stripes the width of angel’s hair, with a fitted vest, tailored trousers, complementary cravat, and a black Fedora angled just so.

I looked out from my window seat on the bus from Carraroe to Galway. It was one of those old kinds that looked as if it once had a life as an elementary school bus now put out to pasture. With aluminum rails on the seats before, the bus would take off noisily, gravel scattering beneath its wheels before I had a chance to sit down. The bus driver greeted me in awkward English. It took a few rounds of greeting me in Irish before he finally realized I am an American, and his guttural salutation now came out sounding like something a little to the left of “Hiya.”

The bus rolled to its customary stop on the coast road that runs through the heart of Spiddal. There is no sign there; the stop is force of habit because years of driving this rolling route through Connemara told the driver where travelers would be standing shielded from the vagaries of Irish weather.

Heads turned as the dapper, elderly man mounted the bus. He steadied his gait with his cane and favored his right foot up the three steps then halted beside the bus driver to beam his greeting. Out of the corner of my eye, trying not to stare, I saw the man tip his hat repeatedly to the right and left as he made his way down the aisle to the vacant seat beside me.

“Nice day,” he said to me as he took off his hat and placed it on his lap. “Going into town, is it? Where you go every day?”

“Yes,” I said caught by surprise and thinking nothing gets by anybody around here.

“Kearney’s the name, Seamus Kearney,” he offered himself. “You’re an American, yah?” he asked in that way the Irish have of answering their own question.

“From the South, is it?” he continued.

“That’s a good ear you have. Yes, I’m from Memphis, Tennessee, but I spent the last five years living in Los Angeles,” I clarified.

“And your middle name then? Have you Irish connections?”

“Yes, I have Irish connections on both sides. My middle name is Ford,” I said.

“Ford,” he considered, wrinkling his brow. “That’s an odd middle name for a girl.”

“Now, the Fords, they’re from around these parts. They’re old as the hills and Irish as the soil.  Many are up the road in that old graveyard by The Centra,” Seamus Kearney said. “So they called you here, they did,” he said in more of a statement than a question.

“No, actually it was a whim that brought me here. I never knew any of my Ford relatives. Most of them died before I was born.”

Seamus drew in his breath in that audible sigh the Irish do, when they’re getting ready to say something poignant. It is a sound with a world of understanding contained: one part camaraderie, the other commiseration. “So, they called you here, they did,” he reiterated patiently. His white eyebrows raised encouragingly, as if leading a child along the road to good reason.

I couldn’t wait a second longer; I couldn’t help but ask, “Do you always dress like this?”

“Like what?” he asked genuinely unaware, which made me wonder if I’d put my foot in my mouth.

“You look so nice; I was only thinking that,” I said, the heat rising to my face.

“Pride of person’s not an unpardonable sin,” he said. “Now let me ask you what it is you do in town.”

The next thing I knew, I was explaining everything I did at my job in Galway, while Seamus gave me his rapt attention, with a pleased look on his face. Had I still been living in Los Angeles, a conversation like the one I had with Seamus Kearney would never have taken place. One simply did not divulge personal information to a stranger in Los Angeles without thinking it would come back to haunt in some unexpected way.

But this was Connemara, and the Irish have a way of exchanging pleasantries in a manner that is somewhere between an exploration of and commentary on this business of living. It is an art so subtle you have to narrow your eyes or you’ll miss it; it comes creeping softly wearing white cotton socks and sensible shoes.

The bus rolled to a stop at the Spanish Arch, down by the quays in Galway. I stood up to disembark. “Nice to meet you, Mr. Kearney,” I said.

“Call me Seamus, please,” he returned. “I live just by the church there in Spiddal. I’d love for you to call out any time for a cup of tea,” he said, with his blue eyes smiling.

“Thank you so much, I will,” I returned, and as I got off the bus to head over the River Corrib’s bridge, I turned to wave to Seamus Kearney and knew without question I would. 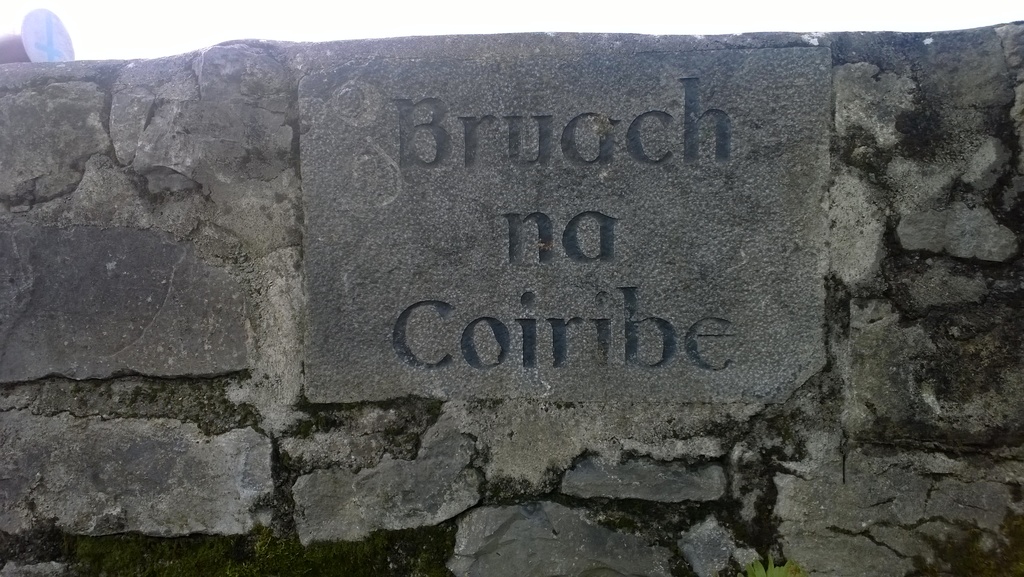 I LOVE this, Honora! You are blessed to go through life with this lyrical name!