Ireland and My Grandmother's Faith 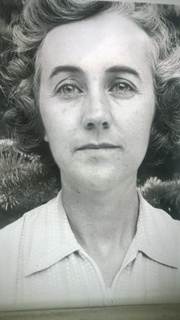 My father’s mother was named Helen Ford. She was long and lithe, narrow and fluid, and gifted with a full head of wavy hair that turned, in her later years, to a color that by-passed gray completely to shine an enviable white. Her family hailed from Tuam, County Galway, and as I write, I’m glancing up at the photograph on my wall, of her Irish family homestead. There, at least in my mind’s eye, three women stand before the white-washed, humble home, with arms entwined and blue eyes smiling. I’ve positioned the picture above my desk just so because it reminds me from whence I come.

I have no memory of Helen Ford, for she died the very year I was born. But there’s another photograph I have that means the world to me because this seraphic woman is holding me in her arms. Even then, you could see our similarities. There’s the same shape to our heads, the same light-colored eyes, and I’m told to this day of our striking resemblance.

I heard it told repeatedly, in my coming of age, that my grandmother was a devout Catholic, so devout, it seems, that when my father married my mother in a Presbyterian church in Memphis, she couldn’t bring herself to darken the threshold. It was as if a psychic force-field existed that precluded her entrance, so during her only son’s wedding, Helen sat demurely outside on a garden bench, with her legs daintily crossed, and her green marble rosary in her hands, much to my mother’s infinite chagrin.

My father’s view on Catholicism was something he never shared, but surely he knew his way around the subject, as his Irish father was also Catholic. But my father was a nonconformist by nature. He found God in the great outdoors, where His mysteries were whispered in talismans and signs. And although he wasn’t a denominational observer, my father was the most pious man I’ve ever known.

All this explains why my three brothers and I were raised in my mother’s Presbyterian faith. Kind of. I say kind of because in as much as these things should influence, after I grew up, I realized my mother’s religion didn’t actually take. Yet my pied piper of a father had somehow managed to instill in me a sense of God’s awe and wonder. I feel His presence more often than not, and I’m wise enough to know whom I serve, I just don’t have a gift-wrapped box that pleases everybody.

But my life-long friend, Tama, does -- she’s a Catholic, in no uncertain terms. I’ve always admired her clench-fisted devotion; I’ve seen it guide her unwaveringly through unspeakable times. This is how I came to visit at least a dozen Catholic churches during my last trip to Ireland: I had the good sense to bring Tama with me.

The right to light a candle

You have to know Tama. She’s of Irish blood on both sides, with an eternally young, impish look about her that’s always reminded me of a young Vivian Leigh. She is wickedly funny, maddeningly unpredictable, and I’d follow her anywhere.

“Stop,” Tama cried. “There’s another one!” I put my foot on the brake and backed up in the middle of a country road just outside Kinvara. We scratched up a gravel driveway, got out of the car, and I followed Tama inside a gray-stone, cavernous church.

The church seemed older than the land itself. It had vaulted ceilings, stain-glass windows, it reeked of incense, and echoed with every step on its granite floor. I’ve already stated I don’t have a religious box, but I do have a grand respect for the civility of ritual and ceremony. I took a seat in a back pew as Tama made her way to the front of the church, where a wrought-iron stand housed endless tiers of red votive candles.

Striking a match, then another and another, I knew what Tama was thinking. I know her family, I know her history, and it didn’t take much for me to intuit for whom the bell tolled. I was suddenly overwhelmed, watching this reverential gesture. It seemed so beautiful to me, so appropriate, so very perfect.

I thought of my brother in heaven, and rose unsteadily to my feet. For a moment, I stood questioning if I had the right to light a candle, then I thought of the woman I’ve referred to my whole life as Gaga Helen. I saw her standing before the candles, a white kerchief on her bowed head, performing an act that resonated in her bone marrow. I saw her pause for a reflective moment, then turn and walk to the pews, where she kneeled, bowed her head, and folded her hands.

It was in that moment that I suddenly knew I had the right to light a candle for Haines. When I was finished, I turned and spied Tama, in an alcove beneath a stained-glass window. She held something flimsy, plastic covered, and book-size before her. She scrutinized it with such focus it caused me to intrude upon what was clearly a private moment.

“What is that?” I whispered to Tama.

I stood for a moment, wanting in on the experience, and asked her to read it aloud. Tama moved closer and lowered her voice to recite the “Miraculous Invocation to St. Therese,” and I wept all the way through it.

It may have been that I was standing not far from Helen Ford’s ancestral home, or it may have been that something in this ancient text spoke to me of a faith so strong it kept my grandmother from her only son’s wedding. Whatever it was, it brought a sigh to my heart and a deep-seated sense of relief. But perhaps it is Ireland itself that will do this to a person: It took Ireland and Tama, and an ancient church on a country road to understand the sanctity of my grandmother’s faith. I too had 'spiritual moments' while in Ireland.. I believe I understand exactly what you felt :)

So glad to hear this from you, Fran!  Perhaps we'll hear about one of your moments when you get ready to share!

I will be preparing something soon ; )

Clare Fullerton, I know exactly what you are talking about ; with regard to your Grandmothers Faith. I too ; felt something akin to what she must have felt at her son's wedding.

You see my son was marrying  a woman who was a  Bahi; and my late husband I I knew nothing about this Faith. I prayed ; cried ; and spent many hours speaking to my local Priest ; hoping to find some comfort for the fact that my eldest son would not be getting married in a Catholic Church ................

I was not sure that I could attend the wedding ceremony , which was  held in the same Hotel as the wedding reception.

Eventually after much though and discussion with the Bahi Group and my Local Priest ; husband ; I did go to the wedding .Twenty two years later ; i am glad I did . I got to know and became friends with lots of the BAho group, I am still with some of them even thought I have moved 200 miles away .

When my son was headhunted to be the Project Manger on the Luas Line ; [the tram line that runs through Dublin now]    A couple of their friends and their parents almost adopted me and my two young sons [my husband was deceased by then ] they invited us everywhere ; took time to visit us and in general terms ; were the salt of the earth at a very bleak period in my life.

My Grand- daughter who I cherish  and love with all my heart ; and had sleep overs' with me while they were still living in England; came to the Catholic Church with me on Sundays to Mass ; helped me arrange the flowers for the Alter; for weddings / funerals -  has grown up to be a loving, caring , thoughtful young lady ; who is now studying  Medicine  in Dublin,. We are still very close ,and her being a Bahi has not been an issue . Love ; thought and care is what I look for now in people. I do however retain my own Catholic Faith  .

But Yes ; when I read your Grandmothers story ; I could identify with her pain and felt that ; stomach churning time all 22 years ago . As my Grand mother woudl say 'we live and learn '

Oh I forgot to say ; that you do look very like eh picture ; a very pretty lady ,

Well thank you! I think I definitely have Helen's eyes, although hers were blue and mine are a serious green. I loved your comment, especially the line where you said "love, thought and care is what I look for now." When I read that line, I knew you and I have similar goose feathers ( get it? Because we're both Wild Geese?) Thank you so much for your beautiful comment! I enjoyed reading it, so.

We are Irish - that's the bit that none Irish people do not get ; I get it all the  time.

Thanks for sharing Claire. Back in those days Catholics would not attend Protestant services nor weddings. I am sure others can attest.

This last trip to Ireland I felt the Faith was slipping a bit in the Irish. Perhaps in some way this is why the Pope is choosing Ireland for his next trip on the family. Ed

Ed, I'm so glad to hear you say this. I suspected my Gaga Helen wasn't the only Catholic who thought better of going into a Protestant church! And while I've got you, Ed, my mother's maiden name was Francis. Her father was Dr. Joseph Haines Francis, which I always thought was an exceptionally lovely name. Thank you so much for commenting! I've learned something here.