For 13 years I had been looking for "The Cross of Ballysheen" County Wexford in historical records and on my journeys with Google streetview.  Finally I was here at 'The Lobster Pot' at Carnsore Point which sits right on the crossroads dividing the old townlands of Ballysheen and Ballyfane.  I had quickly set up a The Wild Geese Gathering event and invited our Wexford members, but the logistics didn't work out so Jack and I had a coffee and a mini gathering.

Wexford Native and Wild Geese Heritage Partner Larry Kirwan of  'Black 47 ''volunteered' local maritime historian Jack O'Leary to help me with my family history research in the Carne area. Jack was wonderful and offered to drive me around.  The first place he took me was to the famous restaurant 'The Lobster Pot' so I could look for the 'Cross of Ballysheen' where Joseph Scallian and Margaret Doyle were married in 1783 during the last penal years in Ireland. 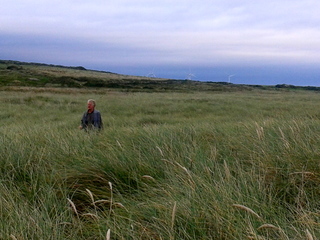 Everyone around here knew Jack and Larry so this solo Wild Goose received a very warm welcome.  Jack introduced me to his friends, and they are many, but James Maloney, formerly of the Irish Tourist Board / Failte Ireland, was a local Carne resident, historian and also an OPW (Office of Public Works) at Tinturn Abbey! 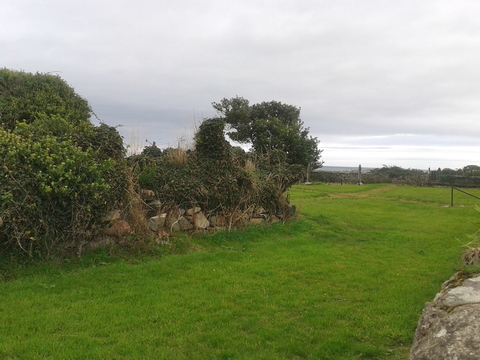 James showed us a 19th century map of the Nunn's family St. Margaret's estate farm just before he submitted it to the Wexford Historical Society and Our Lady's Island Parish in case one of my ancestors were on the tenant list.  Then he took us on an amazing road trip around the area starting with the estate and when he showed us where the tenant's thatched homes had been. I got that 'I'm home' feeling again. 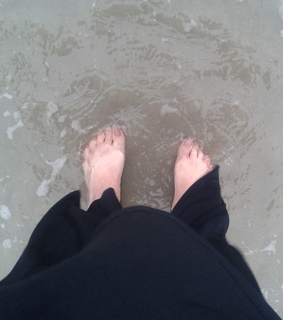 The estate took us right down to the beach and even though it was cold out I had to get my feet into the Irish Sea, even if James and Jack were yelling out to me that technically it wasn't the Irish Sea! I wanted to buy both of them a pint at the Lobster Pot.  While walking the area I shared with James how long I have wanted to see the area that was known to have old cottages on it, but is now private property. He disappeared for a bit while I walked down the road then he came running back calling to me  'let's go!"

James got permission for us to go into the farm to look around and a member of the family directed us to a field and an old path, once known as the 'church path' that led down to the ruins of the old cottages! It was like living inside the dream I'd been dreaming for 13 years. We clambered through the field and there it was the 'church path' which we figured went straight to Our Lady's Island Church. There were many baptism and marriage records stating they took place at Ballysheen but also in the many crossroads, priest's houses and homes. It was the late 1700's and the penal laws were waning and I would imagine Our Lady's Island went underground at that time? I am happy I found the marriage record specifically stating the 'Cross at Ballysheen' that led me to this crossroad, a spot many drive by but was a very special place for the families that lived here. We went back to my waiting Guinness and then I realized that I was having my Wexford Gathering after all!  So here we are Jack, James, me and the owners Ciaran and Anne Hearne at The Lobster Pot in beautiful Carne, Wexford.

The sun was setting and James wanted to get me into the Lady's Island cemetery. In the Wexford Library's Cantwell's Memorial book of the dead, I discovered not only a lot of Scallians buried there but one family of Johnsons who had all the same first names as the first few generations of my Bear Cove, Nova Scotia Johnsons. My goal for this trip was to follow a hunch that Andrew Scallian, who seems to have arrived in Halifax, Nova Scotia, alone, son of a Joseph Scallian and Margaret Doyle  Co. Wexford was related somehow to William Johnson who also 'arrived' from Co. Wexford. William deeded half a 100-acre lot of his prime oceanfront property in Herring Cove to Andrew the year Andrew married. A Johnson/Scallion marriage resulted in one of my branches, so here I am.

While I was in 'my office' or the front desk on the research floor of the Wexford library, I met historian Brian Cluer (who is now a WG member) who introduced me to Rex Sinnott (also a new WG member) in New Zealand. I soon discovered that Brian was the author/editor of The Carnsore Chronicles, a site I have spent many hours on for the wealth of research on the history, people and places of Wexford it contains.  Rex has added the Scallian research I discovered to the Scallian data base on his Sinnott Genealogy site, so with all these amazing guys I am finally getting closer to making a real connection across the pond.

Just south of Ballysheen we often drove by a standing stone in an area called Logansherd.  James said the name meant Long Stone and there were many before the farmers removed them. Another of my goals was to visit druidic sites, especially in the areas my ancestors lived in, an adventure that had a whopping start when I was in Wiltshire prior to coming to Ireland.

This is from Our Lady's Island:

"One famous pagan shrine, possibly a temple to the sun, stood at Carnsore Point where a natural stone structure is believed to have been a Druid's altar. In Penal times this was used as a Mass Rock.

In a list of Irish place-names published in Iris-Leabhar na Gaeilge in 1903, the Irish name for Our Lady's Island is given as Cluain-na-mBan - 'the meadow of the women'. Considering that this locality was the centre of druidical worship, it would not be far-fetched to suggest that Our Lady's Island was in pre-Christian times inhabited by female druids."

This is from The Carnsore Chronicles: "A 23 ft. long “giant’s grave”, a dolmen (a Breton word), is marked on the six inch Ordnance Survey map 53 that datesfrom 1841.  The map places it near the location of the present windmill number six on Carnsore Point."

In 1979, the first in a series of anti-nuclear protests and free festivals were held on Carnsore Beach.  It was where two of the organizers met for the first time, my new BFFs, James Moloney and Jack O'Leary.

I was hoping to record Jack's recollections when we were here at the Windmill Farm, the site of the original protest festival, but it was cold and raining and we were pressed for time.  He had told me some wonderful stories though driving along in his old RV of how they pulled it together with no money and Christy Moore.

Another person there at that first protest was The Wild Geese Admin Anna Porter's partner, Barne, who was our driver for most of our trek around Leitrim, Sligo and Fermanagh.  Apparently it was the place to be in 1979 ... old hippies make the best people -- the druids would be very pleased indeed!

Comment by James Richard Johnson on December 19, 2013 at 4:47am
Great article. Only one Johnson family.....hmmmm

Oh Richard I am waiting, as you are, with baited breath for your Y-dna results and especially after Tyrone Bowes ofIrishorigenes.com analyzes them ... although when Tyrone reported back on cousin Danny Martin's what an eye-opener...Scottish borders!  Yes one family but a couple of scallions involved with I think 3 Johnson sisters.  I will have time over the holidays to sort them out.   Don't forget to say hi to him for me and tell him you are another 'cousin' lol

Stirring, fascinating reading, Alannah. I'm thrilled that you made the trip and two, could share so much of the excitement, color and details with us.

Wow I'm in  Irish Genealogy heaven!  My cousin Richard Johnson (WG member) in New Brunswick just got back his Y-DNA test results and the two top matches are both Scallans!  My hunch has been right all along.  Richard  contacted them and they said their Scallans were from the Carne area.  He just emailed the results to Dr. Tyrone Bowes of IrishOrigenes.com to get his analysis for us.  This is huge for us after so many years.  We are now thinking that our shared ancestor Lawrence Johnson of Wexford was actually a Scallian/Scallan and adopted by William Johnson which means we aren't Johnsons???  lol

What an amazing gathering ...and trust me there was more than just yourselves gathered there at the crossroads... couldn't see them ...but to be sure you felt them...and they had a hand in how it all played out

Bit you gave me goosebumps again!