Don Mullan, author, humanitarian and Christmas Truce ambassador, stood in front of two graves in Messines, Belgium. On the left was Private T Delaney of the Royal Dublin Fusiliers, who died on Christmas Eve 1914 and on the right, was Private M Murphy of the same division who died on December 30th.  It was a charged and emotional moment as he spoke of the 1914 Christmas Truce. That first Christmas in the war that was to end all wars and had already broken another promise of being over by Christmas. The gap in the dates on the two gravestones indicated that the truce, or at least the death toll, had temporarily stretched for five days. In a war that killed 13,000 men a day, this was a significant easement. Mullan said if the dead solders could talk, they would exhort the living to live, live, live. We, the Waterford Omagh Peace Choir, sang Red is the Rose with difficulty. Everyone was obviously and visibly upset, especially the very youngest members, and we struggled through the verses. This moment had been four years in the planning and the choir carried its emotion in the song.

The 1914 Christmas Truce is well documented at this stage. It is said a young German tenor sang Silent Night or Stille Nacht, prompting the Allies soliders to sing carols in return. Tentatively, solders from each side emerged from the trenches and exchanged cigarettes and brandy. They showed the ‘enemy’ pictures of their loved ones. They played a game of football with the Germans winning 3-2. It is one of the more extraordinary and poignant stories to emerge from the senseless slaughter of millions, 18million to be more accurate, before the carnage finished.

It had been intended that Jeffrey Donaldson and Martin McGuiness would accompany the choir but the talks breaking down in Stormont had put paid to that plan. Instead, Brenda Hale, MLA, joined the 40-strong choir on our trip. Her story moved us deeply. Her husband had been an officer in the British Army, but had been killed fighting in Afghanistan five years ago. Her profound dignity and sorrow touched us on a very personal level. She spoke movingly of the sacrifice her family had paid for the price of democracy. In Brenda we could see the human cost to war, any war.

The choir itself had been founded out of war and the Omagh bombing in 1998 when Phil Brennan, musician and writer based in Waterford, reached across the divide to use music to heal. Over the years the choir had grown to encompass singers from Tullow, Wicklow, Gorey, and even Clare when renowned tenor Jerry Lynch brought his haunting version of A Silent Night to the mix.  The choir had been singing this concert for the past four years and finally had arrived in Messines to give the ultimate Christmas Truce concert.

Messines is the smallest city in Belgium and suffered horrendously during World War 1. The entire city was raised to the ground, with only the crypt of St Niklaas church remaining. During the war, the crypt was used as a medical space and a young Bavarian officer was treated for gas inhalation there. He felt it was dishonourable to greet the enemy that Christmas day. His name? Adolf Hitler. The choir visited the crypt and its cold felt even more oppressive with this story. We sang Silent Night in the chill air as if to stem the horror of the memory.

Messines is significant for Ireland as two Irish Divisions fought side by side in the battle of Messines Ridge in 1917. Catholic and Protestant from the 36 Ulster Division and the 16 Irish Division fought together and suffered terrible losses. Indeed, three old boys from my Dublin school, The High School, perished on that very battle field: Corporal William Francis, Captain George Porter and Captain Charles Alexander. There are links everywhere that cannot be severed or ignored. In 1998, ironically the same year as the Omagh Bombing, The Island of Ireland Peace Park was unveiled. The park was built by young people from Ireland to commemorate the Irish soldiers, north and south, who perished during World War I.  We visited this beautiful and simple park with its stunning round tower – the slit windows that only light the interior on the date of the Armistice – the eleventh hour of the eleventh day of the eleventh month. There we formally changed the name of our choir from Waterford Omagh Peace Choir to the Island of Ireland Peace Choir in the presence of the Mayor of Messines.

Afterwards we travelled to St Matthew’s church to give our concert. We sang from our hearts, the memory of the graves of the solders still in our thoughts and none more so that the tragically engraved stones for unknown solders bearing the inscription – A Soldier of the Great War – known unto God.

We also sang at the Mary McAleese Christmas Truce Lecture in Iveagh house the following Tuesday. 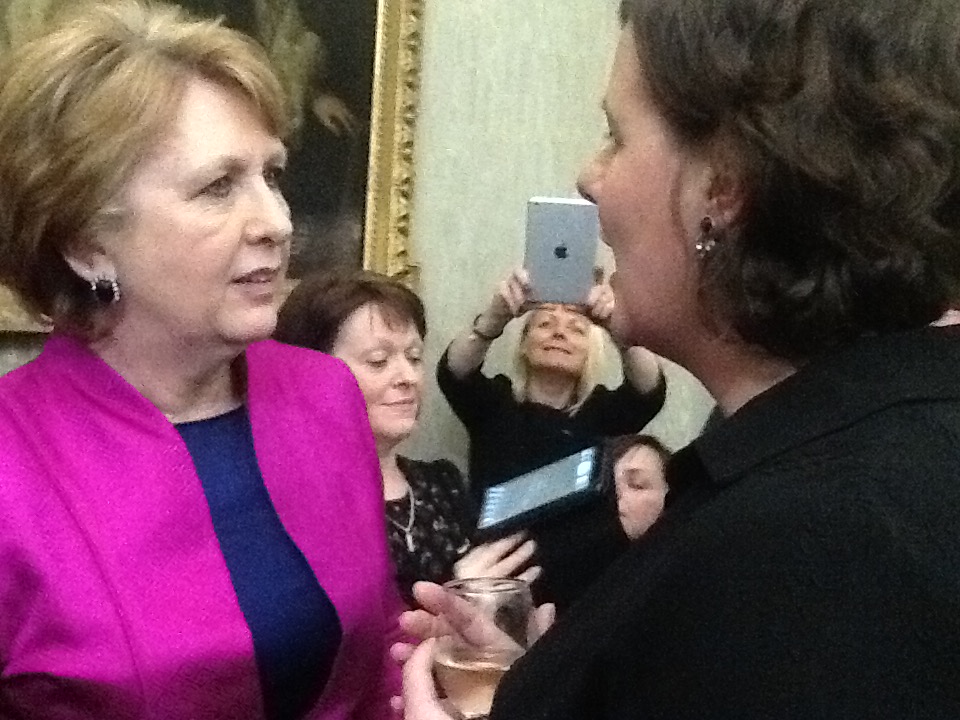 Excellent!  Thanks for sharing this with us, Jillian.  A very happy Christmas to you and your family.

Jillian, thank you for sharing your experience at Messines. I found the Christmas Truce a very poignant chapter in the history of humanity. Glad to see these efforts to make it better known. I talk about it in this presentation, which I delivered five years ago: http://thewildgeese.com/video/the-christmas-truce-of-1914-when-enem...