Records show that her father was listed as a Woolen Draper, a Wine Merchant and a merchant between the years  1768 - 1793, some sources claim that he was a  Lieutenant in the Royal Navy, and sat on the Merchants Guild on Dublin’s common council. 1777-1783... Given that she was born into what would be considered a middle-class family in this era, she did have a very good education and excelled in Literature, Drama and as well as being well-read in  French, Italian and English.

Matilda met Theobald Tone when she was just 15 years of age, through her brother Edward, who a friend of Wolfe Tone, and it is noted in all records that he adored her from the time he set eyes on her,  quote “  she is like an angel, and I soon found myself falling passionately in love with her “ .... a love that would last his lifetime and hers. By the time she was 16years of age, they had eloped to get married.

At this time, she lived with her elderly grandfather who was a Clergyman, and much to the dismay of her grandfather and her family [who changed her name to Matilda at Wolfe Tone insistence,] eloped with Wolfe Tone. However, her grandfather relented and gave them £500 as a dowry. They married in St Anne’s Church 21st July 1785 Dublin honeymooning in Maynooth, and when they returned to Dublin, they spent time living with Matilda parents in Dublin and when his father became bankrupt, he and Madelia went to reside with his father in Bordentown. For many years they moved between Dublin and Bordentown, always depending on what or where Wolfe Tone was studying or planning rebellions.  His brother Edward never forgave Wolfe Tone. ...The rest of her family came to terms with their marriage and she always remained close to her sister Kitty, even when Matilda was forced to leave Ireland, in later years., with Wolfe Tone, they corresponded on a regular basis. 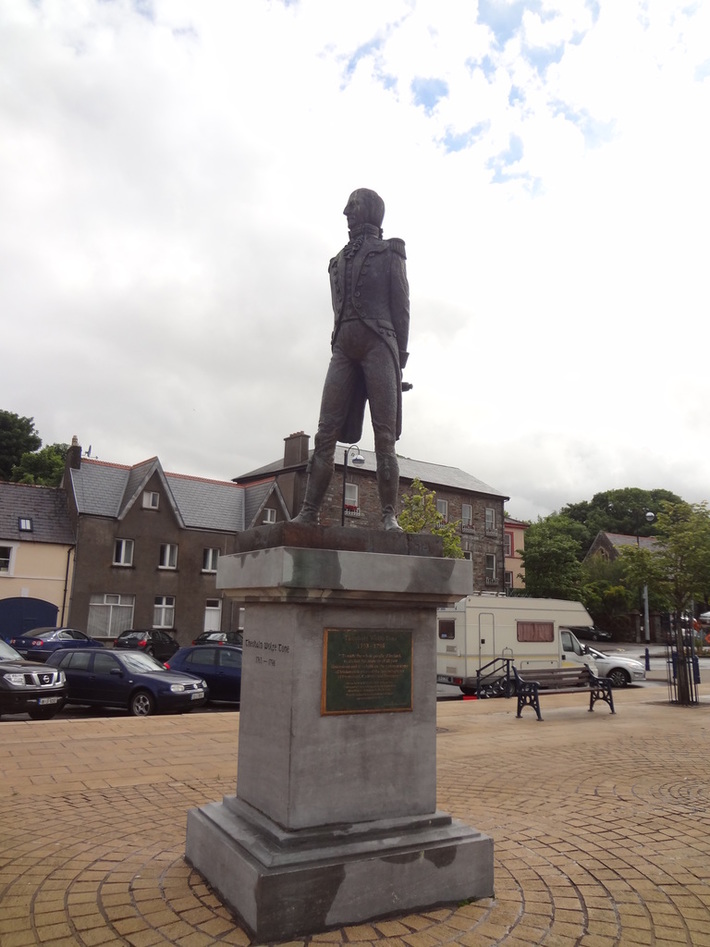 Matilda’s and Wolfe Tones' first child Maria was born in 1786, followed by  Richard, a son who died in infancy. At this time Wolfe Tone had planned to travel to London to study for the bar, and once again Matilda was left with his parents who helped her look after his child  His studied in London from 1797-1788.

When he returned to Ireland they had two more sons, William Theobald Wolfe Tone   April 1791, followed by  Francis Rawdon- Tone  June 1793. By this time Wolfe Tone Uncle Jonathan Tone had died and left him a cottage in his will, in Bordentown. So not unsurprisingly, they went to live there. They called the cottage “ Cháteau Boue “, [ meaning mud hut ] and they lived there until 1795. During this time Wolfe Tone had been under heavy surveillance for some time,  from Irish Government, for having written pamphlets,  and lots of other documents that were considered to be seditious material,   while also belonging to Catholic Conventions, and not least the United Irishman, and he was considered a danger to the Parliament of Ireland...Hastening his downfall was the fact that Rev, William Jackson had been arrested and convicted of treason, for having given documents written by Wolfe tone to a Barrister called Cockayn, who was a spy for Parliament.

So with the support and assistance of people, he knew in  Parliament with sympathy for his cause,  and other trusted people, Wolfe Tone made arrangements for his family and himself to flee to the USA where they settled in  Princeton New Jersey, aided and supported by other Irish  Radicals. With Wolfe Tone always in meetings and planning a revolution from the USA, Matilda carried on just like she had always done, raising and educating the children, Wolfe Tones steading rock and confidant, never erring from her comment to him. When Wolfe Tone had gained all the introductions from the French Ambassador to the USA that he needed, to help secure support from France for an invasion of Ireland, he set sail for France, and once again Matilda was on her own.

However eighteen months later she joined Wolfe Tone in  Europe , gong to live with Colonel Henry Shee at Nanterre, cousin of Wolfe Tone, who was only too happy to assist Wolfe Tone and his family in there  attempt to overthrow Irish Parliament [[as France were at war with the Crow a as well ].. The family later moved to Challot in the suburbs of Paris. And then, once again, Wolfe Tone left her in France when he went on his mission of attempting to overthrow the Irish Parliament. This is where she was living when she heard of Wolfe Tone's arrest and death. Unable to return to Ireland for his funeral, for fear of her being arrested, she set about making life in France comfortable for her children ..Grieving all the while on her own, her sister Kitty wrote to her often during this period, Edward who had visited Wolfe Tone in Prison 1798  had promised that he would look after Matilda,  and the children but reneged on this.

Then Matilda moved to an apartment at 51 rue St Jacin the Latin quarter, to be close to her son William who was attending  Lycée-le Grand school there. Colonel Henry Shee, helped her secure a pension of 1,200 francs for herself and 400 francs for each of the children May 1803... Sadly, her daughter Marie died of tuberculosis in April 1803. Then, once again death knocked her off her feet when Frank died of tuberculosis in 1807. Willian was displaying symptoms of the disease as well, which prompted her to move to America 1807 where she felt they would get better health care.

While in America,  Matilda and William tried to sort out Wolfe Tones' affairs, which had been entrusted to James Reynolds, a friend of Wolfe Tones. James Reynolds, however, had been suffering from Senility issue’s and they were only able to recover few of  Wolfe Tone's pre-1795 diaries, and all of the post-1795 letters and diaries, which they then added to the autobiography she already had in her possession. They were all addressed to her.

By 1810 Matilda had returned Europe, specifically to gain support for William ‘s entry into the very prestigious Cavalry Military School ...  She used her considerable influence within the French Government to elicit the support of Talleyrand Périgord Prince of Benoven, and Napoleon Bonaparte who knew Wolfe Tone to enable her, in her endeavours do this.  So when William was enlisted into this prestigious Military School as a cadet, she moved the Hôtel de la Surintendance.to be close to him. She went even further and used her influence again, to elicit support from Napoleon Bonaparte, to have her William receive French citizenship and  the very privileged status of "élève du gouvernement." [ student of the Government]. He rose in rank to become Lieutenant in the 8th Chassseurs. So Matilda once again moved back to Paris on the rue de Lilli. Later moving back to the Latin Quarter. After the defeat of Bonapart in 1815,  William tried to gain entry to Ireland but was refused.

Because William had been rejected entry to Ireland, she then made the decision to marry her old friend and confidant Thomas Wilson a businessman who had taken care of all of Wolfe Tone's financial affairs since his death. Edward her brother having reneged on his promise to look after her and the children ... They visited Scotland to see Wilson extended family before emigrating to the USA with William, once again, living in New York for a while before settling in Georgetown 1817

Thomas Wilson died in 1824. And the final blow came when William died of Tuberculosis in 1828 leaving a wife and daughter.

Matilda stayed on in Washington, becoming something of a celebrity,  much a she had been in French Royal and upper-class Society, which she was able to use to her advantage in securing Wolfe Tones' place in history. Speaking at events and in general terms promoting Ireland's freedom from The Crown. A remarkable woman who used her beauty, skills and her education, to her advantage in being the wife and mother and confidant to one of Ireland's most revered and remarkable men Theobald Wolfe Tone,  never erring from her  care and compassion or him and their   joint commitment for  Irish Freedom from British rule

When been Matilda died in March 1849, now aged 80 years of age, her status in life was reflected in death with the French Ambassador, American Generals, and quite a number of representatives from Irish American society paying homage the in death as in life. Matilda was initially buried in Marbury Cemetery, Georgetown, near her son William.  However, that Cemetery was sold and she was, her great-grandchildren re-interred here in Green-Wood Cemetery, Brooklyn, New October 1891, a  new monument was dedicated to her, and in 1996, needing repairs, the local Departments of Graves restored it to its full glory.

PS. In the mid -1830. A Historian R.R.Madden, visited the USA  for the sole purpose of doing research on any the exiled survivors of the 1798 rebellion. He was in the process of writing his monumental history of the United Irishman, and for reasons that later historians cannot comprehend or explain, he did not speak with Matilda. Later historian Frank Mac Donald   would  write,“ Madden missed a major opportunity to add and her personal contribution to history and  called it ’a misfortunate  error’

PPS, Being interviewed by Charles Hart 1824  an Irish Journalist, she spoke of Bonapart, and his brother Lucian, who was the most caring of the Bonaparte family Matilda advise him not to emigrate and spoke longingly of Dublin, Grafton Street, Trinity College and how it was Wolfe Tone who instilled her love of her own country into her. Do not expatriate yourself, you will be leaving your soul in Ireland, adding that is where my heart and soul are.