I'd been in the U.S. a number of times but this time, it was so different.  This time I did not have to pay to stay in any hotel, this time I was 'kept'/put up in people's homes.  People I had never met took me , kept me, arranged meetings for me. I had the most incredible holiday of my life.  I stayed with Janet, Cassie, Sue & Joanne.  People came from all over to meet me, one man even drove 800 miles, I was amazed. It was incredible.  I met *very* important people in the genealogical world but then, that doesn't really matter cos the ordinary people are more important to me.  I have a different friend, 'Edna'.  I've never met Edna, but I have telephoned her.  She's an older lady and I think I'm going to take the parish records for counties that her most unusual surname was found in and go through them, and maybe, we'll keep our fingers crossed, just maybe I might be able to point her to a possible place that her ancestors came from.  The Edna's of this world are more important to me than the 'important' people.

Outside of that - my friend Janet, she did incredible research and she wrote a book.  She didn't just research her own surnames she has a ton of information on other surnames as well, because she worked with a graveyard.

I couldn't possibly begin to explain to you all the work she did except to say I was always extremely impressed.

The 'laugh' about it is that I got to the airport that Janet and her husband Paul picked me up at - and for me, it was the middle of the night my time, I just had to go to bed.  Then, next day, I woke up real early and sat there with the book reading it so's I'd have some idea of what Janet had done and there it was, she had named me in her book.

Back then I said to Janet, "If we could put your stuff and my stuff together, God knows, we could probably bring an awful lot of people home"

and Janet is coming over exactly for that reason, to go through graveyards and find people - and yes, she is lucky that she has me who has worked many of the graveyards she is interested in as a friend - but then, I'm lucky I have her as a friend 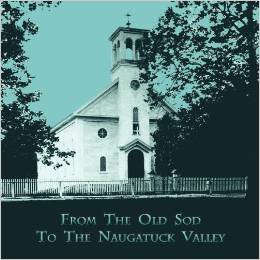 Her book is called "From the Old Sod to the Naugatuck Valley" and I'm posting an extract of the Amazon words re her book below.

Maher and Meagher - these last few days I've been trying to put together collections from my own data, Mahers and Meaghers to give to Janet

That's my spiel for tonight - the sun is shining, I think I'll go sit out for a while

Amazon Extract: Beginning from an interest in her own family's history, with From the Old Sod to the Naugatuck Valley Janet Maher shares a deeply textured journey through a fascinating corner of the Irish Catholic diaspora. She explores the history of Ireland through the perspective of Catholicism, bridging it to the origins of Catholicism in Connecticut generally, then to several Irish families whose personal stories extend to the present. Mapping and thoroughly transcribing the oldest Catholic cemetery in Naugatuck, Saint Francis, Maher has made connections between generations of families and friends. The book includes selected marriage, baptism and death records throughout the nineteenth century and excerpts from rare letters between Irish immigrants and individuals still in Ireland. It is replete with photographs from Ireland and Connecticut, and restored personal images selected from families' collections, including her own, from materials safeguarded in scrapbooks and albums for years. In many ways Maher has made the people whose graves she encountered in cemeteries come alive again.

Sounds like a lot of work went into a great book and a lovely friendship ensues Jane. How nice! I'd love to find that kind of help in my search for my Irish ancestry. Lucky you! :)

As a matter of interst, tell me about your problem - an no, I'm not going to say I will solve i for you

Good Lord Jane! No wonder you are appreciative of things!

I'm just having trouble finding a birth record for my gr-grandmother. I know my Gr-gr-grandfather came from Mayo, near Westport and I'd like to find that solid connection to my closest ancestor that was born in Ireland! Her name was Annie Menton and she was born in 1854 to John Menton and Annie Cannon and married Luke Gibbons in June 1885 in Toronto. Once I make that connection, I will have what I want :)

Fran - u know a certain amount.....I'm very sorry for asking but what records have you actually looked at

I have mostly used FamilySearch.org as it's free, but I believe I've also used Ireland Reaching Out and others. I've browsed so many and would have to go back and check emails and records to remember.

Wow Jane, the tables have turned a bit. You sound a lot like those Yankees going on about how nice it was to visit Ireland.  ;-)  Thanks for all you do, I still like reading all about your wanderings and listening to the musings.

Most libraries have a free access to Heritage Quest that you can even access at home using your library pin number and a password....that may add a bit to your researching.

I have been researching my Maher/Meagher line for a long time but to no avail.......I can't find anything to indicate where they originated.  Once in the US she married a man, Edward Carroll  "probably" from Tipperary or Kilkenny.....I am baffled as to where to look now.....

1864 - 92 references in the Griffiths Primary Valuation.  Surname occurred in Clare, Galway, Kilkenny, Laois (Queen's Co.), Offaly (King's Co.), Tipperary&  Wexford.  I'd nearly be inclined to think that she came from Clare given that hubby was a Mayo man.

If you don't know the Griffiths Fran, then it's a land registration for tax purposes and would have been 'created sometime between 1840-1860.  It would be worth your while looking at it.

Searchable and based in Ireland.  When I looked for Menton, all I did was key in the surname and I ignored all the other boxes not filling in anything else is ok if you don't have a really popular name like O'Brien

Here is a link to the Search page