Or was it a German agent or Nazi sympathizer? Or perhaps a French national outraged over the British sneak attack on the Vichy France's fleet outside Oran 24 hours earlier, coupled with Britain’s seizure of French naval vessels earlier provided ‘safe haven’ in British ports.

This British ‘sucker punch’ took more than 1,300 French lives in one day and reignited France's centuries-old Anglophobia that would cost America and Britain dearly. In the early days of the November 1942 British and American invasion of Vichy-held North Africa, the French military resisted furiously, killing hundreds of US personnel and wounding hundreds more.

NYPD Lieutenant and writer Bernard Whalen posits that the bomb may have been planted by Britain itself, to convince Americans that their best interests lay in joining Britain in the war against Nazi Germany.

The list of suspects remains long to this day!

On July 11, at 10 a.m., next Saturday, the deaths of bomb squad detectives Ferdinand Socha and Joseph Lynch, 33, (pictured here) will be recalled at a memorial service at the site of the bomb blast, in Flushing Meadow Park, near the Queens Museum of Art, in New York City. (Read about the ceremony here.)

Below: The scene at the New York World's Fair, July 4, 1940, after a time bomb detonated after NYPD detectives Fred Socha and Joseph Lynch attempted to defuse it.

Read more about the incident using the resources below, and share your own thoughts (and possible suspects). There remains a $26,000 reward for the bomber's arrest and conviction.

GerRegan.com Across Fairground, Echoes of a 75-Year-Old Bombing 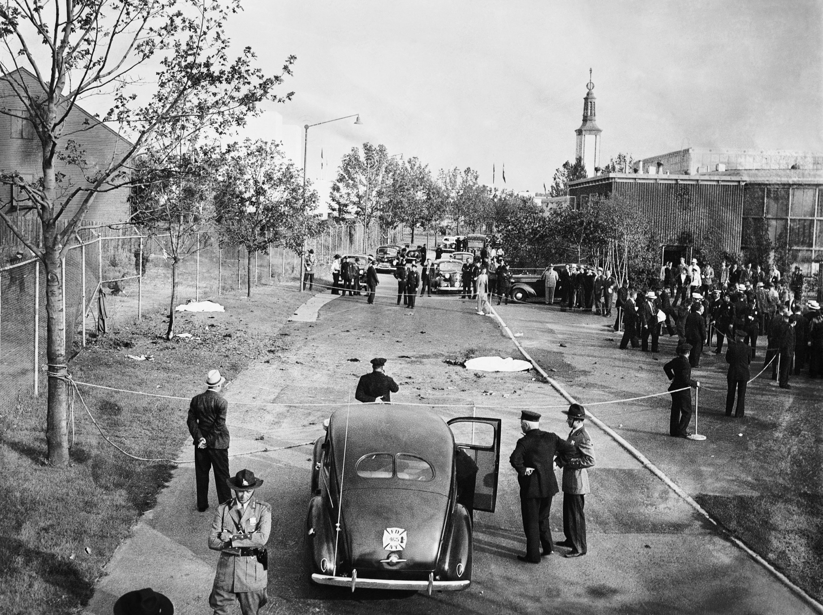